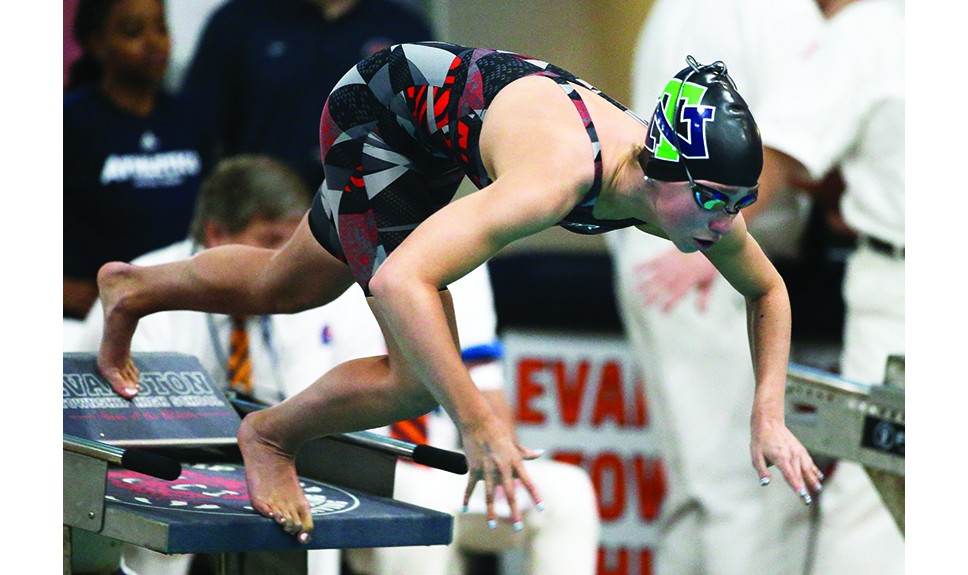 REVVED-UP TREV: New Trier Township High School sophomore Carly Novelline, seen here at the start of a heat at the girls’ swimming and diving state meet last fall, sped to first place in the 100-yard backstroke at the Highland Park Sectional last weekend. Her time of 55.34 didn’t just supplant a pool record; it also ranks first among all state qualifiers in the event. PHOTOGRAPHY BY JOEL LERNER

He makes his girls complete rounds of box jumps, among other exercises that make the heart race.

“I’m not very good at those,”senior Katie Lipsey— a very good diver—admitted after a sectional meet at Highland Park High School on November 16.

Teammate Erin McNally, another senior and another Trevian standout off the boards, had exactly 468.5 reasons to thank Kimball for his new emphasis in between meets. McNally tallied that many points— a pool-record total, to boot—to capture the sectional diving title and land an automatic state berth.

McNally earned a slew of 7s from judges on her 11th and final dive, one with a 2.3 degree of diffi- culty, to stave off runner-up and former pool-record holder Allison Landis of Vernon Hills High School. Landis scored 464.8 points, ahead of Lipsey’s third- place 452.8.

“Bruce,”a grinning McNally said,“is making us do cardio to make sure we’d be able to escape a Zombie Apocalypse if there is one.”

Swift NTHS members of swimming coach Mac Guy’s crew touched first in seven of the meet’s 12 events—and set seven pool marks. Sophomore Carly Novelline and junior Greta Pelzek each won two events, with Novelline clocking a 55.34 in the 100-yard backstroke and a 51.21 in the 100 freestyle, and Pelzek topping the fields in the 200 IM (2:04.58) and 100 butterfly (55.26).

Sophomore and reigning 100-breaststroke state champion Kaelyn Gridley finished runner-up (1:03.01) in that event at the sectional after zipping to a meet- best time of 23.81 in the 50 freestyle.

The quartet of Leslie Wendel, Ohr, Sanderson, and Novelline silvered in the 400 free relay with a state-qualifying time of 3:30.36.

Wendel, a sophomore, and her identical twin, Alexis Wendel,now officially share more than a DNA.They tied for fourth place (1:52.66) in the 200 free and got to mount a starter’s block together to receive their medals.

“Wild, so wild, the twins finishing with the same time,” Guy said.

Senior Audrey Richardson and freshman Charlize Escasa also extended their seasons last weekend. Richardson motored to state-qualifying berths in the 100 backstroke (third place, 57.09) and in the 200 IM (fourth, 2:08.15), and Escasa placed fourth in the 100 breaststroke (1:05.85).

The LFHS freshman’s bathing cap slipped off her head near the end of the 500-yard freestyle race at the Highland Park Sectional on November 16.

“It happened to me before,” a smiling King said, alluding to the time her cap fled her head in a 5K race. King also qualified for the state meet in the 200 freestyle (sixth place, 1:53.47) and as a member of the Scouts’ 200 medley and 400 freestyle relays. Ashley Updike, Kendra Joachim, and Lauren Kingsley joined her on the former (fifth place, 1:47.47), and Updike, Isabella Lewin, and Joachim followed King’s lead-offleg on the latter (third, 3:32.27).
Joachim and Updike, like King, each went 4-for-4 at the sectional; Joachim and Updike also qualified in a pair of individual events—Joachim in the 200 IM and in the 100 butterfly, and Updike in the 50 freestyle and 100 freestyle.

“We haven’t had a bad race yet,” LFHS swimming coach Carolyn Grevers said proudly near the end of the meet.

The Scouts’ Athletes with Disabilities entrant, senior Julia Tanna, advanced to state in four events. Scouts sophomore Taylor Cekay was a victim of a highly competitive diving season. Her sixth-place point total of 400.15 missed at-large status by a handful of points. Normally, a sectional score of 380 is good enough to earn a spot at state.

HIGHLAND PARK HS: Coach Tim Sirois’ Giants did not earn a state berth, but senior Selin Sonmez and freshman Emma Hartman each swam on a pair of top-six sectional relays in the home water last weekend. The two Giants linked with sophomore Alexandra Goldin and freshman Adriana Mendoza to post of fifth-place time of 1:40.32 in the 200 free relay; they later collaborated with senior Lillian Fleisher and freshman Quincy Winston for a sixth-place showing (3:49.09) in the 400 free relay.