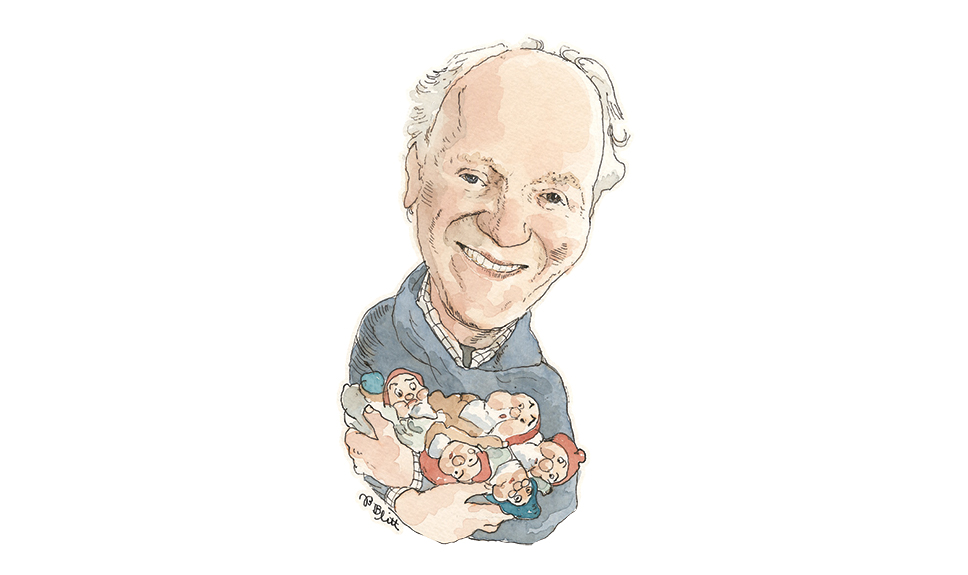 Just after his 80th birthday, a very spry Toby Nicholson scrambles up to his attic to fetch the handmade marionettes he now holds in his arms. Sleepy, Doc, Dopey, Bashful—all seven of Snow White’s dwarves are here, lovingly hand carved out of wood by Nicholson’s grandmother.

“She was an amazing artist,” says Nicholson. “And she made these for me when I was a little boy—when she learned that I loved marionettes.”

For Nicholson—who spent 30 years teaching dance and drama at New Trier Township High School, still performs television roles represented by Gray Talent Group of Chicago, and is now nearly two decades into co-directing and choreographing shows for Children’s Theatre of Winnetka (CTW)—the puppets are a sweet connection to his earliest beginnings in a theatrical life.

“I was in third grade,” Nicholson recalls, “when I saw a production featuring marionettes at the children’s theater in Baton Rouge, Louisiana, where I grew up. I was fascinated with them!”

So was one of Nicholson’s best friends, a little girl named Kitty. Together, the two started collecting marionettes and putting on puppet shows at their homes. Kitty’s father built a stage, and the children wrote scripts, built sets, and created costumes for a growing assemblage of puppets. Within short order, their creative play spilled out to community audiences.

“By fourth grade, we were going all around town putting on shows,” Nicholson says. “At the library, at school, at birthday parties…we were sort of a big thing,” he laughs.

“We did those shows all the way until seventh grade. It was a great entrée into live theater. By third grade, I knew that’s what I wanted to do with my life.”

Nicholson transitioned from puppet theater to performances with the neighborhood kids, casting, directing, building sets, and costuming plays. “We did Alice Through the Looking Glass,” he says. “And another year, it was a play called The Joke’s on the King.”

He also started auditioning and landing roles in community theater with his mom and his brothers. “One year, for The Wizard of Oz,” he says, “my mom was Glinda the Good, I was Scarecrow, and my little brother, Toto.”

At about the same time, Toby’s natural ability for dance emerged. “I was in show after show at the children’s theater, and the director kept saying, “Oh! You move so well—I should choreograph a dance for you.”While that never happened, Toby remembers thinking, “Gee, I’d really like to dance sometime. But back then, no boys in Baton Rouge took dance.”

So when one of Nicholson’s neighbors, a ballet dancer taking classes with a touring production of Aida, heard of his interest, she taught him one of the dances from the ballet.

From there, Nicholson headed to college as a theater major, first at Carnegie Mellon, then at Northwestern University, where he got both his undergraduate degree, and later, his Masters in Dance Education.

Early in this progression, says Nicholson, “I thought, you know, I feel like I’m a better dancer than actor. So I started taking ballet from Edna L. McRae who was a formidable force in dance in the city.”

The classes with McRae honed Nicholson’s dance skills so well, that when Sybil Shearer—modern dance maverick and another giant in the Chicago dance community—saw Toby in a show at Northwestern, she came backstage to ask him to be in her company.

Nicholson agreed. In the 20 years that followed, so did dozens of shows in summer stock with Herb Roger’s Music Theatre in Highland Park. He appeared in Guys and Dolls with Tony Bennett and in The Music Man with Van Johnson, among other shows. And he met his wife Juanita, (also a dancer in the company.) In 1961, Shearer handed the reigns to the Winnetka branch of her school over to Toby and it became the Toby Nicholson School of Dance and Musical Theater, meeting at the Winnetka Community House. During this period, Nicholson also met Bill Peterman, the head of performing arts at New Trier. “At that time, there were no dance classes for boys at New Trier. So Bill asked me to get a teaching certificate so that I could teach the boys. Being hired at New Trier meant I could teach both theater and dance. And part of the deal was that I would choreograph the school’s musical. I thought, “This is so fine—I’m in heaven.”

At New Trier, Nicholson taught hundreds of students and directed, choreographed and/or did sets for about 100 plays, developing relationships and bonds that have endured. “I never met a kid I didn’t like,” says Nicholson, whose easygoing personality and belief in theater as a medium for the development of young people has never waned.

“I’m kind of a Pollyanna type,” he says: “I think theater is good for all kids. Many come because they may feel lost, that they don’t fit in, or don’t yet know what their niche is. I always do my best to provide a secure base for the kids. I did at New Trier, and I do now at CTW. Working with the children, I really get to know them, their parents, their families … we become very close.”

As testament to those bonds, the production of A Christmas Carol that Nicholson puts on every other year at Community House of Winnetka, is largely cast with Nicholson’s former students. This year, for example, Tim Walsh, a Nicholson protégé, stars as Scrooge. And Nicholson’s son Christopher, is back in the role of Fred.

Working with longtime musical collaborator Bob Bowker, the Christmas Carol Nicholson has crafted for this year’s performance, stays true to Dickens’ classic tale. “I worked very hard to stick with the story,” says Nicholson. “The only tangents I go on are expanding scenes from the book that work very well as dances,” he says.

Among these? A fanciful ice dance built on a scene in the story where Bob Cratchit skates with kids, and spooky choreography capturing the sky full of spirits Scrooge sees through his window.

“I never get tired of doing this,” Nicholson sums, on his way to another rehearsal. “I really am doing everything I enjoy, and I plan to keep at it as long as I can.”

Toby Nicholson’s original production of Charles Dickens’ A Christmas Carol is being presented at The Community House of Winnetka at 3 p.m. and 7 p.m. on Saturday, December 7 and at 1 p.m. and 4 p.m. on Sunday, December 8. For tickets, visit mycommunityhouse.org.