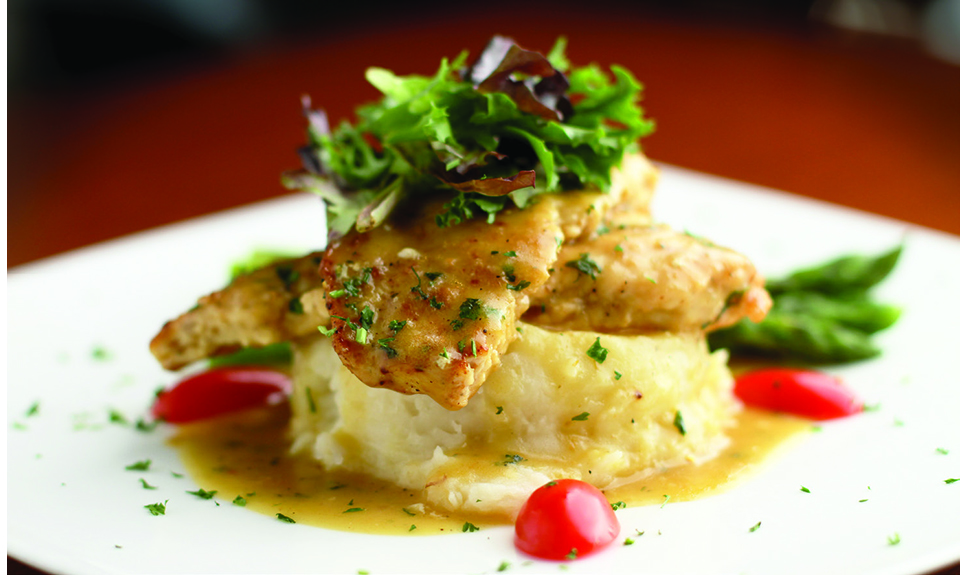 When beloved North Shore restaurateur Patrick O’Neil opened Little Ricky’s in Winnetka 18 years ago, the vision was to create a corner gathering place where friends and neighbors could come together in a stylish but relaxing environment to enjoy fine food and drink.

It would have the same “everybody knows your name” kind of vibe as the famous watering hole on Cheers, but with a menu that elevates the concept of the American bar and grill. And while Little Ricky’s immediately established a reputation as a go-to spot for the best ribs in town, even in 2002, restaurant veteran O’Neil knew he wanted it to be more than that.

Today,with Chef Inda Cruz back in the kitchen after a two-month hiatus, Little Ricky’s is poised to compete with some of the most upscale eateries in the area (including O’Neil’s own Trifecta, located just down the street in Winnetka.) As the website proclaims,“we are much more than a rib joint.”

And oh, are they ever.

A recent Sunday visit was a culinary delight, with a tasting menu of some of Cruz’s original creations—many that began as daily specials that sold out so fast they were added to the permanent menu.

One of the most popular appetizers is Cruz’s Bang Bang Shrimp,an inventive juxtaposition of breaded flash fried shrimp served over roasted tomatoes and yellow teardrop peppers. The shrimps’ flavors shine on their own but a delicate line of Sweet Sriracha Chili Sauce adds the irresistible “bang.” 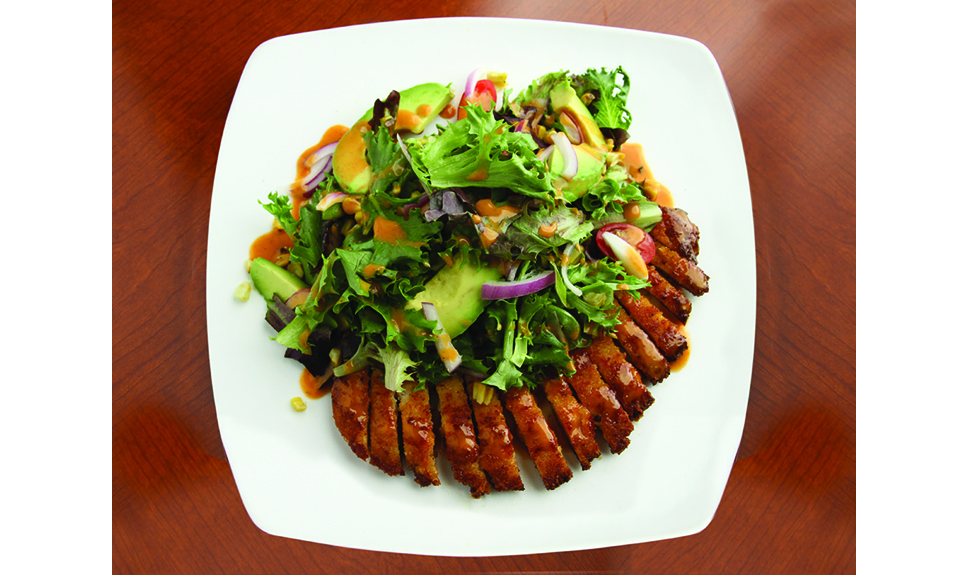 The salad selection is beyond impressive. Not to be content with the Cobb or Caesar (both still delicious with house-made dressings), there are literally a dozen salad options to choose from. Our favorites were the Chicken Milanese (Parmesan and panko crusted chicken over a bed of mixed greens,cherry tomatoes,red

By the time you get to the sandwiches and entrees, you might be tempted to skip straight to dessert (spoiler alert that Cruz’s chocolate homemade brownie is to die for). But don’t…there’s so much more to come (and noticethat we haven’t even tasted the fall-off-the-bone ribs.) “There is always something new,” says Cruz, a self- taught chef who got his start in the restaurant industry at O’Neils in Hubbard Woods 18 years ago.“I have come to know what people like and always put on new specials. We like to change items at least two times a week. And if they like it, I will add it to the menu.”

This creativity and passion for the next great recipe is what sets Little Ricky’s apart from other North Shore restaurants.

If that wasn’t enough,now it’s time for the main course. This is where the menu truly shines and transforms the dining experience to high-end bar and grill to five-star cuisine.

The BBQ Baby Back Ribs are there, along with a BBQ Half Chicken, but the entree choice is not so easy with some of Cruz’s other creations tempting the palate. Our two favorites were the Chicken Limone (sauteed chicken breast topped with a delicate,house-made lemon sauce) and the Chipotle Glazed Salmon (a pan-seared salmon fillet is gently coated in a sweet and tangy Chipotle glaze, paired with a sweet potato mash.)

Cruz says his personal favorite is the Skirt Steak, marinated to perfection, topped with pico de gallo, and served with the side of your choice. Our tasting seconded that recommendation, especially with Cruz’s special homemade mac and cheese on the side. There is also a Chicken Marsala dish on the menu that tops a sauteed chicken breast with a mushroom Marsala wine sauce. We didn’t get to taste it but with Cruz’s touch for sauces, have added it to the list for next time.

O’Neil says he is thrilled to have Cruz back at the helm as both head chef and now a partner in the business. “He’s incredibly talented,”says O’Neil,who like Cruz, worked his way up in the restaurant business—doing everything from washing dishes to bussing tables before opening his first restaurant,The Noodle,in Wilmette at age 25. “He was a line cook when he came to O’Neil’s and moved up from there.Everything he does is homemade with quality ingredients.He makes his own sauces and salad dressings. When he left, everyone could tell.” That culinary talent extends to the dessert menu,which as we mentioned earlier, includes his now-famous chocolate brownie, apple pie (served warm), and other sweet treats. And lest we forget that we are in an establishment of fine libations,an extensive beer,wine, and cocktail menu provides a wide variety of delectable options from start to finish.

We especially loved the Hummingbird, perfect for brunch (or to start any meal) with a combination of Mionetto Prosecco, St. Germain Elderflower liqueur, and soda water with a twist. O’Neil, who continues to run nearby Trifecta with wife Mary, says that despite all the changes in the neigh- borhood and in the restaurant industry,Little Ricky’s has become exactly what he dreamed of, all those years ago.

“We truly have something for everyone,” he says.“It’s fine dining but the environment is welcoming and casual. On any given Sunday, we might have someone eating here who is 5, and someone who is 95. And that’s the way it should be.”

Little Ricky’s is located at 540 Lincoln Avenue in Winnetka. For more information or to make a reservation, call 847-784-1444 or visit littlerickysrestaurant.com.