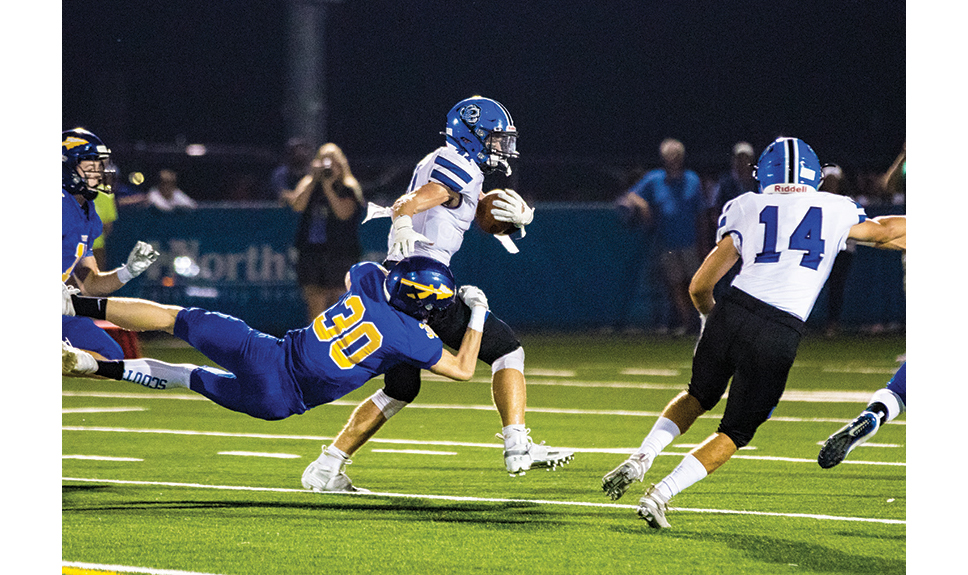 NOT SO FAST: Lake Forest High School sophomore cornerback Jake Milliman, making a stop in regular-season action against Lake Zurich High School this fall, made a crucial play in the Scouts’ 35- 10 defeat of Kaneland High School in a Class 6A state-playoff game on November 8. PHOTOGRAPHY BY MICHAEL GIANGIORGI

Leo Scheidler, in one swift motion, swept a patch of the home football turf with his right hand.

The Lake Forest High School sophomore cornerback executed the move moments before every Kaneland High School snap in a Class 6A second- round football playoff game on November 8.

“We all do that,” Scheidler said, referring to the Scouts’ defensive backs.“We do that now to make sure we’re focused and ready before each play.

“When we watched film of our [39-7] loss to Lake Zurich in September, we noticed we weren’t as ready as we needed to be.”

Scheidler was a disrupter all night against the Knights (8-3), particularly from spots in the Scouts’ end zone in the third quarter. The 6-foot, 145- pound varsity rookie broke up a pass on a fourth- and-11 play from LF’s 19-yard line on Kaneland’s first possession of the second half and then came down with an interception on a fourth-and-nine with 5:52 left in the frame.

The second intrusion protected a 21-3 lead. “My eyes got pretty big there,” Scheidler recalled. The Scouts’ other starting cornerback—sophomore Jake Milliman, a 6-2, 165-pounder—came up huge one minute before the start of the fourth quarter, catching up to Kaneland senior wide re- ceiver Max Gagne near the end of a lengthy pass play and knocking the ball loose.

The sequence, with the host school up 28-3, went from what appeared to be a certain Kaneland touchdown to Lake Forest’s ball, just like that.

Milliman’s extraction of the football from the clutches of a foe reminded many of ex-Chicago Bears cornerback Charles Tillman’s signature “Peanut Punch.”

Scheidler finished with seven tackles, two pass break-ups, and that interception, his second of the season. Coach Chuck Spagnoli’s sophomore cornerbacks have had to grow up in a hurry, and neither appears the least bit daunted in the heart of post-season action.

Hoskins was electric atop the turf at the school’s West Campus, sprinting north for 139 yards (on 16 carries) and passing for an additional 130. He rushed for the Scouts’ first two TDs, the first measuring one yard, the second covering 16 years. Both tallies occurred in the first quarter.

Significant chunks of Hoskins’ yardage on the ground followed sudden stops and ankle-breaking shifts. Junior running back Mac Uihlein, also a ferocious linebacker, took care of the straight-ahead stuff for the home team, entering an end zone after rushes of four, three and two yards in the second half.