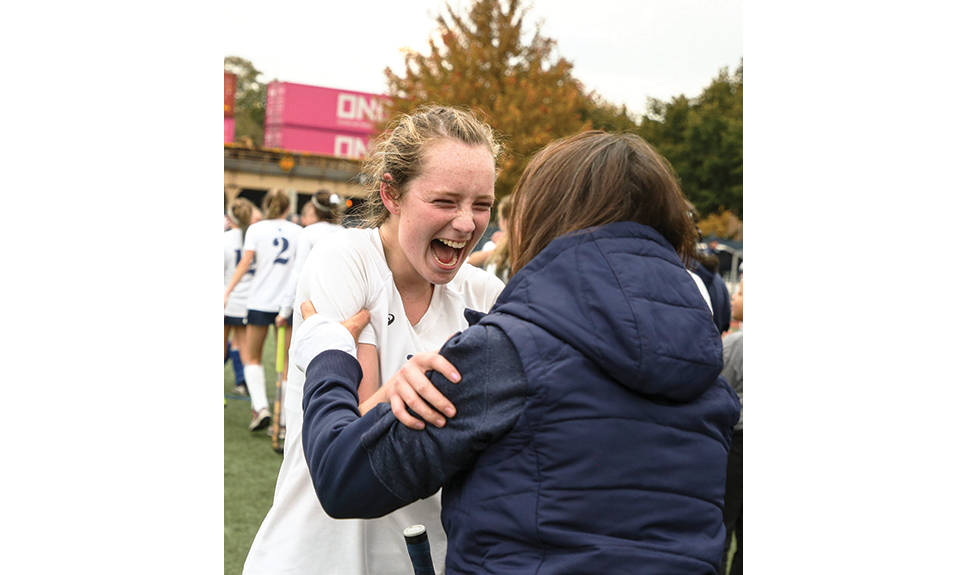 It had nothing to do with field hockey.

But it might have had something to do with New Trier High School’s field hockey team capturing another Illinois State Field Hockey Association state championship at Oak Park-River Forest High School on November 2.

“It loosened us up, brought us closer together,” New Trier senior and Denison (Ohio) University-bound midfielder Grace Harris recalls.

NT emerged victorious in that contest, behind a pair of goals from Harris.

“We’d been practicing since June,” says Harris, who started the season as a midfielder but ended up in the all-important “screen” slot, a hybrid midfielder/defender position. “Our practices were intense. We lifted weights.

“Everybody,” she adds, “wanted to win badly, wanted to be the best.”

New Trier (29-2-1), ranked No. 15 in the nation by MAX Field Hockey, scored the first two goals in the title game before Lake Forest’s Scouts barely beat the first-half buzzer to pare that lead in half.

“Before overtime I had a good feeling we’d win,” says New Trier coach Stephanie Nykaza, whose 2019 season was her 30th at the Winnetka school. “I felt pretty calm. We’d been pretty dominant all season, and it was one of my strongest teams.

McLaughlin, a University of Michigan recruit, was frighteningly good versus the Scouts and everybody else this fall. Her three goals in her final prep game last weekend upped her season total to an astounding 74, to go with her 16 assists.

“Kate,” Harris says, “is always hungry for the ball when she competes. Her movement is outstanding. On top of that, she has an out- standing shot—a wicked-hard shot.”

New Trier played LFHS three times before the state championship game, winning two of them. Their only in-state loss was a 2-1 setback at the sticks of LF’s visiting Scouts on October 11.

“Great season, but a tough way to lose,” says LFHS coach Cat Catanzaro, who lost eight starters to graduation after last season’s appearance in the state championship. “I do not think I could be any prouder than I am of this team.

“Our players fought hard and left everything on the field.”

Both sides were exhausted after 60 minutes of regulation, Nykaza remembers.

“Our first goal, in the 10-minute overtime, that was the turning point,” the coach adds. “I was exhausted at that point. Who wouldn’t have been? Our team felt a lot of pressure this season. It was a team of strong players, strong personalities.”

NOTABLE: New Trier senior midfielder/ forward Evelyn Lake intends to continue her field hockey career at Davidson College in North Carolina. … One day after scoring a goal in the state championship game, Harris received a congratulatory text message from her future coach at Denison, P.J. Soteriades. “Denison was the first school to reach out to me and recruit me my freshman year,” says Harris, who scored 13 goals and delivered 10 assists in her final season as a Trevian. “When I visited the school, everybody was nice and welcoming.” Denison was 14-3 before its scheduled North Coast Athletic Conference Tournament semifinal against DePauw on November 6. … Griffin’s team-high total of 32 assists in ’19 doubled the number of helpers tallied by the player who ranked second on the team in the category. … NT won its first 13 games this fall and finished the season on a six-game winning streak. NT allowed only a combined three goals in the final six games, with half of them coming in the final two games. … NT senior defender Francesca Caruso also was an impact player at the other end of the field, with her three goals and nine assists. Junior midfielder/defender Hillary Cox earned praise from Nykaza after the state championship game.