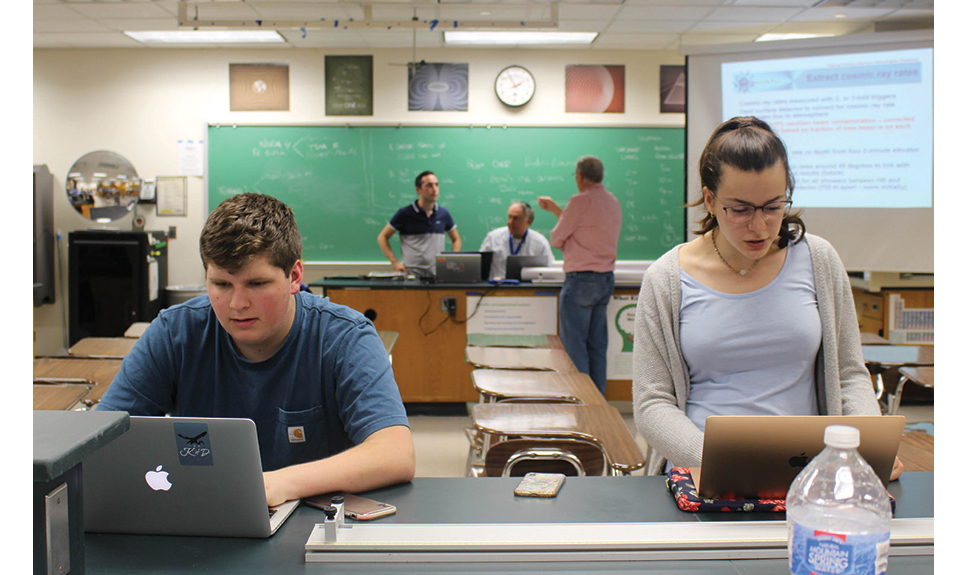 New Trier Township High School juniors Paul Graham and Ellie Winkler have spent the past year working with a team of 15 other Chicago-area high school students and teachers to propose, design, build, and analyze a unique high-energy physics experiment for the world-renowned Fermi National Accelerator Laboratory (Fermilab) in Batavia.

The students plan to submit an article about their findings for publication and present at the American Association of Physics Teachers Winter Meeting in Orlando in January—all before even entering their senior year of high school.

Graham and Winkler became interested in high-energy physics as freshmen after visiting New Trier’s Academic Assistance Center, an onsite tutoring center staffed mostly by retired teachers. In the spring of 2018, AAC tutor Nathan Unterman installed a detector for students to learn about cosmic rays, the high-energy protons and atomic nuclei that rain down on the earth from outside the solar system.

“I think that particle physics and astrophysics really appeal to me because looking at what makes up the universe on the tiny scale and on the really large scale, I just think that’s super fascinating and mysterious,” Winkler says. “I think as of right now, that’s what I want to do with my life.”

The duo continued participating in research and contributing to shared data as they transi- tioned to New Trier’s Winnetka Campus last fall, when they began running feasibility studies from the Tower Building on that campus. Soon after, Unterman introduced them to a group of Chicago-area students and teachers from Glenbrook North, Downers Grove South, Naperville Central, Ida Crown, Rochelle Zell, and the University of Illinois at Chicago.

By December, the students joined forces to further their studies and design an experiment for Fermilab. The teachers guided the students through the process of feasibility study—filing a formal proposal, execution, analysis, and report- ing, and the experiment was approved in March 2019.

The High School Students’ Muon Underground Shielding Experiment (MUSE) is an authentic cosmic ray experiment conducted in Fermilab’s MINOS neutrino tunnel, which houses detectors placed in the world’s most intense accelerator-generated neutrino beam 103 meters below ground and connects to the surface through an access shaft with an elevator. Neutrinos are subatomic particles with a much smaller mass than that of the other known elementary particles. Fermilab’s Main Injector Neutrino Oscillation

Search, or MINOS, was designed to study the phenomena of neutrino oscillations.

“Essentially what the students are proposing is to measure the cosmic ray shielding in the MINOS tunnel,” Unterman says. “Fermilab built an access shaft and that’s how they got everything down there, but that means you have this chunk not shielded. So, the question is, how much does the shaft contribute to cosmic rays that are picked up in the neutrino detector? As you move downstream from the shaft—does the number of cosmic rays change?”

For the MUSE experiment, the students measured the change in cosmic ray flux in the tunnel as they moved downstream from the elevator, anticipating the change in burden would affect the flux. To test this hypothesis, the students assembled three cosmic ray detectors: one to monitor cosmic rays above ground as a control, an identical detector to measure the rate underground, and a third to measure the muon background in the neutrino beam.

“What they have accomplished so far is nothing short o famazing,” New Trier Science Department Chair Jason English says.

While access to the tunnel was limited to students age 18 and older, the students still visited Fermilab almost every week in rotating groups, recording data from the surface of the tunnel as needed.

“This experiment is not just a good PR move for Fermilab, nor is it just a ‘gift’ of time and space for educational purposes,” English continues. “The experiment they are running could add to the body of scientific knowledge. In fact, even a null result would do so.”

While further analysis is needed to verify the group’s preliminary results, working at Fermilab has already heightened their confidence in pursuing high energy physics.

Graham says his experience reminded him of a legend from the Vatican in which a man saved a large group of people who were attempting to raise a giant obelisk with ropes from disaster because he yelled “water to the ropes” after notic-ing they were expanding in the midday heat— even though workers and observers had been threatened with the penalty of death for speaking. Instead of being punished, though, the man was rewarded for speaking his mind. A sculpture with the saying designed by Fermilab’s first director, Robert Wilson, sits outside Wilson Hall at the laboratory.

“The moral of the story is that everyone should be able to speak up and should not be punished for it,” Graham says. “No matter the rank, everyone has a right to comments. Everyone in high energy physics is even on a first name basis; this is a really cool idea, which taught me about how people should work together.”