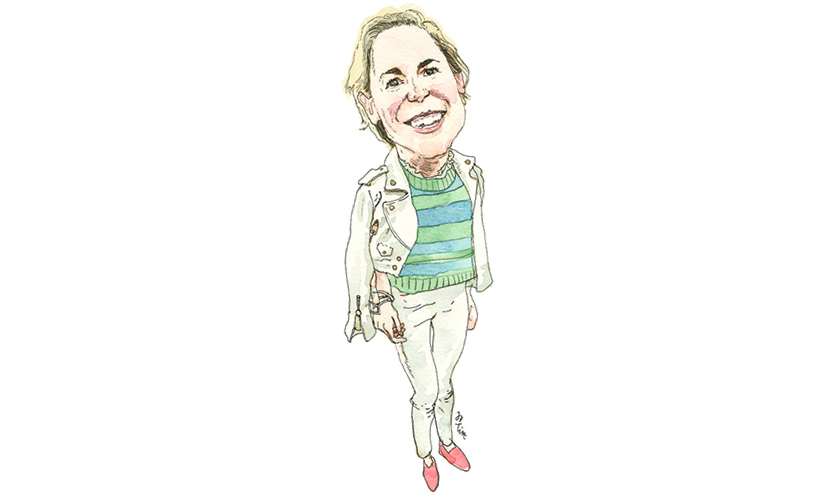 Abby Baine Dunn was in a hurry. Moving through the press of bodies crowded into New York City’s Times Square, she’d left the stress of high-level public relations back at the office, on her way to a weekend on Nantucket. She could already envision the beach, the waves, the faces of her friends. But stepping off the curb that perfect summer day, she didn’t see the shiny yellow Ducati racing toward her down the street.

“It hit me head on, full speed,” says Dunn. “When I woke up in intensive care, everything came to a full stop.”

Miraculously, there were no broken bones. But there was a lot of scarring, and rehab. “It was a life-altering experience,” says Dunn. “I truly realized how fragile life is and what’s really important. I still wanted the fast-paced work life I thrived on, but I knew it had to be near my family on the North Shore and the communities of people I grew up with and loved.”

So Dunn came back to the Chicago area, bringing with her the sharp skills in retail fashion and event marketing—plus a natural affinity for creating partnerships and relationship-building that has made her a force in the world of public relations here ever since.

Dunn’s unconventional path to PR started at Boston College, a Jesuit school that puts a lot of emphasis on philosophy, incorporating it into much of the curriculum. “I was an English and Philosophy major,” says Dunn, “I was always interested in social movements, different philosophies, and how people reacted to them—the general sense of movements in thought during different periods in history. And, I loved reading.”

An internship through Conde Nast’s Rover Program allowed Dunn to try jobs in different areas of the company—first advertising, then editorial, finally landing her in the offices of Allure magazine. There she was a publicist for founding Editor-in-Chief Linda Wells.

“Linda Wells was incredibly chic and sophisticated. But she was from St. Louis,” Dunn recalls, “So, she appreciated that I was from Chicago.”

But deeper than that affinity, Wells’ cerebral approach to her work made a lasting impression on Dunn.

“She was a great mentor. She was deeply thoughtful about being in fashion and beauty, with an intellectual approach to trends,” says Dunn. “‘Where does this trend come from?’ she’d ask.‘What does it say about our society? What does it say about women? What do women really want?’ So I’ve never thought of beauty as something that’s ‘fluffy.’ It can be quite meaningful.”

After three-and-one-half years with Allure, Dunn went to an agency in New York, working on cover shoots, gala, and high fashion events for Ballenciaga and Narciso Rodriquez. Then came the “fast-paced, incredibly intense PR consulting,” which Dunn says she loved, despite the challenge. Knowing she wanted to stay on this path in Chicago, Dunn held out for a job with Lannon Communications, then one of the most sophisticated boutique PR agencies in the city.

Waiting for an opening, she did marketing and PR for Oilily, the Scandinavian-based women and children’s clothing retailer. And when a job at Lannon finally opened up, Dunn went back to doing boutique openings, branding work, and PR, including a stint as the fashion director for Active Endeavors. Then came her position as vice president at Blast Marketing & PR, where she directed more than 20 accounts and was able to work with the restaurant powers that earned Chicago its place as one of the world’s key culinary capitals.

Through it all, Dunn’s connections to the North Shore never waned. Abby and her husband Danny Dunn bought a house in Wilmette. Abby’s grandmother, Mary Ann Ford, owned one of the first homes ever built on Sunset Road. Her mom, Sarah Baine, one of nine children raised in that house, went to the School of Saints Faith, Hope and Charity (SFHC) in Winnetka—as did Abby’s brother, her husband Danny, and now, their three children: Piper, Scout, and Teddy.

“We have always had a base here,” says Dunn. “Although in childhood I spent time in Boston and in London for my father’s work. I went to high school at New Trier, which was one of the highlights of my entire life. I was in Girls Club. I played field hockey. I’m still very close with all of my friends from New Trier. And my husband went to Loyola Academy, so this area has always been a touchstone for us.”

Today, as co-president of the Parent Teacher Organization at SFHC, mom, and head of the eponymous independent PR firm she launched in Chicago four years ago, Dunn’s roles on the North Shore continue to evolve. Dunn’s client base steadily grows, including Protein Bar & Kitchen, Ann Taylor, plus many on the North Shore. Dunn also selects four charities each year, for which she does pro bono work.

“There is a lot of multitasking,” Dunn admits, describing a day that starts at 5:20 with workouts at Shred415 (treadmill), SALT (barre), or SoulCycle (cycling). That may then be followed by mass, if one of her kids is participating, then client calls to and from client meetings downtown.

“But I share this identity with a lot of women who are juggling a million things, contributing both to the workplace and to their schools and home environment,” she adds. “And I have been very fortunate to be surrounded by a network of women who encourage one another to do what it takes to make it happen. To take risks.”

Throughout it all, Dunn says, “Relationships are everything, both in my community life and in my career. There was a time when public relations meant you would take a brand or a story and pitch it to traditional media outlets. But now it’s much more than that. You have to be a facilitator of relationships. Malcolm Gladwell talks about being a ‘connector,’ and that is my favorite thing to do. Connecting people with similar mindsets, or, fitting someone who has a need with the person who has the wherewithal to fulfill that need—it’s very gratifying.”

For more about Abby, visit abbydunnpr.com