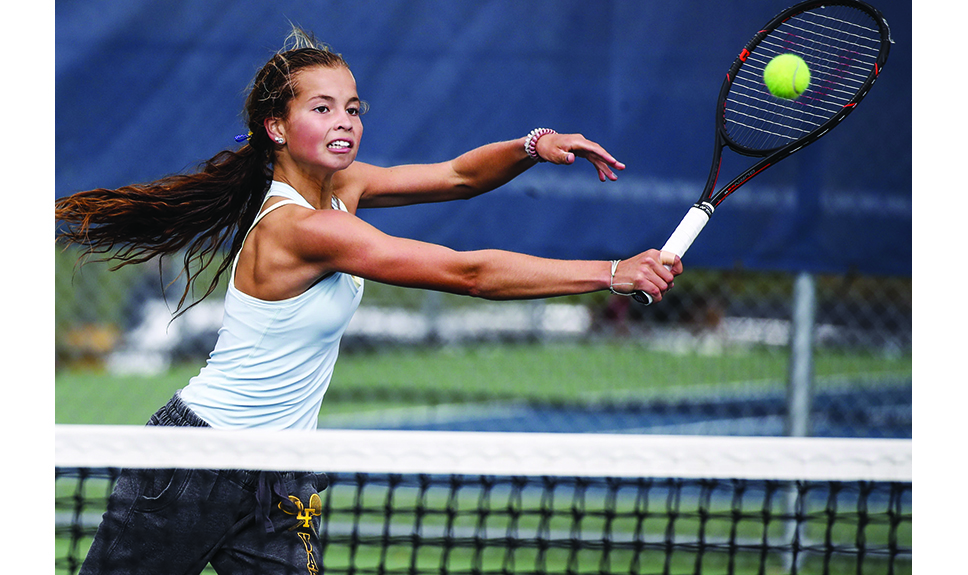 Meet officials place chairs courtside for only the big matches each year at the Class 2A girls’ tennis state tournament.

Players use them to rest during changeovers. Most players, that is. Lake Forest High School junior ace KileyRabjohns ignored her seat in the championship singles final on October 26, preferring instead to stand while receiving coaching tips and words of encouragement from Scouts coach Denise Murphy.

“Sitting, for Kiley, would be like pausing,” Murphy explained. “That’s the last thing she wants to do in a match like that. She wants to keep playing, keep moving.

“She got to move a little bit while standing during the breaks in action, and it also helped Kiley maintain her focus,” the coach added.

The state singles title was her second straight. And second in program history.
It also served as the most significant highlight of Lake Forest High School’s team-championship effort. Murphy’s racket-wielding standouts netted 39 points at the three-day event, ahead of runner-up Hinsdale Central (33) and third-place New Trier (26).

Murphy has guided the program to four state titles since 2010. The Scouts’ first two state championships occurred in 2001 and ’02, under the direction of coach Robert Wagemann.

Rabjohns—fifth at state in singles as a fresh- man, in 2017—trailed Nevenhoven for most of the first set last weekend. Down 5-4, she broke Nevenhoven’s serve with a crisp forehand volley winner and then won eight of the last 10 games to seal the team title and become the first back-to-back state singles champ since Elizabeth Epstein of Francis W. Parker School won her second championship in 2008.

“Kiley was locked in and played smart tennis,” Murphy said of her star’s approach in the pivotal 10th game of the first set. “She mixes her shots up so beautifully. Her slices? She knows exactly when to use those, offensively and defensively, and she’s solid both physically and mentally.

“Her footwork, the way she hustles, the way she competes, how important the team is to her—she’s a coach’s dream.”

And the sister of another talented Scout. Freshman Autumn Rabjohns, a 5-8 seed in singles, capped her fantastic fall season with a fifth-place showing (sound familiar?) at state, downing 3-4 seed Jacquelyne Qi of Naperville Central 6-2, 6-2 in her final match.

“The sisters’ bond is a special one,” Murphy said. “They’re incredibly competitive; it’s back and forth with them. They support each other and love each other. It was great all season, the two of them together, the two of them playing at a high level for their school.”

Murphy paired seniors Nika Belova and Salma Alsikafi and watched them generate 10 team points en route to a fourth-place showing in doubles. Seeded 3-4, the combo dropped only a combined 17 games in their first four tests at state.

LFHS assistant Corky Leighton coached the tandem during the changeovers in the match for third place.

“They weren’t afraid to be aggressive,” Leighton said. “They picked off shots, read their opponents well. They gave each other information, played defensively when necessary, and they communicated well with me.”

The Brown University-bound netter finished in third place in Class 2A singles, becoming only the sixth New Trier player in program history to notch at least one top-three performance in both singles and doubles at state; Benedetto and current Harvard University sophomore Amia Ross took third in doubles at the 2017 state meet.

“I’m proud of Ali; nice finish to an outstanding career in our program,” said NT coach Jerry Morse-Karzen, whose state contingent of two singles players and two doubles teams amassed 26 points and returned to Winnetka with a third-place trophy.

Benedetto, seeded 3-4, won four matches in straight sets before falling 6-4, 6-4 to No. 2 seed Belen Nevenhoven of Rockford Auburn in a semifinal October 25. The aggressive, all- court athlete then solved Hinsdale Central’s Nicole Hu 6-1, 6-4 in the match for third place October 26.

“Exciting weekend,” Benedetto said, adding she can’t wait to strike shots for Brown’s Bears in Ivy League matches. “What was most exciting was how well our team did. I enjoyed experiencing the team aspect of high school tennis.”

Ashtin Hara and Monika Glueck have hit the books at New Trier for only a handful of semesters. Hara is sophomore, Glueck a freshman. But they battled like seasoned veterans on the courts at state, finishing in sixth place in doubles after winning five of seven matches.

HPHS finished in a tie for 10th place, with 10 points, in the team standings.