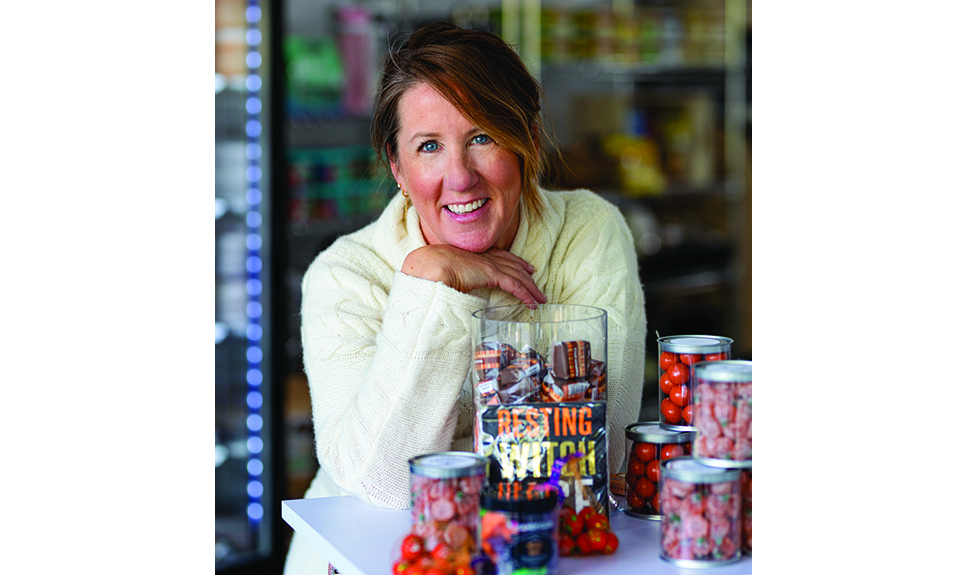 It’s about an hour before opening time, and with the morning sun lighting up the soft palette of the merchandise, six-week-old Shack looks every bit the Midwest beach-town baby that Sullivan wanted to create next door to Share.

“We live in a beach town,” says O’Sullivan. “In fact, the North Shore is a string of towns with gorgeous beaches— from Evanston on the south to Lake Bluff on the North. But unlike the East Coast where I grew up, where every beach town had little shops with their own merchandise that celebrated that special, local feel, the North Shore didn’t have that.”

Riffing on a concept both charming and original, O’Sullivan carefully curates merchandise at Shack that changes frequently with “pop-up” themes. This gives the term “beach town” a North Shore flair that works throughout the year, in hot weather and cold. 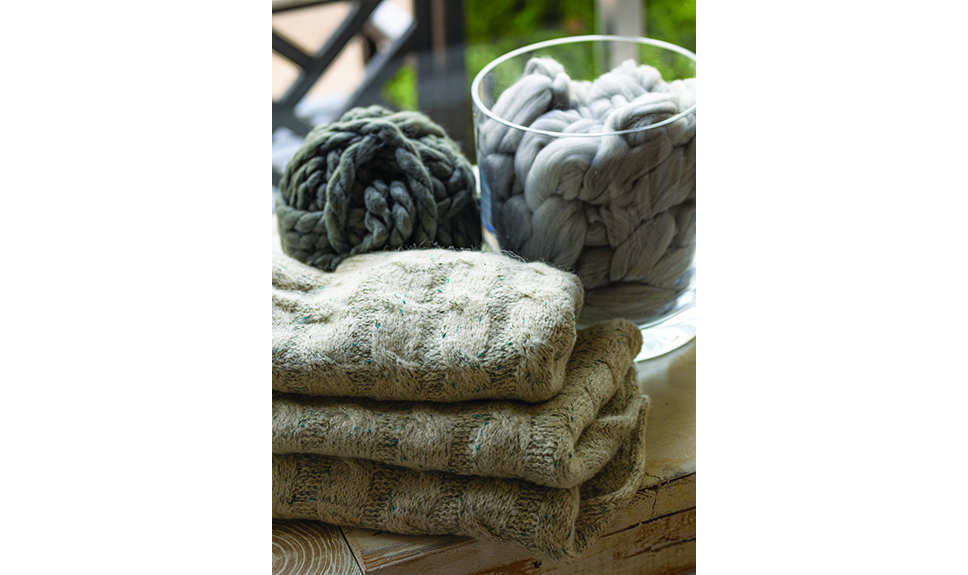 O’Sullivan calls her approach at Shack a “modern general store” with a mix of merchandise that runs the gamut from home décor and fun wearables to hostess gifts and jewelry. It even includes an assortment of grab-and-go soup; salad and sandwich items; plus, jeni’s ice-creams and cold-pressed juice drinks from Harvest Juicery in Chicago. Since the Shack opened in September, late summer displays have given way to a “Sweater Weather” theme of cool-weather coziness.There are chunky sweaters, mittens, blankets, and pom- topped hats knit in cloud-soft bulky yarns, plus pumpkin spice flavored treats.

And in the next few weeks, the shop will morph again—with holiday-themed displays of home decor, jewelry, gift options and wardrobe pieces. 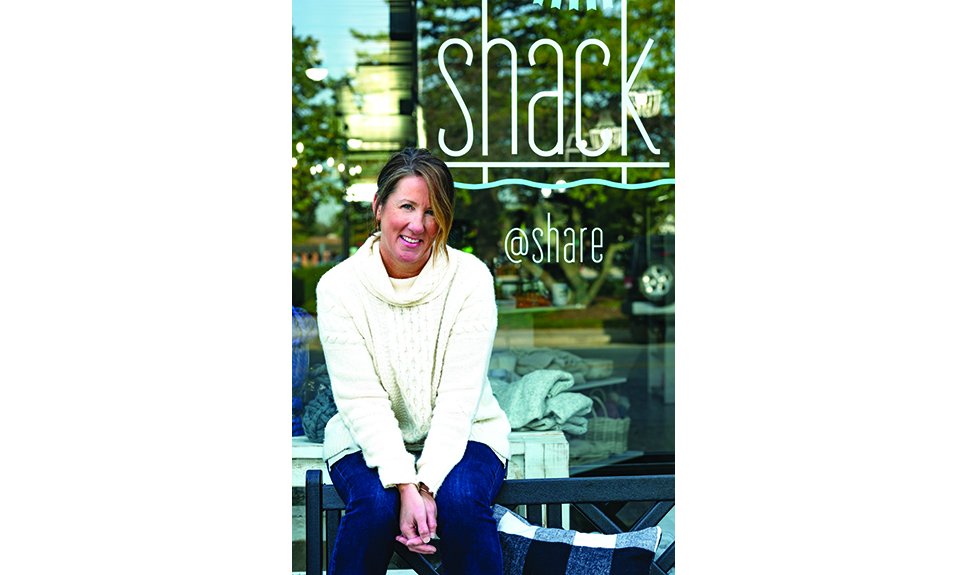 One feature at Shack that stays year ‘round is a section devoted to O’Sullivan’s 600NS line of North Shore coastal-inspired goods(600 are the three shared numbers in North Shore zip codes). That line includes T-shirts, sweatshirts, baseball hats, and pouches. Other items feature one of eight different beach token-styled logos, representing each of the North Shore’s beach towns. Shack donates one dollar for every 600NS item sold to Chicago Surfrider Foundation.

But even the 600NS merchandise evolves, as O’Sullivan adds new items to the offerings.

“We introduce a few new things every few months,” she says. “We have a wool beanie and a polar fleece zip coming next.”

Designing clothing, store displays, and curating an ever-changing assortment of offerings is something O’Sullivan has loved doing since she was a child. 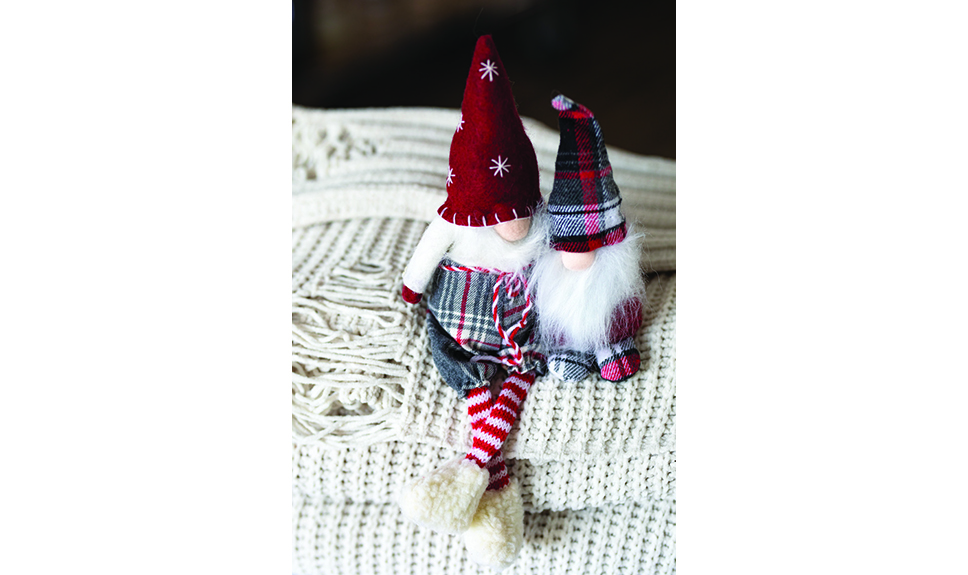 O’Sullivan also loved the fashion industry. Growing up in Stanton, New Jersey, an hour away from New York City, Karen can remember how much she enjoyed going to the costume exhibits at the Metropolitan Museum of Art.

“I always knew fashion was what I wanted to explore. It’s so expressive and I find it very transformative,” she says. O’Sullivan attended the Fashion Institute of Technology in New York City, which led to editing and styling jobs at fashion and lifestyle magazines, including Woman’s Day. Relocating to Chicago with her husband more than 20 years ago, O’Sullivan left an advertising career to raise her three daughters and launched her first clothing line.

Called “Grosgrain,” each piece in the line had “a little shot of grosgrain ribbon in it,” O’Sullivan recalls. “That line was really my first pop-up—my way of having a creative outlet while I was raising the first two of my three girls.”

Combining the fashion styling she’d done for magazines in New York with her long-term love of retail, O’Sullivan launched her Share boutique four years ago.

“Essentially, now when I go and buy for my stores, I think like an editor,” she says. “I decide what my display stories are going to be before I go to market. I build each story knowing exactly what that vignette is going to look like when it hits the floor.”

“And the business grew exponentially,” says O’Sullivan. “I think a big part of the success is that I stick with certain rules for what I bring into both Share and Shack. I don’t buy a lot of anything so the turnover is constant. I rarely reorder anything. And I change the displays often.”

But the biggest plus?

“I keep the price point accessible,” O’Sullivan concludes. “As a buyer, it’s much easier to find beautiful things that are expensive. But I’ve made it my priority to find that same look and feel at an affordable price. I think that’s what people have come to really love about the stores.”