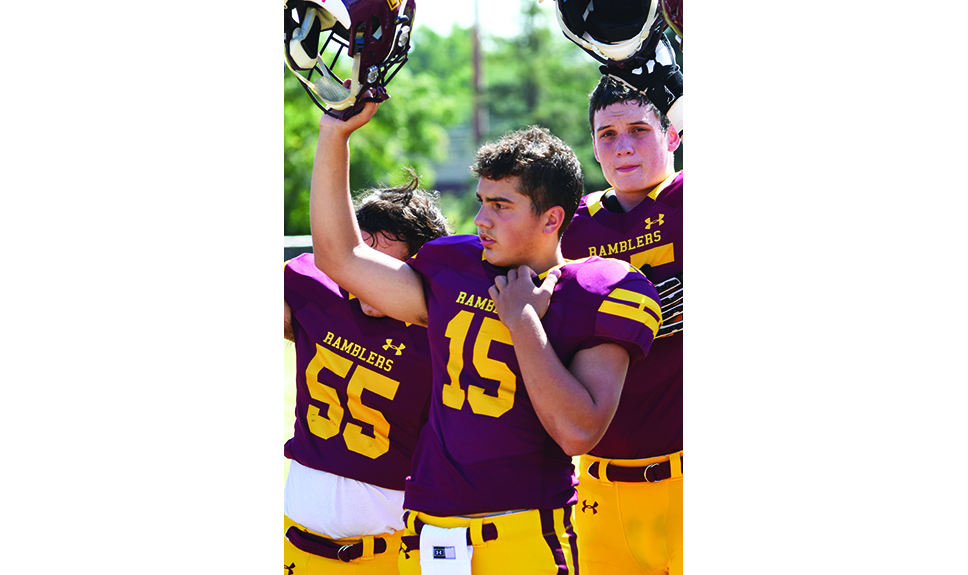 HATS OFF TO YOU, NATE: Loyola Academy junior kicker/punter Nate Van Zelst (No. 15) has nailed 48- and 49-yard field goals for the 5-2 Ramblers this fall. The Glenview resident, who’s ranked No. 21 nationally among kickers in the Class of 2021 by Kohl’s Professional Camps, went 14-for-17 in field goals for Loyola Academy’s Class 8A state championship team last fall.PHOTOGRAPHY BY BRAD HOKIN/GLORYDAYSPHOTOS.COM.

A kicker trots out to the field. He then prepares to boot a field goal.

That’s when Van Zelst, a junior kicker/punter at Loyola Academy, starts to feel uneasy. He’s pulling for the kicker to make the field goal. Pulling hard.

No matter the team for which the kicker plays.

“I get more nervous watching other kickers than I do when I’m about to attempt a field goal in a game,” says the 6-foot, 185-pound Van Zelst, who has connected from 49 and 48 yards this fall, the latter field goal coming in Loyola Academy’s 46-14 defeat of visiting Benet Academy on October 12.

“I want them to make every kick.”

And you want Nate Van Zelst at the controls in a cockpit, as the plane you’re in suddenly jerks to the left, veers to the right, and then descends rapidly.

“Nate’s not only talented; he also has the characteristics, the personality, the demeanor you want in a kicker,” Loyola Academy football coach John Holecek says. “He’s so steady, calm, and cool.

“It’s like he’s a 30-year-old,” the former Uni- versity of Illinois and NFL linebacker adds.

Van Zelst met Cleveland Browns rookie kicker Austin Seibert several years ago at a Kohl’s Camp when Seibert, a kicker/punter in college, was on his way to making 63 of 79 career field-goal attempts for the University of Oklahoma.

“It was amazing for me, watching him, noticing his techniques, talking with him,” says Van Zelst, 3-for-4 in field goals through seven games this season. “What separates the men from the boys in kicking is the mental side, because kicking is 70 percent mental, in my opinion. You have to be strong mentally to get anywhere as a kicker.”

Van Zelst was a wide receiver for the 5th grade football team at Our Lady of Perpetual Help Catholic School in Glenview when the squad needed a kicker. Van Zelst was game to give kicking a try. But it wasn’t until his 7th grade season that Van Zelst realized, with hard work, the strength and accuracy of his right leg could lead to a promising future in the sport.

The children’s parents, swimmers Dave and Cindy, met as students at Purdue.

Nate Van Zelst’s varsity football career at Loyola Academy began unusually—and wonderfully. Weeks removed from the end of his season as the kicker for the Ramblers’ freshman team, Van Zelst was told to meet with Holecek, whose varsity had secured a Class 8A semifinal playoff against Edwardsville at the time.

“Coach Holecek,” Van Zelst recounts, “asked me, ‘Would you like to play on the varsity?’” The Rambler rookie didn’t say, “No.”

Van Zelst split the uprights for a field goal in Loyola Academy’s 17-10 defeat of Edwardsville in his varsity debut. The Ramblers fell to Lincoln-Way East’s Griffins in the state championship game but captured the program’s third state championship last fall in Champaign, where Van Zelst tallied seven points—on field goals of 24 and 37 yards, plus an extra point—in a 17-10 triumph over Brother Rice.

“My favorite part of kicking is seeing the reaction of my teammates when I make a field goal or do something else that helps the team,” says Van Zelst, a team-first teammate who praises senior long snapper Christo Kelly and senior holder John Grogan every chance he gets.

He produced an example of “something else” in last weekend’s game against Benet Academy, which entered the game with a 6-0 record. On a 4th-and-8, Van Zelst clutched the long snap, faked a punt, and raced toward the Ramblers’ sideline to pick up a first down.

Thrilled, loud teammates swarmed Van Zelst to celebrate the big play, some patting his helmet and shoulder pads, others embracing the unassuming standout.

The young man sticks out in classrooms, too. The Kohl’s Professional Camps website reports Van Zelst earned an ACT score of 31. His grade rate, according to the site: 94.36.

“Homework and football,” Van Zelst says of his current priorities, in that order. “I’m enjoy- ing my economics class. Miss [Nicole] Roman makes it fun, interesting. And there’s something different every day.”