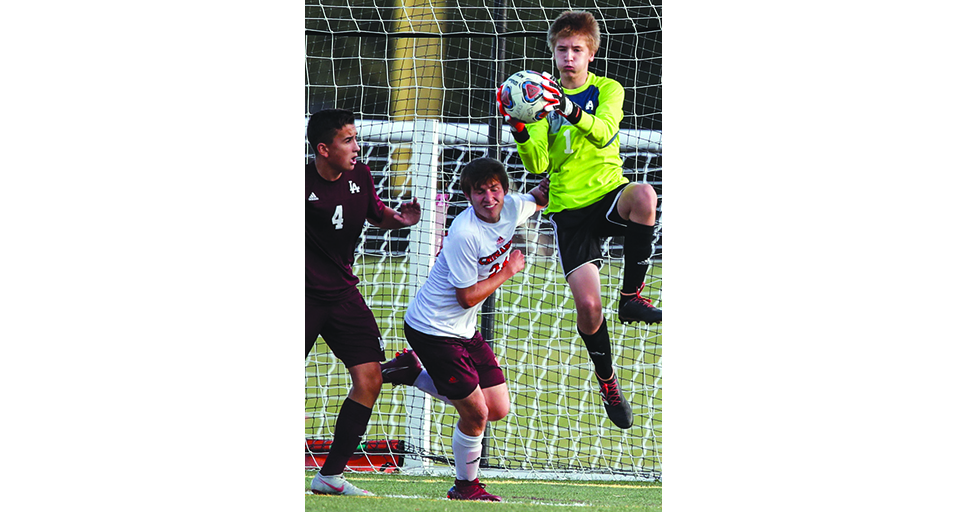 A-1 SAVE: Loyola Academy sophomore goalkeeper Alex Ainsworth, seen here in action last fall, rises and shines during a save. Teammate Mario Hrvojevic (No. 4) scored a goal and assisted on another in Loyola Academy’s 5-0, homecoming defeat of Mansueto High School on October 5. PHOTOGRAPHY BY JOEL LERNER

Austin Agyemang’s right arm shot straight up. The Loyola Academy senior soccer player, standing between teammates Andrew Hoepfner and Alex Ainsworth, had just heard a question— ”Who’s the best dancer among the three of you?”—following the Ramblers’ 5-0, homecoming rout of Mansueto High School on October5. “You’re looking at him,” Agyemang, a talented forward, said with a wide smile as he lowered his right arm.

His flanked mates agreed with the assessment—quickly and wholeheartedly.

“Austin is energetic on the dance floor,” Hoepfner, a co-captain, said.

“He’s a creative dancer,” Ainsworth, only a sophomore and already a second-year net minder with the parent club, said after posting another clean sheet, this time against a replacement opponent at Loyola Academy’s Munz campus in Glenview.

The creative dancer had fittingly created oodles of scoring chances—six, maybe seven—for himself against Mansueto’s Leopards, who served as the Ramblers’ fill-in foe when Solorio Academy’s Sun Warriors had to back out of the match to compete in a Chicago Public Schools boys’ soccer playoff.

Bad luck kept Agyemang from scoring on homecoming weekend. So did some exceptional saves from Mansueto sophomore backup keeper Rudy Flores, who entered the contest for injured starter Alejandro Rivera in the 18th minute.

Flores had been a JV goalie until his impressive showing against the Ramblers’ varsity side on a chilly, blustery morning.

Loyola Academy’s start was too hot for Mansueto, a charter school located in Chicago’s Brighton Park neighborhood. Coach Baer Fisher’s boys of autumn struck for four goals in the first 15 minutes of the 80-minute meeting.

Hrvojevic upped the advantage to 3-0 without the aid of a helper two minutes later, and junior midfielder/forward Tommy Zipprich, the club’s other co-captain, notched the final goal of the first half off an assist from Hoepfner in the 15th minute.

“Our ball movement in the midfield,” Agyemang said, referring to what makes Fisher’s young squad—no fewer than seven sophomores made his varsity—a consistently dangerous one.

Agyemang (pronounced Adge-gee-mon), a graduate of St. Mary of the Lake Catholic School in Chicago, essentially dominated the action at Mansueto’s end of the pitch in the second half, flashing his speed and countless foot skills to earn scoring opportunity after scoring opportunity.

Too much leg resulted in a too-high, too-hard shot attempt, and Flores thwarted a pair of point-blank missiles from Agyemang in a five-minute span.

Agyemang couldn’t hide hints of frustration during match action. But his positivity prevailed afterward as he broke down the Mansueto-Loyola Academy encounter.

“We can create chances; you saw that out there,” Agyemang said. “We’re good at that.

“We just have to finish our chances better.”

The Ramblers did finish well once in the second 40 minutes, getting a goal from junior midfielder Colin Redmond off an assist from junior forward Dylan Gripman.

Agyemang and Loyola Academy sophomore midfielder/forward Bryan Ramsay—a product of Deer Path Middle School in Lake Forest— nearly connected for a goal after halftime. Ramsay collected a feed from Agyemang, but his shot flew a tad wide. The active and alert Ramsay found himself in the middle of several other promising rushes in front of Flores before Flores became the second Mansueto keeper to exit with an injury. The Leopard returned to his sideline for treatment from a Loyola Academy athletic trainer.

The other good news for the Loyola Academy boys’ soccer squad, in addition to gaining its 10th victory of the season last weekend?

Notable: The Loyola Academy boys’ soccer team’s record in the Chicago Catholic League Blue Division stood at 1-2-1 after loss to Brother Rice on October 3. That hard-fought match went to double overtime and a PK session, with Rice’s Crusaders emerging with a 3-2 triumph (5-3 on penalty kicks) over the reigning CCL Blue cham- pions. … Loyola Academy had recorded six shutouts through its 5-0 defeat of visiting Mansueto High School on October 5. The Ramblers’ third and fourth shutouts in 2019 occurred on their East Coast trip in mid-September, when they blanked both Deerfield (Mass.) Academy and Suffield (Conn.) Academy 2-0 in a three-day stretch. Loyola Academy coach Baer Fisher hopes to schedule a similar get-away next season and beyond. … From September 7-19, during which Loyola Academy went 5-0-1, the Ramblers outscored their opponents by a combined 19-2. … Loyola Academy finished with an overall mark of 15-2-4 last fall, reaching a Class 3A regional final on the home pitch. Among the Ramblers’ top players in 2018 were then-seniors Collin Leider and David Gripman. The latter, a forward, is a member of the DePaul University men’s soccer team.