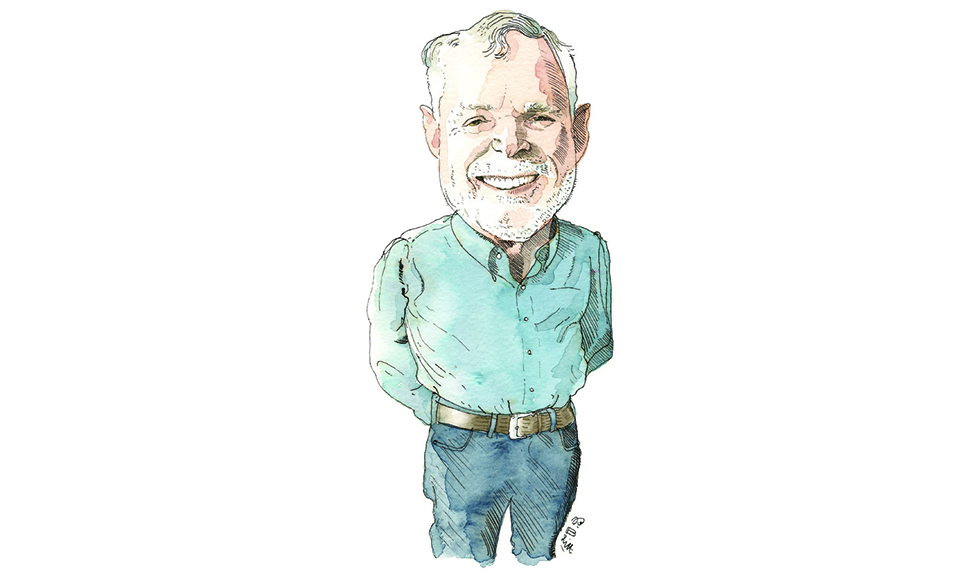 Only kids and the milk man knocked on the back door at the Schuler house in Whitefish Bay, Wisconsin.

“My grades, in my first semester in high school? Disastrous,” Schuler, 79, recalls. “Months earlier, it was recommended that I repeat the 8th grade. But my mom met with the principal at Cumberland School and told him I had agreed to study harder.”

Humke and Jack and Jack’s parents sat in the living room. The teacher informed them that only eight freshmen in Wiscon- sin had scored a perfect score on the state-mandated math test.

One happened to attend Whitefish Bay High School—the one who had opened the door for Mr. Humke on that day.

“Mr. Humke,” Schuler says, looked at me and said, ‘If you put your mind to it, you’ll be able to go to any college in the country.’ What he said hit me like a laser.”

Young Jack had long one-way talks with Freckles, the family dog, later that day and made life-changing decisions before turning into a laser-focused student in high school.

He then majored in engineering at Tufts and earned a graduate degree at Stanford University. He was a highly successful employee at Texas Instruments and Abbott Laboratories, where he was President and COO in the mid ’80s and served on the Icos Corporation board of directors with Bill Gates.

But the acme of Schuler’s professional career—as well as the endeavor that has been most rewarding to him—
is the Schuler Scholar Program he launched with his daughter, Tanya Schuler Sharman, in 2001.

The Schuler Scholar staff has steered more than 1,200 teens—mostly first-generation African-American and Hispanic college students—to Ivy League schools and other highly competitive institutions through the program’s offerings of free resources for four years.

“We identify candidates in the 8th grade who will attend 15 struggling high schools in Chicago,” says Schuler, who lives with his wife, Renate, at Crab Tree Farm in Lake Bluff. “We take all of them to the wilderness in northern Wisconsin and throw all kinds of obstacles at them. Later, in between their freshman and sophomore years in high school, we take them to fine restaurants and to the opera and expose them to different opportunities. We also take them to campuses across the country and let them look at where they could be and study someday. The point we’re making is, there’s a payoff to working hard in high school because high-quality education is transformative.

“So much of what we do,” he adds, “begins with helping Schuler Scholars commit to the effort to get accepted into top colleges. From there you want them to believe that it will happen.”

What will happen on November 1?

“Bill Gates,” Schuler recounts, “gave me two valuable pieces of advice. One, stay close to home. Two, instead of financing nonprofits, create something that will benefit others.”

About seven years ago, a Schuler Scholar showed up at the Schuler Scholar Program office in Lake Forest to thank Jack Schuler. She had just been accepted into medical school after graduating at the top of her class at Brown University.

“I didn’t deserve to be thanked; that young woman had overcome so many obstacles on her own to reach that point in her life,” says Schuler, a father of three and a grandfather of eight. “I was thrilled for her. I asked her, ‘How did you do it? What kept you going?’ She told me, ‘As soon as I got off the trail at your leadership camp in Wisconsin, I felt I could do anything.’ She was 14.”

The engaging Schuler smiles. The pride he has for the scholar still shows.

“If someone had told me I’d be a part of something that would help a student at a struggling city school become a first- generation student at Princeton or at Dartmouth or at any prestigious school, I would have told that someone, ‘No way,’” Schuler says. “But our staff is a terrific one, very passionate. We’re centered on people. We’re centered on our scholars.”

The Local Legends event will be held at 7 p.m. on November 1 at the History Center of Lake Forest-Lake Bluff ’s Hunter Family Education Hall, 509 E. Deerpath Road, in Lake Forest.

Honoree Jack Schuler will be interviewed by award-winning journalist Larry Potash. Local Legends is a fundraiser for the History Center.

Proceeds from this event help the center continue its mission of connecting people and inspiring curiosity by exhibiting, col- lecting, sharing, and celebrating history. For more information and to purchase a ticket ($90), visit lflbhistory.org.