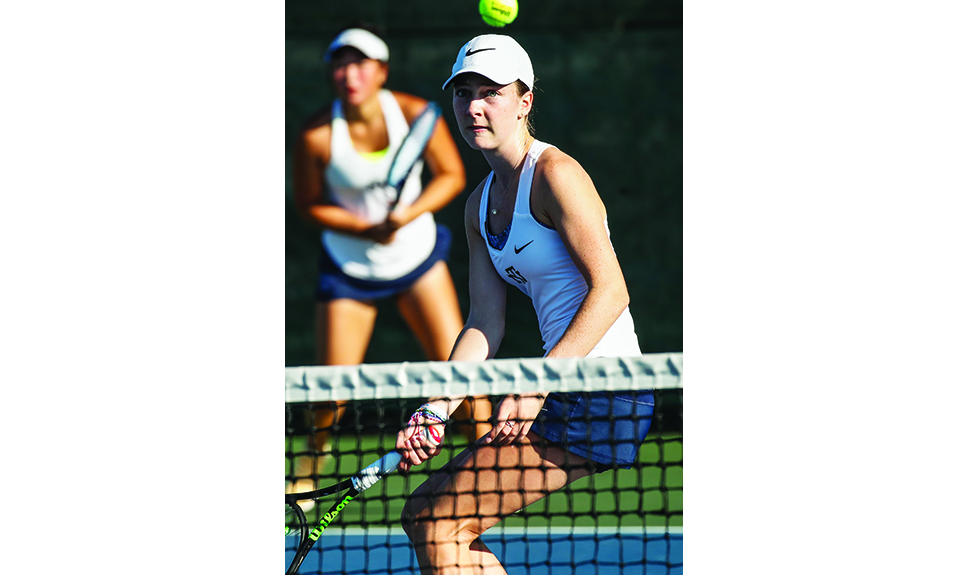 ‘BEN’ THERE, VOLLEYED THAT: New Trier High School senior standout Ali Benedetto, seen here in action against Highland Park High School last fall, has won a combined 11 matches at state in three seasons. Half of the third-place doubles team (with NT graduate Amia Ross) at the state tournament in 2017, she plans to strike winners at Brown University. PHOTOGRAPHY BY JOEL LERNER

New Trier High School senior Ali Benedetto has a good shot at becoming the sixth to do so later this month.

Brown University-bound Benedetto teamed up with current Harvard University sophomore Amia Ross to take third place in doubles at the Class 2A state tournament in 2017. Last year, as a third-year varsity member, she won five of six singles matches at state, reaching the semi- final round of the back draw.

Her only losses on the No. 1 singles court this fall have been to reigning Class 2A state singles champion Kiley Rabjohns, a junior at Lake Forest High School.

Benedetto’s most significant win to date in the 2019 season was a 6-3, 4-6, 10-4 (super tiebreaker) defeat of Whitney Young High School senior Darinka Stepan.

The 5-foot-10 Trevian found time in between her school and tennis commitments to discuss her startling growth spurt; defeating one of her closest friends; where she’d like to scuba dive next; and Roger Federer, among other topics.

The North Shore Weekend: What was working for you during your recent match with Darinka Stepan?

Ali Benedetto: “It was important for me to play an all-court game against her. I went to the net a lot, hit slices, hit top-spin shots. I felt I had to mix it up often in order to have a good chance at beating her. She’s one of my best friends; we play doubles together in USTA tournaments in the offseason. I gave her a big hug afterward.”

TNSW: Your game today, compared to your game during your first couple of years in New Trier’s program?

AB: “I was small, so small, my freshman year. I was maybe 5-foot-3. I had stopped playing soccer at an early age because I was getting beat up in games. Growing like I did, in the last year or so, has helped my serve considerably, and I’ve been focusing on my overall consistency. It has taken a while, developing the tools I need to use in matches, but now it’s all coming to- gether. It’s nice being able to use power to put shots away early in points. But I’m also willing to grind points out if that’s what I need to do against an opponent.”

AB: “I went on my official visit and loved it there, right away. I loved the campus, the location, the coaching staff, and the team.”

TNSW: Other schools you considered?

AB: “Dartmouth, Notre Dame, Wake Forest, and some others.”

TNSW: The one word that best describes New Trier coach Jerry Morse-Karzen? And why?

TNSW: What do you remember about the day you found out you’d made the varsity tennis team as a freshman in 2016?

AB: “Jerry told the players individually in the shack at the A.C. Nielsen Tennis Center. I was so excited.”

AB: “Tina Pisnik, who works at College Park in Bannockburn. She played professional doubles with Kim Clijsters, and her highest world singles ranking was 29th. I started taking lessons from her when I was in 7th grade. She’s definitely tough, but she’s fun, too. She’s got that great European work ethic.”

TNSW: What do you enjoy doing in your free time?

AB: “Traveling, skiing, hiking, anything outdoors. But what I find most enjoyable is scuba diving. My dream is to scuba dive in the Great Barrier Reef in Australia one day. My dad, John, did that and showed me pictures of his experience.”

TNSW: The athletic backgrounds of your parents?

AB: “My dad grew up in Olympia Fields and played golf. My mom, Lisa, competed in gymnastics in high school. She has played paddle.”

TNSW: Your favorite male tennis professional? And why?

AB: “Roger Federer, because he’s a legend. He always enjoys playing, loves the game. It comes naturally to him.”

TNSW: Your outlook, in general?

AB: “I always try to stay positive, no matter what I’m doing, and I give everything I have all the time. Success comes with hard work, right?”