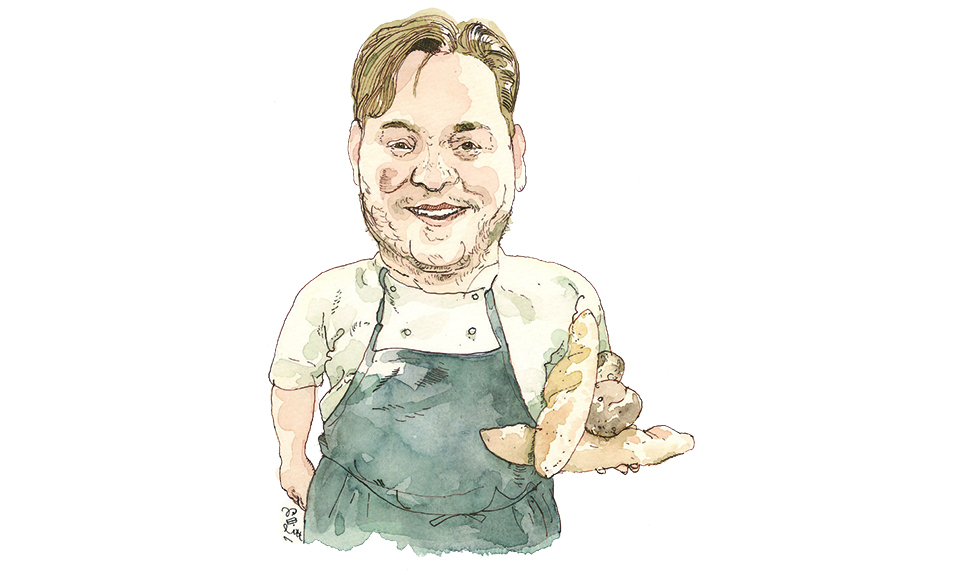 There was a time when the stretch of Sheridan Road just round the bend from Evanston heading South to Loyola University, was home to luxury residential hotels that boasted concierge service and elegant dining rooms. The Rogers Park Hotel and Sheridan Beach Hotel, both built in the early 1920s, were top-of-the-line for fine dining. But those options faded with the Roaring Twenties, and for decades, restaurant choices along this section of Sheridan Road were limited to quick-service, fast-casual and a few family-dining rooms.  The launch of Onward restaurant in November, 2018, changed all that.

For McCormick who grew up on the North Shore, the opportunity to bake Onward’s way into the hearts of Chicago’s Northside is a happy challenge.

McCormick cut his pastry-chef eye teeth all over the country. After graduating from New Trier Township High School, he attended the French Pastry School in Chicago, and did an externship at the three Michelin starred Per Se in New York. Stints at the James Beard-award-winning Frasca Food and Wine in Boulder, and Atelier Ortega and Coco Love in Jackson Hole Wyoming, preceded his return to Chicago where he worked at L2O, and North Pond in Chicago, both Michelin starred.

But McCormick’s cooking adventures started much earlier than that.

Growing up with his siblings in Northfield, McCormick played a lot of football, basketball and other sports. But when he wasn’t doing that, he gravitated to the kitchen.

“I’d go over to my grandmother’s house in Northbrook, to experiment with all sorts of dishes. She encouraged me to cook whatever interested me,” he recalls. “Italian, Asian, barbecue, baking, you name it. She saw how much I enjoyed it; and I was good at it.”

“He was making classic French chocolates. They were beautiful, and I was fascinated to see that cooking could be both an intensive craft, and an artistic expression. I was completely hooked,” McCormick recalls.

With that, McCormick’s cooking experiments ramped up as he tried his hand at the recipes Torres posted.

“I tried them all,” Kevin recalls, laughing. “Most of the time, they were a complete and utter failure. It took me three years to realize that you had to temper chocolate before working with it.”

“I especially liked watching the World Pastry Team Championships,” he says, “where pastry chefs had to prepare showpieces, cakes and other baked goods under intense pressure. I’m a very competitive person, and watching these talented chefs compete convinced me that one day, I wanted to do that too.”

By the time he was in fifth grade, Kevin’s chocolate-making skills had progressed.

“I used to make a ton of chocolates and then take them to school and hand them to kids, saying, “Here. Eat this!” And they did. It was a built in test market to see how I was improving,” he says.

When he was 13, Kevin headed over to North Shore bakeries to learn in a commercial-kitchen setting: “Sometimes I got paid, sometimes I didn’t, but I didn’t care about that. I just wanted to learn.”

Kevin landed jobs at the Three Tarts Bakery Café, and Tel Aviv Bakery, and studied all of the baking books and food-industry magazines he could find in his spare time.

Meanwhile at home, McCormick’s mother, Karen, who worked in political offices and was a trustee for the Northfield township, recognized her son’s talent and let him do dinner parties where he had carte blanche to create the full menu for her guests.

“I went all out,” Kevin smiles. “Mom’s rule was that I could serve no more than 10 courses. But I found a loophole when I discovered mignardises (sweet little tidbits served at the end of the meal.) So I could make dozens of those and expand the possibilities.”

The decision to attend the French Pastry School finalized McCormick’s decision to focus on pastry.

“I realized that it could take the rest of my life to even scratch the surface. Becoming proficient at bread and pastries, gelato, chocolate, candy and breakfast—the full gamut, is a monumental achievement.”

Scratching his longtime itch to compete, Kevin had the opportunity to assist Chef Oscar Ortega in multiple competitions while at Atelier Ortega in Colorado. McCormick then trained and competed at the Mondial Des Artes Sucre in Paris, where he was recognized by a global judging panel for team USA.

But as McCormick spent the next several years honing pastry and bread baking techniques in restaurants, his views matured from, “Create the most artistically perfect expression of a pastry,” to “Create beautiful breads and pastries that guests will love and come back for.”

“It takes maturity, but as you grow in the industry, you learn this,” he says. “Pastry and breads are a perfect way to connect with guests. We may practice a lot of complex methods in our kitchens and compose playful presentations of dishes that invite guests to try something new. But people need that bridge, that “something familiar” that helps them take the leap into new territory. What vehicle does that better than bread or dessert?”

So has McCormick’s mom asked him to create any 10-course dinners back at home recently? “No,” laughs Kevin. “Now she’s perfectly happy to bring them all to Onward.” For more information, visit onwardchi.com/