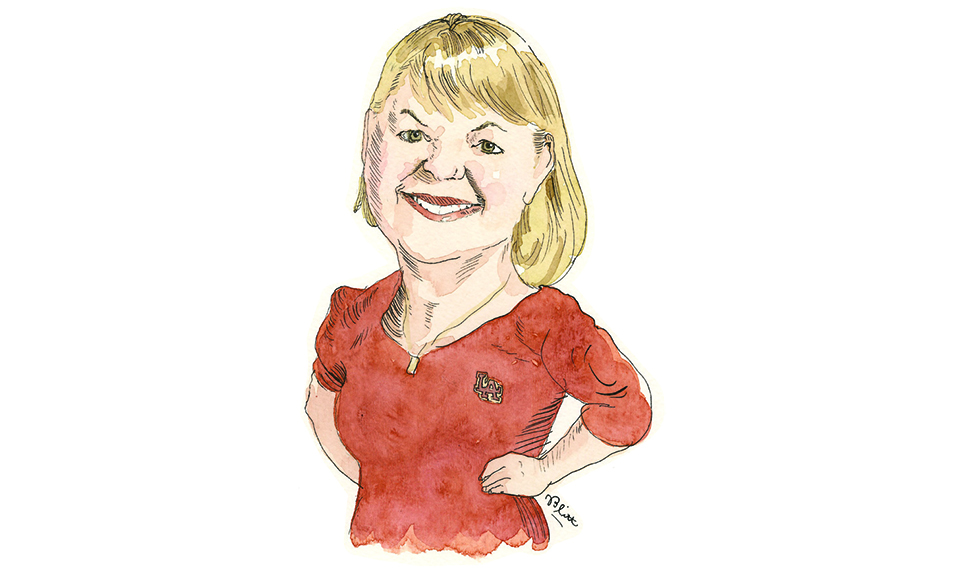 Book? Check.
Flashlight? Check.
A young Nancy Paridy was ready for bed only when she had collected those two items after brushing her teeth.

“That was me, the girl reading under the covers, so I wouldn’t get in trouble for staying up so late,” the forever-jovial and tireless Paridy recalls. “I loved to learn; I still do. When I was 6 or 7, I’d play ‘school’ all day, everyday. I’d put chairs in my room for my students. I was the teacher, instructing five of my neighbors until they had to return home.”

Paridy, no surprise, needed only three years to graduate from McCluer High School near St. Louis and the same number of years to earn a Bachelor of Arts at Western Illinois University in Macomb.

The youngest lawyer to argue a case before the United States Court of Appeals for the Seventh Circuit? Paridy, who, on September 17, became the first woman to serve as board chair at Loyola Academy in Wilmette, the largest Jesuit college preparatory school in the nation. All three of her children with husband Steve Naughton are Loyola Academy graduates.

“I’m excited about what Loyola Academy’s president, Rev. Patrick McGrath, is doing as a leader in education—particularly his focus on the future and strategic thinking,” says the 59-year-old Paridy, an Evanston resident since 1989 and the chief administrative officer and senior vice president of Shirley Ryan Ability Lab (SRALab) in Chicago.“Our academics at Loyola Academy? Amazing. Guess what I just found out? We have 11 National Merit Scholars. Eleven! “But,” she adds, “Loyola Academy isn’t just about academics; it’s also about love of learning and service to others.” Paridy, a tennis player in high school, learned how to play golf when her oldest child, Matthew, took a liking to the sport at the age of 8.

“I was thinking, ‘If I don’t play golf, I’d never get to hang out with Matthew,’” Paridy says.

Paridy became a golfer. Guess who asked her to spend five days in Scotland playing golf courses in July? Matthew, now 25 and a law school student at American University in Washington, D.C.

The son wanted to hang with mom in the birthplace of golf.

Her youngest child, Ellen, doesn’t have to travel far to visit Matthew. Ellen is a freshman at Georgetown University. Paridy’s middle child, Peter, learned Chinese at Loyola Academy. Intrigued and eager to learn, Peter’s mother wanted to take Chinese classes.The girl who played ‘teacher’ at home became the real student at home, twice a week for three years, with Marlene Ren—a Loyola Academy faculty member—serving as the teacher of a litigator who would receive the Top Women Lawyers in Leadership Award from the Women’s Bar Association of Illinois in 2018.

“Marlene … was … awesome,” Paridy says. Awesome would sum up, succinctly, Paridy’s duties at Shirley Ryan Ability Lab (SRALab), formerly known as the Rehabilitation Institute of Chicago. In addition to being its chief administrative officer and senior vice president, Paridy serves as general counsel responsible for all legal matters, oversees and directs the organization’s human resources, and is responsible for the ethics program, corporate compliance, facilities, security, food service operations, insurance needs, and government and community affairs.

The corporate secretary to all of Shirley Ryan Ability Lab’s corporate entities? None other than Paridy.

The size of her business card nearly matches that of a highway billboard.

SRALab is the first-ever “translational” research hospital where clinicians, scientists, innovators, and technologists work together in the same space, applying research in real time to physical medicine and rehabilitation.

“My office does not have a door,” Paridy says. “I like it that way. I like how open the environment is, how easy it is for me to interact with researchers and other valuable employees at all times.”

Paridy has cleaned trays and patients’ rooms at SRALab. Not because she had to out of necessity. She completed the tasks because that’s what consummate, passionate leaders do.

“Leadership,” Paridy insists, “is all about being sure the people around you are together and committed to a vision that had been established. I want people to get excited about a vision, and one of my absolute priorities for Loyola Academy is the expansion of our Fine Arts spaces and program. We believe firmly in the Fine Arts at Loyola Academy.

“We’re still tremendously excited the new pool and piazza our capital campaign enabled us to build.”

The easiest way to get Loyola University men’s basketball coach Porter Moser excited is the mere mention of Paridy’s to-die-for cassoulet. Ellen and Moser’s daughter, Jordan, (Loyola Academy, Class of ’19), are good friends, and one of Paridy’s favorite pastimes is cooking for house guests. Paridy (“I’m a foodie,” she declares) was an editor and restaurant critic for McCluer High’s student newspaper. She also joined the yearbook staff and held Student Council positions while holding serve as a tennis player for the Comets. But none of the extracurricular activities thrilled Paridy more than the opportunity to tutor a student after school did.

“I loved science classes in high school, and I loved helping a student who was struggling with science,” Paridy says. “You’d help a student understand; you’d see that student smile, blossom, and get excited about learning. I made people happy—a gift I’m grateful that I have. I learned what it meant to be a mentor in high school. When I got to college, my mentor was Sterling Kernek, a history professor. He pushed me, encouraged me.

“And he never stopped doing that because he loved that I loved to learn.”