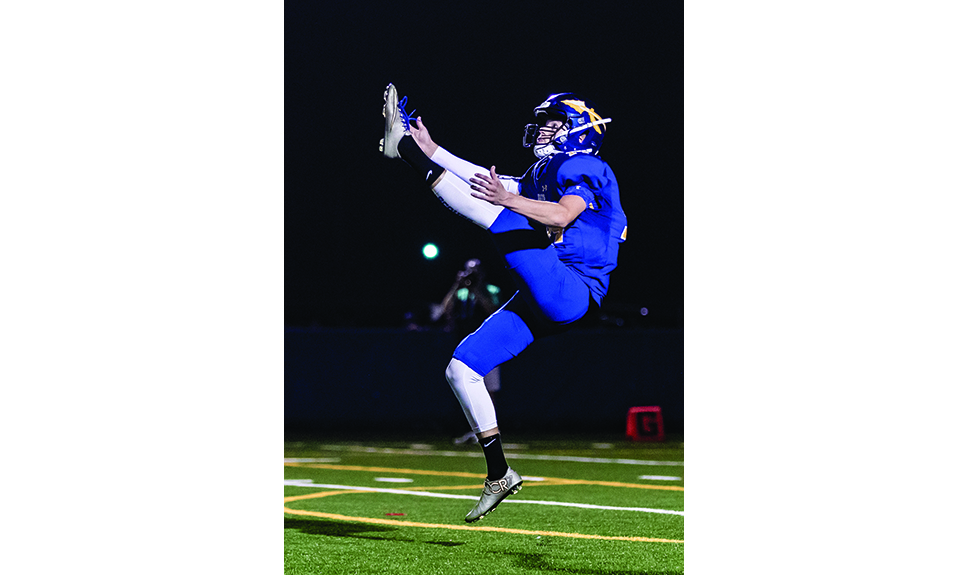 BOOM GOES THE FOOTBALL: Lake Forest High School senior punter Kai Kroeger follows through emphatically on a punt in the Scouts’ 39-7 loss to visiting Lake Zurich HS on September 20. The University of South Carolina recruit averaged 40.3 yards per punt last fall. Also a placekicker and a wide receiver, Kroeger finished with four catches for 104 yards, including a 69-yard TD snare, in the homecoming setback to LZ’s Bears. PHOTOGRAPHY BY MICHAEL GIANGIORGI

One of the best punters in the state used his hands to kick-start his team’s offense last weekend. Lake Forest High School senior Kai Kroeger— a 6-foot-3, 180-pounder who verbally committed to the University of South Carolina as a punter in the summer—caught a 69-yard touchdown pass from senior backup quarterback Michael Clarke in the first quarter of the Scouts’ homecoming football game on September 20.

“Pretty memorable,” Kroeger recalls a couple of days after notching his first varsity TD and finishing with four receptions for a game-high 104 yards. Alas, it was one of the few bright spots under the lights in LF’s 39-7 loss to Lake Zurich High School, which improved to 2-2 overall and 2-0 in the North Suburban Conference.

“Woke up at 12:30 the next day,” says Kroeger, also the Scouts’ placekicker. “Coach [Chuck] Spagnoli cancelled our scheduled practice on Saturday morning. We need to forget what happened Friday night, stay positive, get ready for our next game, move on.”

Kroeger’s left leg moves footballs. High. And far. He averaged 40.3 yards per punt as a junior last fall, with his career-best boot traveling 67 yards. That special moment came in a 24-7 defeat of host Lake Zurich HS.

Kroeger’s first two punts last weekend were 45-yarders, and his final one, a 50-yarder, forced the Bears to start a possession on their 15-yard line in the third quarter.

No wonder South Carolina’s football staff offered Kroeger a scholarship after Kroeger displayed his leg strength and sound technique at a Kohl’s Kicking Camp held at the Gamecocks’ Brice-Williams Stadium in late July.

“Not all college programs value special-team players as much as they do other players,” says Kroeger, who executed his first varsity punt as a sophomore in a 2017 playoff game. “But I found out South Carolina head coach Will Muschamp clearly values kickers and punters. I also spoke with some of the team’s special-team players, and I liked what I heard from them.”

Kroeger, like most kickers and punters, didn’t sign up for football at a young age with visions of field goals and punts dancing in his head.

But his first punt in organized football wouldn’t occur until the eighth grade, when he handled a long snap and swung his left leg at a descending pigskin in a Rec League heavyweight game.

Kroeger doesn’t remember the exact distance of that punt.

“I think it went between 40 and 50 yards,” Kroeger says. “My immediate thought after the punt was, ‘That’s a once-in-a-lifetime distance.’”

These days it’s practically a ho-hum feat for him.

“What I’m finding out, after years of punting, is that your best punts don’t happen just because of leg strength,” Kroeger says. “I’ll go out there, swing at 70 percent, and it’s a way better punt than if I had gone out there and attempted to swing my hardest. The harder you swing, the more likely you’ll shank one.

“Technique,” he adds, “matters in punting.”

Rest mattered, big-time, to Kroeger after last weekend’s game. He was shaken up by a hard hit while serving as a wide receiver in the second half. Junior Shelby Pruett and sophomore Leo Scheidler each punted once as a fill-in for Kroeger in the fourth quarter.

The fraternity of kickers and punters is a close-knit one.

“Jack’s a good guy; he contacted me on Twitter not too long ago and told me how psyched he was to play us,” says Kroeger, who attributes his well- spoken, highly approachable nature to his parents, Monica and Manfred, and Grandpa Steve, also of Lake Forest. “Jack and I are friends. We might get together on Sundays and kick it around. It’s always good to practice whenever you get the chance.”

Kroeger, who plans to major in special education at South Carolina, did Spanish and math homework on the afternoon of September 21, before getting together with several friends at an outdoor pool.

“We hung out, listened to all kinds of music,” says Kroeger, whose Scandinavian first name is pronounced like the Greek letter “Chi”. “Started with hip-hop and rap, then ended with country and some Bob Marley. It was a good time to chill.

They then watched ATM, a 2012 thriller/horror flick that centers on three people trapped in an ATM booth by a psychopathic hooded figure. Kroeger adores horror movies, saying he welcomes that edge-of-your-seat sensation. He has seen “Zombieland” more than a few times.

Kroeger did more homework on September 22, this time tackling an English assignment, before heading to Christ Church in Lake Forest for a Senior High Youth Group gathering from 7-9 p.m.

“A lot going on this weekend,” Kroeger says.

NOTABLE: Lake Forest HS visits Warren Town- ship HS (4-0, 2-0 in the NSC) in Gurnee Sep- tember 27 at 7:30 p.m. The Blue Devils have outscored their opponents 132-12. … Kai Kroeger said his parents found out well after his birth that his first name is a popular one in Hawaii. Lake Forest High School’s homecoming theme last weekend: Hawaiian.