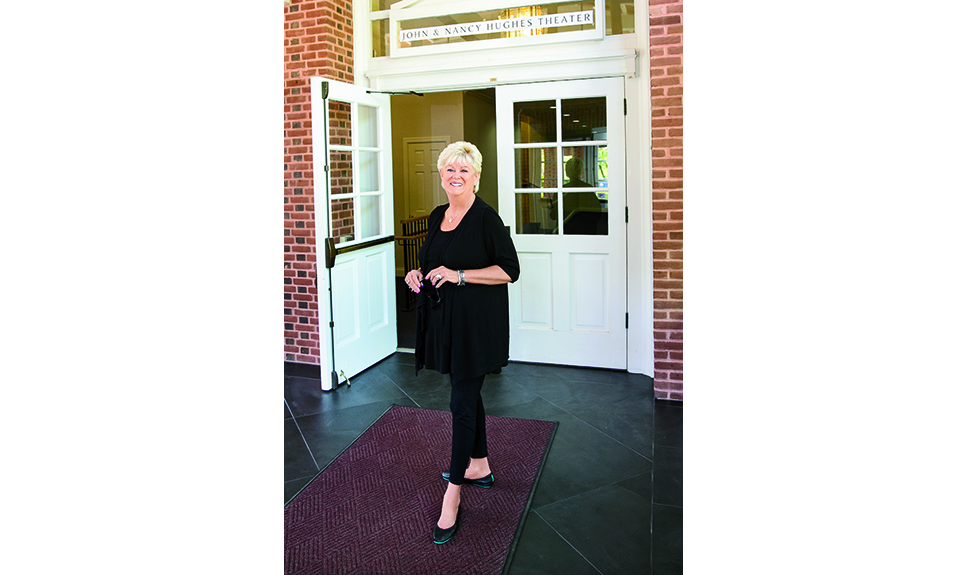 Beloved longtime Lake Forest resident, mother, grandmother, and friend to many Nancy L. Hughes died on September 15 at Northwestern Memorial Lake Forest Hospital.The 68-year-old was the widow of the late screenplay writer, director, and film producer John Hughes, and devoted her recent years to honoring his memory through philanthropy.

“Nancy Hughes was an enthusiastic and kind woman who deeply loved her family and community. She was a generous and dedicated philanthropist. Her contributions to Lake Forest—the hospital—Gorton Community Center, Deerpath Golf Course, and most recently, the Hughes Gateway at the beach—were foundational, leading to significant participation by many of her fellow residents, and improving the city in a permanent way,”said George Pandaleon, Mayor of the City of Lake Forest, when reached for comment. “Nancy exemplified the love of Lake Forest and its spirit of philanthropy that we all share. She will be greatly missed.”

Born in Chicago on April 22, 1951, Nancy was a resident of Northbrook in her youth, where she met fellow Glenbrook North High School student John Wilden Hughes Jr., in 1967, according to an extended obituary the Hughes family released to The North Shore Weekend.

Three years later, they were married—Nancy at 19, John at 20. After they both worked a series of odd jobs, John found success in Chicago advertising— eventually gaining employment as a creative director before transitioning into screenwriting, telling stories comprised of observations from the young couple’s lives and shared experiences on the North Shore.

The affinity the couple shared for their community was known around the world as the towns of Northbrook, Glencoe, Winnetka, and Northfield were seen on the big screen through John’s lens. With such films as The Breakfast Club, Home Alone, and Ferris Bueller’s Day Off, John became a filmmaking icon and brought Nancy along with him.

In 1988, he released the semi-autobiographical She’s Having a Baby, for which the final credit reads “Inspiration: Nancy Hughes.”Though firmly set in the North Shore, the script was written in the Brentwood neighborhood of Los Angeles, where the Hughes family lived from 1984 to 1988. The film’s emotional climax revolves around a harrow ing but ultimately healthy birth at Evanston Hospital, as it was then known, the same building where both of Nancy’s sons, John III and James, were born.

Set to Kate Bush’s hit song “This Woman’s Work,” a track personally commissioned by Hughes, the sequence exemplifies a moment where music tells a story that images alone can’t adequately express. It was fitting, considering Nancy’s life was steeped in music.

She is also remembered as having a particularly sharp skill for making a house a home—whether a family farm in Harvard, Illinois; a desert getaway in Scottsdale, Arizona; or in several suburban homes along the North Shore of Chicago. And it is perhaps fitting that even in the building in which she passed, Northwestern Memorial Lake Forest Hospital, there was a pavilion dedicated in the couple’s name.

Nancy had donated the 11,233-square-foot home on Westminster Avenue and surrounding two-acre property she had shared with John in Lake Forest as a charitable gift in the development of its new hospital building in 2014. “John loved the beauty of Lake Forest; I love Lake Forest,” she said in a press release released by Lake Forest Hospital at that time. “So when the opportunity to help advance the hospital presented itself, it was an easy decision to make.” 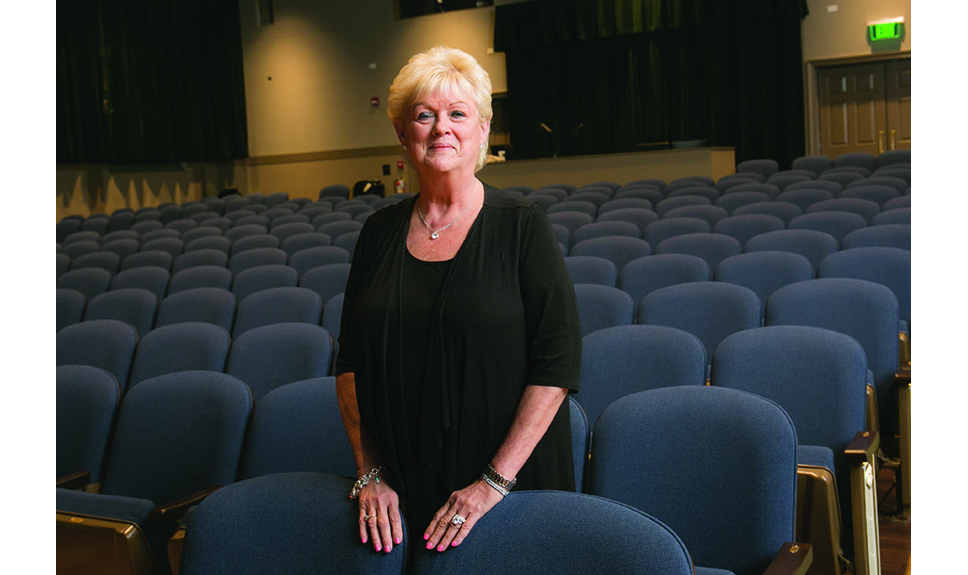 But Lake Forest was just one of the couple’s chosen hometowns. Nancy and John lived all over the North Shore, and the country. The family’s move to Los Angeles in 1984 was predated by a short stint in Scottsdale, Arizona. The state was familiar to John and Nancy, who’d spent a portion of their late teens living on a shoestring budget in Tucson, before ultimately settling in Glencoe in the early 1970s. Following John’s death in 2009, Nancy returned to Scottsdale, in 2011, and quickly established a wintertime oasis for herself and a steady stream of visitors, most notably her niece, Lyra Waggoner, and husband Josh and daughters Vela and Carina.

Nancy’s parents, Henry and Naomi Ludwig, were a constant presence in her life and that of her younger sister, Janice, who passed away in Illinois in 2000—an event that shook the family and strengthened their resolve to remain even more connected moving forward. Henry and Naomi, who wed in Chicago in 1947, remained married for more than 65 years. John’s untimely death in 2009 prevented the couple from reaching their 40th anniversary, a particularly difficult circumstance for Nancy to cope with as she faced life in his absence, according to the family.

For the subsequent decade, Nancy was deeply committed to the long-term health and care of her parents. She held vigil over Henry as he passed from complications from dementia at age 90 in 2013, and had welcomed Naomi into her Lake Forest home for the final months of her life, before dying in her sleep on September 5. The night after the services for Naomi, who was buried beside her husband and daughter at Memorial Park Cemetery in Skokie, Nancy fell ill. For five days, she was treated in the intensive care unit at Northwestern Memorial Lake Forest Hospital, before succumbing to complications from a blood infection, surrounded by friends and loved ones.

In her final years, Nancy was a dedicated philanthropist, especially in her beloved Lake Forest. “We had the privilege of getting to know Mrs. Hughes during her visits to Deer Path Inn. We will always remember her gracious presence, her kindness to the staff, and her disdain for the martini glass,” remembers Matt Barba, General Manager of the Deer Path Inn in Lake Forest. “Mrs. Hughes’ contributions to Lake Forest knew no bounds.”

The same year she donated her property to the hospital, she gave a $2 million lead gift to Lake Forest’s Gorton Community Center as part of its renovation. Today, the John & Nancy Hughes Theater is a state-of-the-art facility that regularly hosts lectures and screenings, including Sibylle and Robert Redford’s 2018 production of “The Way of the Rain” as part of a benefit for Brushwood Center at Ryerson Woods.

On her first visit to Gorton since the improvements had been made, she expressed gratitude to the city and its people for the refuge it gave them.

“Really and truly, for the amount of years we lived in Lake Forest and with John’s career in the movie industry, we always had our privacy in Lake Forest,” she said. “When I learned that Gorton was renovating the theater, I thought it was a good way to thank Lake Forest.”

“None of what we’re doing now would have been possible without her,” she says. “I cherish her kind words of encouragement and will miss seeing her pop in for a film screening. We will always remember her.”

Other recent projects include the John & Nancy Hughes Clubhouse at the Deerpath Golf Course, which was made possible by Nancy’s December 2017 donation of $500,000. She called it a “Lake Forest treasure.”

And then, on September 14, the day before she passed, Lake Forest residents gathered for the dedication of the Hughes Gateway at Forest Park Beach, rebuilt with Nancy’s assistance after flooding destroyed the previous entrance.

The site is just blocks from the Westminster Avenue home she donated to the hospital where she died—the home where her family had lived from 1988 to 2009, and where John wrote Home Alone. As stated in the family obituary, “In death, the couple is united once again.”

Our parting memory comes in the words Nancy spoke at the opening of the John & Nancy Hughes Theater, standing beneath the signage bearing her family’s name.

“Lake Forest is a great community to raise children and living here has been one of the happier times in our lives,” she said. “When we found our Lake Forest home, there was no question that we wanted to live here. This is where we lived the longest. There is no other place that compares to Lake Forest.”

Donations can be made in her name, Nancy L. Hughes, to Northwestern Memorial Lake Forest Hospital.