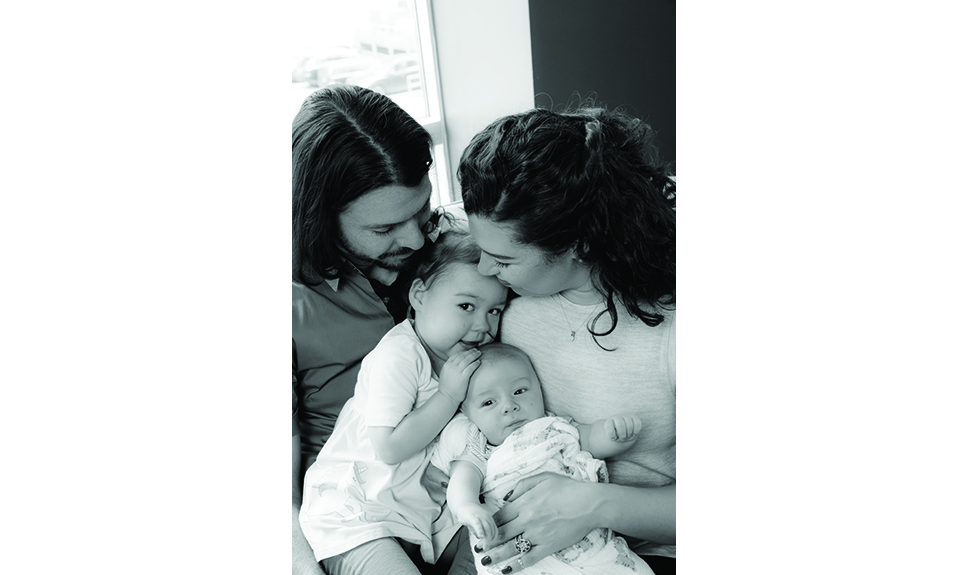 David and Priscilla Lang of Highland Park with their children, Opal and Apollo.

On the joyous day Priscilla Lang gave birth to her son, Apollo, in Evanston Hospital in late April, she implored the medical personnel to discharge her—STAT.

Or, at the least, immediately after she had stayed for the required minimal number of hours following childbirth.

Lang, of Highland Park, had her other child on her mind. Daughter Opal, 2, had undergone heart transplant surgery at Ann & Robert H. Lurie Children’s Hospital in Chicago—three days before Apollo entered the world.

“I explained it all to the doctors and the nurses at Evanston Hospital,” the 35-year-old Lang recalls. “I found out I had to stay there for 24 hours. I asked them, pleaded with them, to do everything they could to let me see my daughter again as soon as possible.”

She was discharged after 24 hours and re-united with her brave, resilient Opal. Opal and Apollo are happy, healthy toddlers today.

“I will always look back at those days as celebrations of life—Apollo being born and Opal getting a second chance at life,” Lang says.

Love and undying support all around Lang and her husband, 37-year-old Tyler, and their families helped immensely before and during that emotional, momentous April 24 through 27 stretch. So did Ronald McDonald House Charities of Chicago and Northwest Indiana (RM-HC-CNI).

Its mission: To create, find, and support programs that directly improve the health and well- being of children and their families. When a child is sick, the nonprofit declares, a family is sick. Ronald McDonald Houses exist so families can get better together.

“How wonderfully we were treated there, along with the caring, hardworking people we met while getting the opportunities to decompress, restored my faith in humanity,” says Lang, who met her future husband while both were distance runners at rival downstate high schools Roxana and Wood River.

“After moving up here, to live in Chicago before moving to Highland Park two years ago, I felt I was a missing part of a tribe. With Opal’s medical issues since December, I couldn’t go home to Roxana because I needed and wanted to be here for my daughter. Then, with doctors and nurses and Ronald McDonald House volunteers coming together for us, suddenly I had a tribe again.”

Lang, an acupuncturist and yoga instructor, and her father, David, were in the Langs’ living room in Highland Park last December when Opal—who had received a pacemaker after being diagnosed with bradycardia, or a slow heartbeat— started to make a strange noise. The 15-month-old girl turned blue. She groaned.

Opal was airlifted to Lurie Children’s, where doctors determined she would need a heart transplant. While on life support a second time, she suffered a stroke.

Opal and her second heart continue to undergo six hours of therapy each week at Shirley Ryan AbilityLab in Glenview.

“About 90 percent of her skills are back,” Lang says. “The therapists say Opal is serious about her therapy. The way she’s grown since the transplant, how much energy she has, I’m amazed, and I’m grateful each time I realize someone else’s heart is in my child.

“I see Opal flourishing in therapy, going for it.”Opal Lang is a major figure in a Ronald McDonald House of Chicago and Northwest Indiana ad campaign. Images of her can be seen on bus shelters and other structures in Chicago.

texted it to him,” Lang says. “The message was, ‘We saw Opal today.’We are beyond grateful for everything Ronald McDonald House did for us from start to finish. Those red Ronald McDonald House containers you see in McDonald’s restaurants, with donated money in them? I look at those totally differently now.”

Among Lang’s favorite sounds today? The extended roar a menacing Opal makes after someone asks her to imitate a lion.

“Opal is so enthusiastic, and she can be such a ham at times, quite a character,” a beaming Lang says. “She’s social and intrigued about things all around her.”

Months before the birth of her little brother, Opal Moon Lang would tap-tap her mother’s belly and coo, “Baby, baby.”

“And 48 hours after Apollo was born,” Priscilla Lang says, “Opal snuggled up against him.”