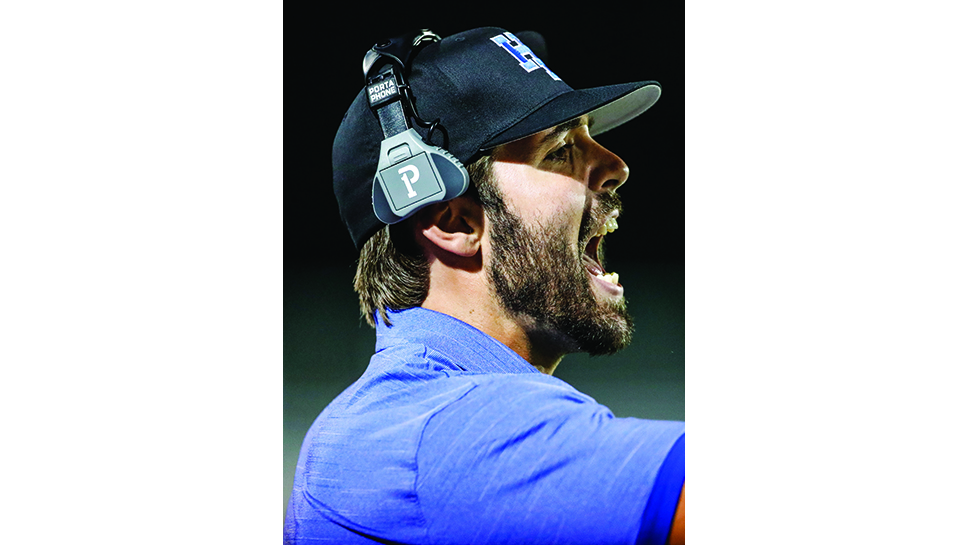 David Lindquist looks to his left at football practice.

Looks to his right.

There’s HPHS assistant coach Owen Kugler, a former all-state offensive lineman at HPHS. “Plus we have several Highland Park graduates coaching our freshmen and sophomores,” says Lindquist, himself a former HPHS standout football player. “Our football staff members have a lot of pride in Highland Park High School. “They believe in giving back,” the former

“Jimmy told me only one other team in program history had scored more than 69 points in a game,” Lindquist says. “I believed him; we all did. He’s ‘Mr. Highland Park’.”

Zion Griffin was a helmet-wearing Mr. Incredible against Wheeling’s Wildcats. The junior running back—mostly a varsity defensive back for the Giants last fall—returned two kickoffs for touchdowns and rushed for two more from the line of scrimmage.

Griffin finished with 197 yards on only five carries. Or a 39.4 yards-per-tote average.

Crane, a 6-foot, 165-pound signal caller, connected with Washington for a 30-yard TD and ran for a 10-yard TD against the Mid-Suburban League East team, a year after HPHS needed overtime to edge host Libertyville 28-27 in a thrilling season opener.

“Our offensive linemen, all of them, were amazing against Wheeling,” Crane says. “Each did his job. Each made it easy for our running backs and for me.”

The Giants ran into a tough opponent in Week 2, falling 28-0 to host Lakes High School on September 6. Lakes’ Eagles (1-1) tallied all four TDs in the second quarter.

But the Giants generated plenty of positives in Lake Villa, in addition to blanking Lakes in three quarters. Fishman—who plays on both sides of the line—and senior inside linebacker Drew Deer finished with eight tackles apiece; junior linebacker/running back Gio Volpentesta had five tackles and a pass breakup, and he rushed nine times for a team-high 47 yards; senior safety Tanner Mack contributed five stops, gained a combined 77 yards on four kick-off returns, and caught an 11-yard pass from Washington on a fake-punt play.

“It was one game, one week,” Crane says of the opener. “You can’t get too far ahead of yourself. If you do, you’d lose focus.”

Eyes will be on the Giants (1-1) on September 13 (7:30 p.m.), when Lindquist’s crew puts the shutout loss behind it and travels to battle Buffalo Grove High School (0-2), another MSLEast representative.

“We don’t have a lot of guys on varsity, compared to other schools, but our guys are well- coached,” the 5-foot-6, 165-pound Gimbel says. “Our head coach always tells us, ‘Control what you can control.’ We control our focus, our at- titude, and our effort. What I liked most about what we did against Wheeling was how we started; we came out fast and physical. We had a great week of practice. We were excited to start the season. And you know what? We made a statement with a win like that. We also proved some people wrong.”

“Our head coach keeps his messages short and sweet,” Crane says. “He keeps us focused, too. Coach Lindquist has expectations, pretty high ones. He’s demanding.