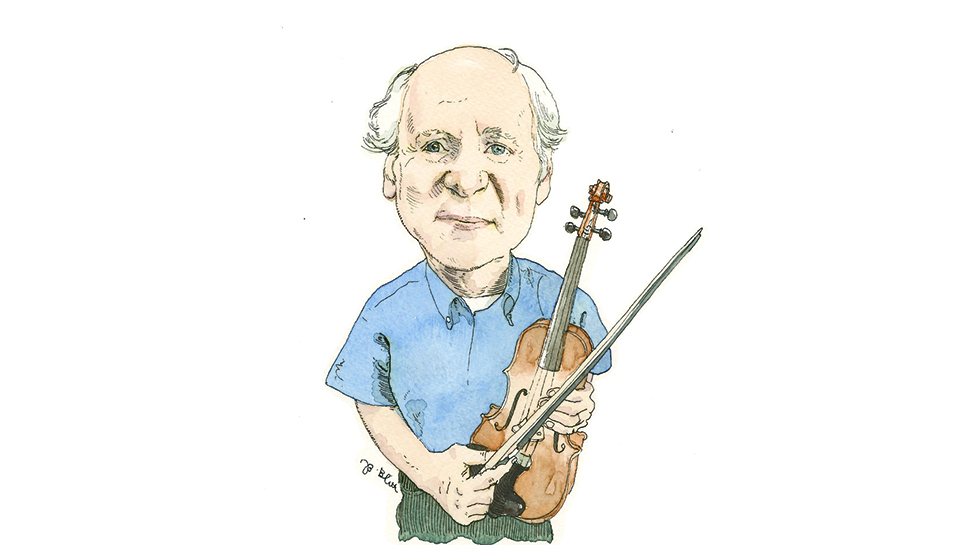 Late at night,when he attended Lane Technical High School in Chicago, Gerry Field would occasionally pick up
his violin and slip out of his house.

He wanted to practice without disturbing his family and neighbors.

Rows of idle washers and dryers, as well as empty detergent containers and scattered coins.

“A 24-hour Laundromat—that was my secret place to practice violin patterns, sometimes for hours,” the 70-year-old Field recalls. “I don’t think young musicians would want to do that these days. I’m not even sure Laundromats stay open 24 hours in Chicago anymore. I loved going there back in the 1960s, because nobody was ever around. And I don’t even think my parents knew I was gone.”

Field’s business—Field Violin Workshop, established in 1979, in a Rogers Park apartment — hasn’t strayed
from its current location in the Ravinia District since 1991. A violin maker and Highland Parker who lives only four blocks from the shop, Field also repairs and restores violins, violas and, cellos, and teaches violin to five students in the workshop. The youngest in the quintet is 10, the oldest 76.

“Music is more than my passion,” says Field, who met his future wife, Jutta, when both were students at Chicago-based Kenneth Warren & Son School of Violin Making in the 1970s. “It’s a major part of me, a part of what makes
me tick. Music gives me calmness. I’ve always believed that it’s importantto express yourself, and I enjoy doing that through the universal language of music.”

Enter the front of Field Violin Workshop on Roger Williams Avenue, and you’d swear it doubles as an expansive, cozy den after business hours. The workshop area in the back is home to workbenches, all kinds of tools, and hanks of horsehair for bows.

It’s a busy, busy room, cluttered back there, yes, but a too-neat, everything-in-the-drawers workshop area is for new ventures—and for those about to go out of business.

“I enjoy my work; it’s satisfying,” Field says, adding he has fixed instruments for Ravinia Festival performers before their shows. “There’s an art to fitting pieces of wood together. And there’s nothing like using a tool that allows you to carve wood like it’s butter. What’s important to me is making a musical instrument, or re- pairing one, that will make it feel comfortable, especially for a young student.

“You don’t want a beginner to get discouraged.”

Field was 6 when a man walked into his first-grade classroom and asked,“Who wants to play a musical instrument? ” Field heard “musical”and raised his hand immediately.All he had to do after that was get adult to sign a form that would allow him to rent a violin.

“I tricked my grandmother into signing it,” says a grinning Field, sitting near a large desk and a black piano in his workshop’s warm entrance area.

Lane Tech was an all-boys school when Field attended it from 1963-67. The Chicago Symphony Orchestra ran the school’s music program then, and music enthusiasts like Field took three periods of orchestra each day every semester, including a music theory class. But that meant Field had to load up on math and science and history classes in the summers in order to graduate on time.

“The only honors class I ever took in high school was physics, in summer school,” says Field, a freelance violinist/fiddler who performs occasionally as a member of The Sullivan Brothers. “I didn’t mind that, though, because I got so much out of those music classes. It was almost like getting a college education in music before college.”

Field then enrolled at the University of Illinois-Chicago for a couple of years before heading to Europe with a couple of friends to “major” in Performing for Patrons at Cafés. (Or something like that.)

Field also joined musical groups abroad, including the trio Morning Column.The group entertained at a festival in Belgium. The festival’s master of ceremonies was none other than Frank Zappa.

Field watched the televised 1969 moon landing in a Paris café and befriended high-wire artist Philippe Petit after watching him negotiate a unicycle—while juggling pins, among other items—on a wire between trees near another café. In 1971 Petit high-wire walked between the towers of Notre Dame Cathedral in Paris and accomplished the same feat three years later between the Twin Towers of the World Trade Center in New York City.

He had not received permission to attempt either of the daring walks.

“What a lovable character,” Field says of Petit, 70, and a New York City resident. “He reminds me of Harpo Marx.”

Their first date was a walk in Chicago. Their second date?
Same as the first.
They got married in 1980.