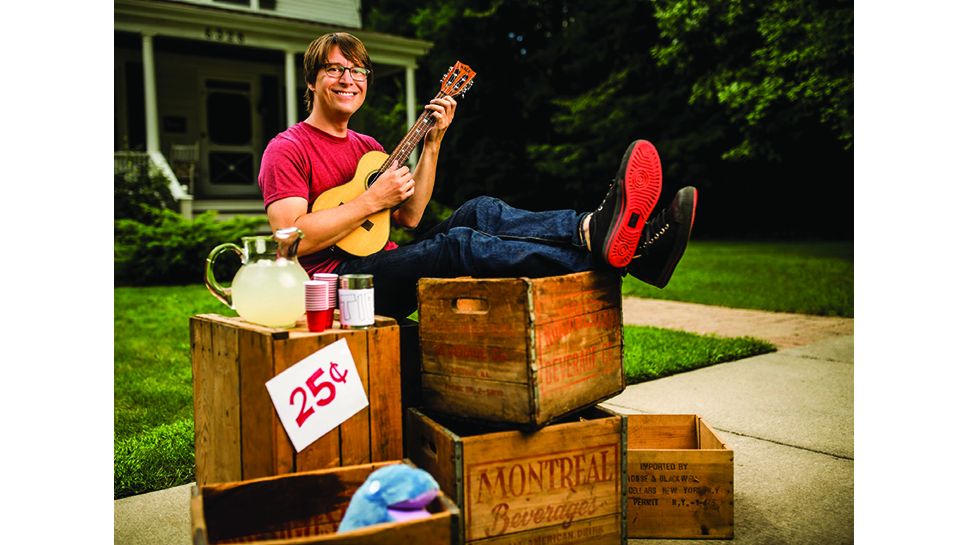 Three-time Grammy nominee Justin Roberts & the Not Ready for Naptime Players will present an interactive, one-day-only “Be Your Own Band” concert on Saturday, September 21, at Marriott Theatre in Lincolnshire. An “all-star” of the family music scene, the Evanston resident has been creating the soundtrack to families’ lives for more than 20 years.

His devoted fan base enjoys classics like the fist-pumping “Pop Fly” and parent favorite “Stay-At-Home Dad.” Bandmates Liam Davis and David Winer also live in Evanston but the group is known around the nation for their intelligent and whimsical brand of indie kid rock.
The 60-minute concert next weekend will include an ample serving of Roberts’s fun, interactive, and highly sophisticated songs—performed with his five-piece band accompanying him on bass, drums, electric guitar, trumpet, melodica, keyboard, acoustic guitar, ukulele, harmonica, and more. However what’s new and different about the “Be Your Own Band” concert is that kids get a chance to make their own music and showcase Roberts’ own compositions. 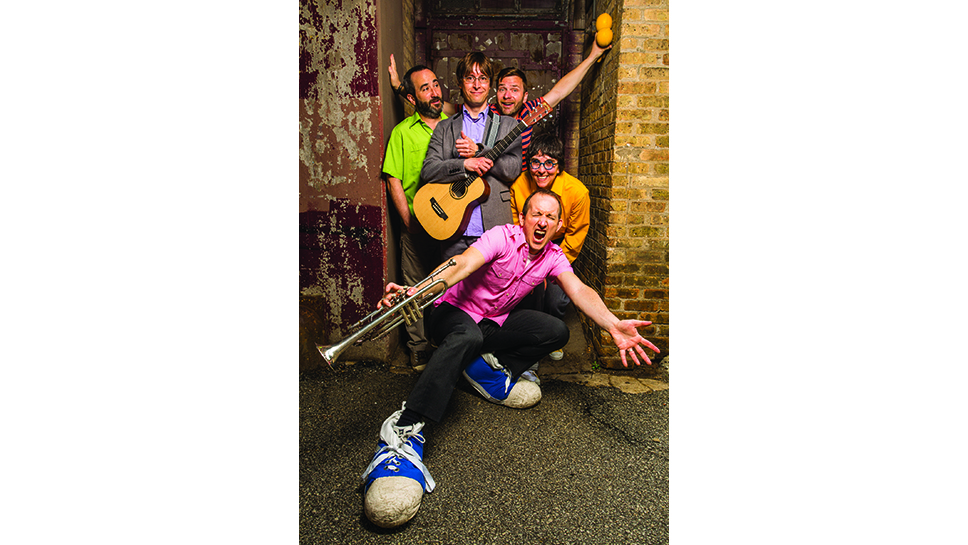 Justin Roberts and his Not Ready for Naptime Players. PHOTOGRAPHY BY TODD ROSENBERGRosenberg

We had the opportunity to talk to Roberts last year. Here’s what he had to say:

I’d like to begin by congratulating you on the Grammy nomination you received for “Lemon- ade.” Being your third Grammy nomination, can you please say what it means to you to receive this kind of attention from The Recording Academy?

It was incredible to receive the news that “Lemonade” had been nominated for best children’s album. I’ve been making recordings for kids and families for 20 years, and it’s really amazing to know that all of the work that goes into making this music is celebrated.

The Chicago area is rife with artists associated with the family music scene, including you, Ralph’s World, Laura Doherty, Little Miss Ann, Wee Hairy Beasties, among others. Why do you think this is the case for the region?

Chicago is incredible, but I think this is also happening all over the country. I made my first kids recording in 1997 which was the same time that Laurie Berkner was making her music in New York City. Around the time I put out my second album “Yellow Bus,”Dan Zanes and Ralph Covert were putting out records,and shortly after that,They Might Be Giants, the Verve Pipe, and Barenaked Ladies made recordings for kids and families. Now there are large pockets of performers for kids in NYC, San Francisco, Los Angeles, Seattle, Portland, and many other places.

I have a theory that the new wave of family music has something to do with parents wanting to derive as much enjoyment from the music as their children do. Am I on the right track?

I think that sounds about right. I started writing songs for kids when I worked at a preschool in the early ’90s. I was (and am) a bit of a music snob and so I started playing Sam Cooke and traditional Irish songs for the kids and saw how they responded to that music. When I introduced my own songs to them, I tried to write things that I appreciated as an adult but also resonated with kids. I’m still working in that direction.

There are songs on the album about animal and aquatic life—“Me and My Kangaroo” and “Eight- Legged Octopus.” Is there an unwritten rule about including these kinds of songs on family music recordings?

The very first song I ever played for kids was called “Giraffe/Nightingale” and it was written for adults originally. It was a bunch of verses with no chorus and no repetition. Kind of the opposite of what people thought kids’ music should be. The kids at my school memorized every word and sang it at the open house. I think it was partly the attraction to the animals that made it work. Since then I’ve written songs about hippos, polar bears, rhinos, and just about every animal imaginable. However, all those songs are always about something else. “Giraffe” is about recognizing the good in yourself, “Imaginary Rhino” is about the creative process, and “Octopus” is about having to let go of something you love but can’t hold on to.

In addition to the above-mentioned Evanstonian Liam Davis and Evanston resident David Winer being members of your band, you are also joined on “Lemonade” by Evanston resident Nora O’Connor. As someone who has a presence in Evanston, can you please say something about the music community?

Evanston is full of so many wonderful musicians and music venues. My producer and longtime band mate Liam Davis (of the band Frisbie) grew up there and currently resides there. My trumpet player David Winer lives in Evanston and writes music for commercials. Nora O’Connor (The Flat Five, Decemberists, Neko Case, Iron and Wine), Freda Love Smith (Blake Babies, Sunshine Boys, Mysteries of Life), and Jason Narducy (Split Single, Bob Mould, Superchunk) all live there too. It’s crazy the amount of musical talent that is hiding out in Evanston.