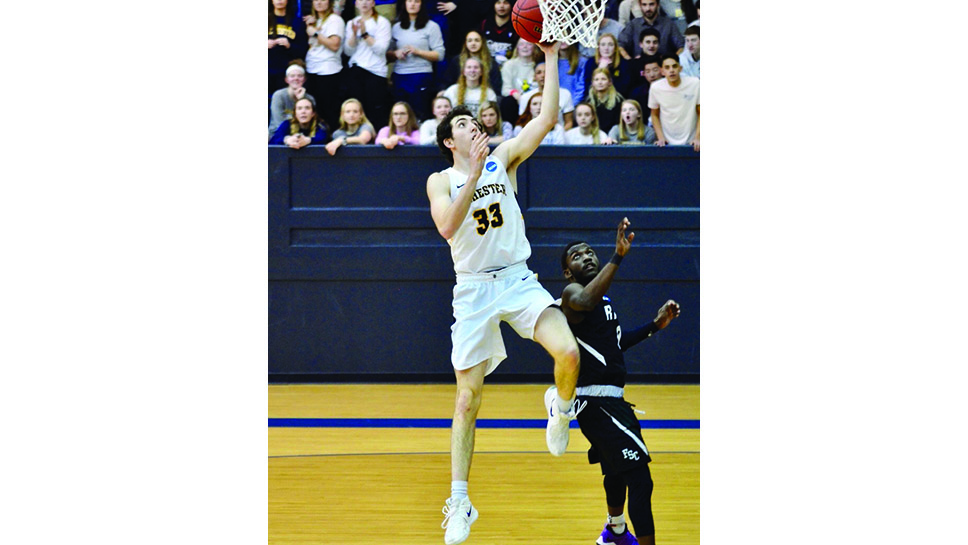 Mike Mangan could not believe what he had just heard.

It was during the University of Rochester men’s basketball season in 2015-16, when his roommate and freshman teammate, Ryan Clamage, shared one of his goals.

“Are you crazy?” Mangan blurted to his fellow guard. “You hardly play.”

Mangan was right. Clamage would end his rookie season at Division III Rochester with averages of 1.5 points and 1.2 rebounds in 19 games.

More than three years later—on August 27, 2019—Clamage, armed with degrees in business and political science, landed in Israel to begin a career in Ra’anana, not far from Tel Aviv.

He didn’t fly there to open a business.

He didn’t fly there to serve as a political consultant.

So much so that Clamage did not have to prove himself at a tryout or at a basketball showcase. The 6-foot-5, 195-pound Clamage, a shooting guard, hired agent Raz Gal in the spring and signed an eight-month contract on July 20.

What happened? How in the world did Clamage go from a bit player to a player who will earn way more than two bits in a sport he loves?

“The Ryan Clamage story is a special one,” Rochester men’s basketball coach Luke Flockerzi says. “We recruited Ryan on potential. He had good length as a wing. There was upside there, too; we could see it. He came to our program and found out, right away, that he’d have to climb a high hill in order to play significant minutes for us. Hard work and determination helped him reach that point.

“Ryan,” the coach adds, “went from a player who played limited minutes as a freshman to the best player in our conference in his senior season.”

Clamage earned Player of the Year honors in the University Athletic Association and Third Team All-America status after pacing Rochester’s Yellowjackets in scoring (16 points per game) and rebounding (6.7 rpg) in the 2018-19 season. The Lake Forest native also averaged 3.4 assists and 1.2 steals.

“I paid attention in practice in my first two seasons, especially to what one of our best and most competitive players, Sam Borst-Smith, was doing,” says the 22-year-old Clamage, who played basketball, baseball, and golf at LFA and was named

Most Valuable Player of the Caxys’ hoops team after his senior season. “I was fighting for playing time with five other freshmen my first year. I tried to emulate parts of Sam’s game that made him effective and efficient. Parts like his spacing, his shot angles, what he did without the ball, and what he did to play within our team’s system.”

Clamage dropped a career-high 41 points on visiting Carnegie Mellon in a victory January 18, netting 16 of 25 field-goal attempts. He poured in 20 or more points in six other games in his senior season.

“Ryan’s point totals in games snuck up on me often, snuck up on everybody,” Flockerzi says. “A lot of that had to do with his multifaceted game and how efficiently he played. He’d hit a midrange jumper one minute, then make a layup after a steal, then maybe score on a pick-and-roll. So many times, I’d look up on the scoreboard and notice he’d have 18 points already. In his 41-point game, I didn’t think he had scored more than 25 points.”

Clamage, a citizen of the United States and Israel, worked out twice a day and helped a local contractor flip houses this summer. He nailed jump shots in gyms. He hammered nails in houses. Clamage also volunteered for Highland Park- based Beyond Sports Foundation, serving 10 hours a week as a history tutor for a Big Ten football prospect. He even found time to binge watch most of the first season of The Sopranos.

His older brother, 26-year-old Eric, a Chicago lawyer, is thrilled about Ryan’s opportunity in Israel. So are his other family members: parents Ed and Audrey; sister Lauren, 24; and brother Austin, a junior basketball player at Brandeis University.

“Eric has been a very good big brother to me, constantly supportive,” says Ryan, who as a sophomore, tallied the game-winning basket in the last minute of a Sweet 16 NCAA Division III playoff game against seventh-ranked Mari- etta College. “Eric is happy for me. He’s also amazed I’m going to play pro basketball. Not too long ago he looked at me, smiled, and told me, ‘I think it’s sick what you’re about to do.’”

Mangan, Clamage’s former college teammate, is no longer afflicted with the “I Doubt Ryan Clamage” condition he’d contracted in the winter of 2015-16.

“It was incredible, watching how much he developed as a basketball player from his freshman year to his senior year,” says Mangan, a Winnetka native who works in the private wealth department at Morgan Stanley in Chicago. “I mean, Ryan was barely recruited and found himself in what was essentially a walk-on situation at Rochester. But his steadfast confidence and great work ethic, each year, lifted him to the point where he became an All-American and the best player on the court in most of our games.”