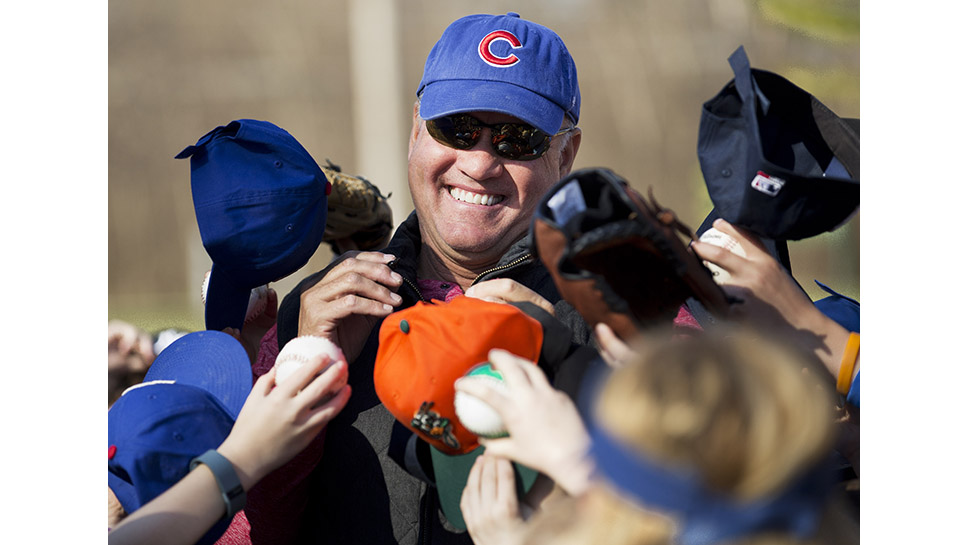 Remember “The Ryne Sandberg Game” at Wrigley Field in 1984?

A 59-year-old Lake Bluff resident certainly does, and there’s a good chance he’ll revisit it September 12 for an audience at the Gorton Community Center in Lake Forest.

“Ryno” was the Chicago Cubs’ second baseman— and future Hall of Famer—on that June 23 (Sand- berg’s jersey number) when he struck a pair of late home runs against St. Louis closer Bruce Sutter in the Cubs’ stunning, thrilling 12-11 victory.

Sandberg, the 1984 National League Most Valu- able Player and a Lake Bluffian since 2016, will be joined in Gorton’s intimate Stuart Room by sports agent Alan Nero, who has represented five Hall of Famers, including Wade Boggs. Sandberg and Boggs were inducted into the Hall of Fame in Cooperstown, New York, in 2005. The third major baseball figure for the unique event will be former Atlanta Braves owner Bill Bartholomay, 91.

“Talking Baseball with Ryne Sandberg, Bill Bartholomay & Alan Nero” starts at 7 p.m. and ends at approximately 8:30 p.m. September 12, with Lake Forest native, author, and former journalist David Sweet serving as moderator. Among the subjects to be discussed are the state of baseball, how Major League Baseball can appeal to a younger audience, what legal sports betting will mean for the sport, and the chances of international expansion to places such as Mexico and Europe.

Following an hour-long discussion covering a range of topics, the event—highly recommended for ages 12 and older—will continue with the panelists fielding questions from the attendees for 20 minutes.

The evening concludes with a meet-and-greet session. A cash bar with beer, wine, and non-alcoholic beverages will be available before and after the talk and during the session.“I’m looking forward to hearing the perspectives from three men who have been an integral part of baseball for decades,” says Gorton Community Center Chairman of the Board Tim Hender, whose father-in-law is Mr. Nero. “And you know they’ll all have great, interesting stories to tell.

“It’ll be exciting,”he adds,“and it represents another example of our mission at Gorton to bring world-class programming to our community.”

The “Talking Baseball” idea, Hender notes, gained momentum after Hender and Gorton Community Center Board Member Sally Downey started “kicking it around” more than a year ago. Bartholomay is Sally’s father. Nero has known Sandberg for many years. Hender asked Nero to contact Sandberg and invite him to be a part of the gathering.

“Alan called Ryne and told him the event would support Gorton, and Ryne said, ‘Sure,’” Hender says. It didn’t take Team Gorton long to select a moderator. Before his first book was published in 2010, Sweet worked as a columnist for NBCSports.com, SportsBusiness Journal, and The Wall Street Journal. “Perfect,” Hender says. “With his knowledge of sports, with his extensive background in sports journalism, David was the one we thought of right away to lead the discussion. It was a team decision. We have a great leadership team at Gorton.”

“To have three guys, like Ryne and Bill and Alan, all in one spot and talking about baseball—how fortunate is that going to be for everybody in room?” says Sweet,who has written two sports books one about former Kansas City Chiefs owner and World Championship Tennis co-founder Lamar Hunt and one about the USA men’s basketball team at the 1972 Olympics.