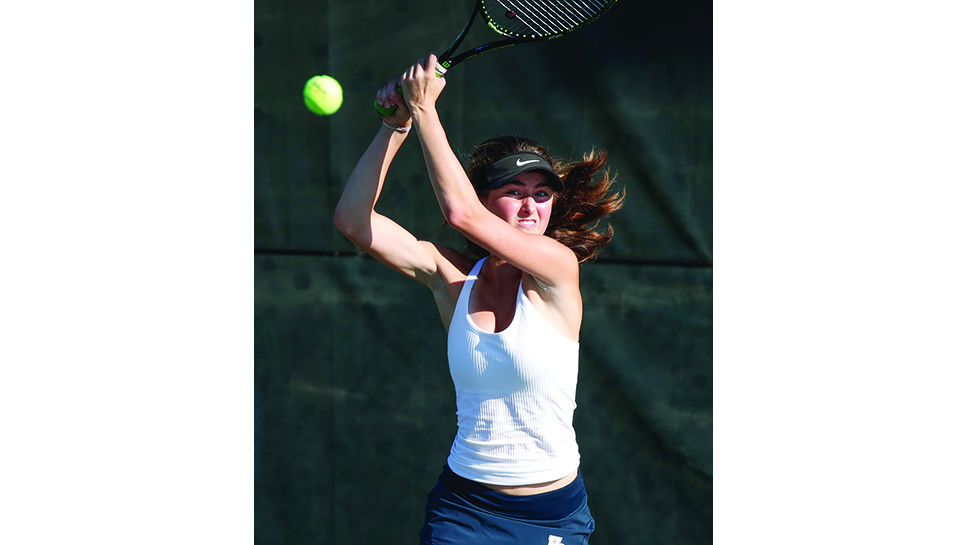 Highland Park High School senior Samara Michael, seen here in a tennis match against New Trier Township High School in Winnetka last year, partnered with then-senior Monique Brual to finish third in doubles at the Class 2A state meet last fall. Look for Michael to play most of her doubles matches with her twin, Halle, this fall. PHOTOGRAPHY BY JOEL LERNER

The woman in the senior assisted living facility in Evanston reached into a jar filled with pieces of paper. A question had been written on each piece.

The woman grabbed the one that asked,“What’s the most spontaneous thing you’ve ever done?” She looked at a videographer in the room and proceeded to answer the question, recounting how young she was when she got married. The woman continued to reflect and talk.

The videographer—Samara Michael, founder and owner of MemoVids—continued to do her job.

“The video was for the nursing home to use on its website,” Michael says. “I wanted to show what it was like to live there, what the elderly were like there.”

Not so elderly. In fact, not even out of high school yet.

Michael, a senior and fourth-year varsity tennis player at Highland Park High School, launched MemoVids in her freshman year after discovering how much she enjoyed producing video montages of her family vacations.

Michael’s work on the other side of the lens stood out last fall, when she and then-senior Monique Brual placed third in doubles at the Class 2A state tennis meet in Buffalo Grove. Michael and Denison University-bound Brual routed the Fremd High School duo of Akari Matsuno and Kyra Emmanouilidis 6-1, 6-1 in the match for the bronze medals.

Matsuno/Emmanouilidis had defeated the pair of HPHS Giants twice in straight sets during the regular season.

“I loved watching them play well and go as far as they did at state,” says junior teammate Kathryn Murphy, who competed mostly at No. 2 singles in the 2018 season.

“They were so pumped up for that last match. Each was at the top of her game. Each stayed excited throughout the match, stayed in the moment,” Murphy adds. “Samara has an amazing forehand. The shot I love the most is her down- the-line forehand when one of her opponents is at the net. She likes to rip that shot.”

The third-place state showing in doubles ranks second all-time in program history, trailing only the state championship claimed by Lindsey Goldstein and Debra Streifler in 2001.
Michael and Brual had also qualified as a state doubles team in the 2016 and 2017 seasons, reaching the quarterfinal round in the latter.

“It was rough at the beginning, playing doubles,” admits the 5-foot-8 Michael, primarily a singles player from the age of 4 until the second week of her freshman season. “Junior year, I felt I had finally figured it out. Monique and I became more comfortable as doubles players. I played aggressively at the net, and she did a great job setting me up.”

Next up for Michael, with the 2019 season set to begin later this month?

More doubles action, likely with someone who has known Michael her entire life.

That someone is Halle Michael, Samara’s twin.

Different games, different personalities. Samara, who credits boxing and yoga for elevating her game, finishes points emphatically at the net; Halle dictates the action from the baseline. Samara is quiet, serious; Halle is vocal, carefree.

Both will be a handful for No. 1 doubles foes.

“They’ll be good together, strong and difficult to beat, because their games are complementary,” says Giants co-coach John Whitehead, who will guide the varsity squad with co-coach Chris Visconti. “Samara is aggressive, focused, competitive. Not afraid to hit hard, go after it, go for winners. Her volleys are phenomenal. Already this month, during tryouts and drills, Samara’s leadership is apparent to her teammates; she shows leadership through her determination on the court.”

But there’s another side to Samara Michael, the serious netter and videographer.

Whitehead has seen it. Her teammates have seen it.

“Samara,” Whitehead says, “can be playful. Sure, she’s all about tennis when she’s competing, but it’s fun to be around her off the court. And she’s such a bright, bright girl.”

With no fewer than five AP courses to tackle this fall, academics will continue to be Michael’s priority in college. She had considered playing competitive tennis at the next level before deciding her involvement in the sport won’t go beyond club tennis in college as she pursues a path to a career in the video production field.

High on her list of colleges that interest her are the University of Southern California, Vanderbilt, Michigan, and Emory.

“I basically taught myself how to shoot videos, with help from YouTube,” says Michael, who taught tennis to students from the age of 4 to 70 at Northmoor Country Club in Highland Park this summer. “I used a GoPro camera for the first time in seventh grade and went from there. Last year, before our sectional meet, a father of one of my teammates gave me videos he had taken of our team’s matches during the regular season. I produced a video montage, set to music, and used it as a promo video to get students at school to come out and watch us compete. I’ve learned a lot since starting MemoVids, from marketing myself to the importance of working well with others.”

Her work with Halle, on one side of the net and in matches that count, begins soon—three years after the twins played together in a couple of varsity doubles matches.

“It’s going to be special, as well as exciting, the two of them playing as doubles partners in their final season as high school teammates,” Whitehead says. “I’m looking forward to seeing how they do against the state’s best doubles teams.”