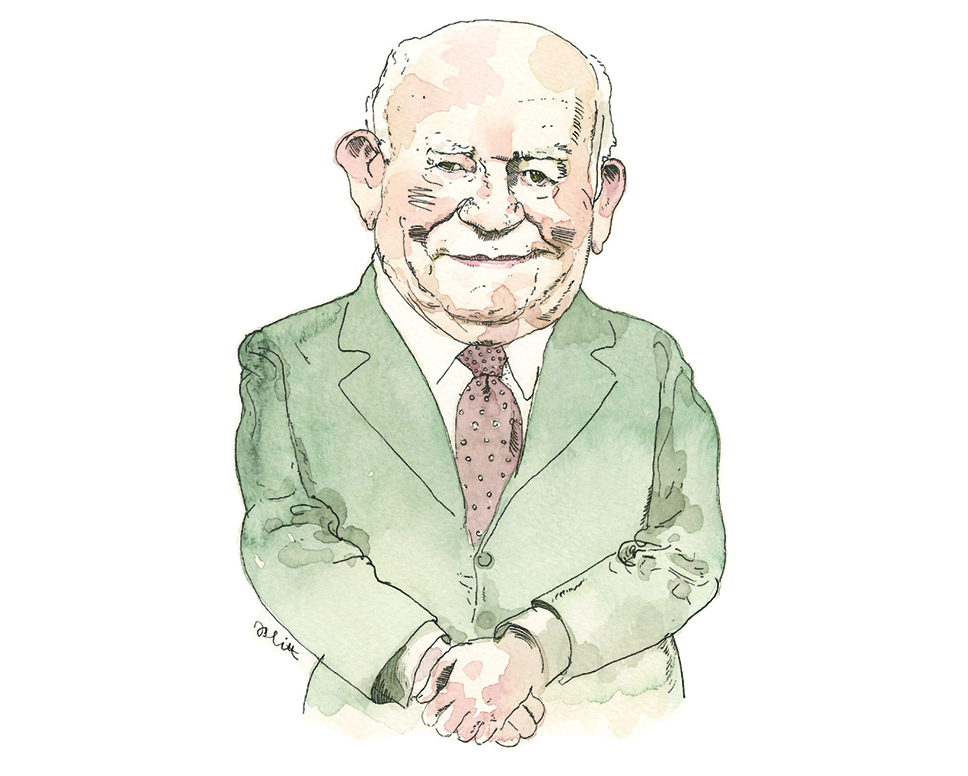 It’s almost 10 p.m. on a perfect Saturday night. Ed Asner, clad in the Hawaiian shirt, cargo shorts, and Dodgers cap he just wore in his comical one-man show, “A Man and His Prostate,” has launched into a soliloquy. Voice deepened, and face transformed, all vestiges of wise-ass Lou Grant or grouchy Karl Fredericksen vanish, replaced by the sonorous, serious Thomas Becket, a 12th century Archbishop of Canterbury, about to be martyred.

“Now is the meaning plain,” Asner intones. “The last temptation is the greatest treason, to do the right deed for the wrong reason…”

“It’s the only soliloquy I still retain,” he says, after. “The verse is gorgeous. Some of the most beautiful lines every written.”

More than pretty, those lines from T.S. Eliot were powerful, convincing Asner to make acting his career. A freshman at the University of Chicago, Asner was cast as Becket in Eliot’s play, Murder in the Cathedral, just prior to starting with Chicago’s Playwrights Theatre Club, early precursor to The Second City.

“From that night on, I knew I was destined to be an actor,” says Asner.

Back in town for two performances of his one-man show at Piven Theatre Workshop in Evanston on September 8 and 9, Asner is happy to talk about Chicago. “My time here with Playwrights was great,” he says, speaking of the two years of intensive roles that gave him the opportunity to perform in The Seagull, and many other plays. Asner took on Prospero in The Tempest, and acted in the Playwright’s production of Threepenny Opera, a connection that would open doors for him to be cast as Peachum in New York’s Off-Broadway revival of the play, and led to roles in television.

“But Chicago was a hard place to make a buck,” he adds, recalling jobs as a cab driver and phone salesman. “I wasn’t a very good cabbie. I didn’t hustle. If I didn’t have a fare, I’d just pull over into a cab stand to read plays.”

Asner was good at jobs with muscle—doing hard labor in the steel mills, and as a metal finisher at the Ford auto plant, “Probably because of all the time I spent busting up rocks at my father’s junkyard,” he says.

Morris Asner’s junkyard, secondhand store, and family’s apartment, were on the west side bottoms of Kansas City where Ed spent his earliest years. Morris drove a horse-drawn cart, collecting flotsam from the stockyards and packing plants. Besides working, and playing in the junkyard, Ed enjoyed going through the books, and glossies his dad brought home to sell in the shop.

“I loved to read, history especially, and some of the books were really great,” says Ed. “An illustrated copy of Davy Crockett and the Alamo—I loved that. And an Alexander Pope translation of The Iliad that came in with gilt-edged, totally unspotted pages, handbound in Moroccan leather. I still have it.”

Asner’s parents were Orthodox Jews, which meant Ed spent years in Hebrew school, emerging with a deep knowledge of Jewish history (and an impressive Hebrew vocabulary) but it also made him a minority. “I was in one of fewer than 100 orthodox Jewish families in a city of 120,000,” he says. To fit in socially, Ed initially took to clowning. “Dropping my books, going for the laugh,” he remembers. “But I knew that wouldn’t get me in to the high school fraternities my friends were in, so, I decided to apply myself, to excel academically.”

Ed hit the books, joined the football team, and started writing and performing radio sketches that aired on KCKM radio. He also signed on with the school’s newspaper, becoming the editor his senior year. The staff was led by a teacher named Corcoran–a man Ed still calls his best mentor.

“If there was a man I wanted to be, it was him,” says Asner. “His ego wasn’t paramount. he had good psychology, was sincerely interested in people, but wouldn’t take any crap from you. And he was a great teacher. He wanted you to learn the art.”

Asner seriously considered a career in journalism, “because it’s writing about history in the making. And I think history is the prime ingredient in anything I do in life,” he says. But acting won out. “It was really the only thing I was good for.”

At 89, the list of roles Asner has played and received awards for is longer than Thomas Becket’s soliloquy. He’s got more than 100 television credits to his name, and has starred in roles on stage, in film and as a voice actor. He’s won more Emmys than any other male actor—five for his work as Lou Grant, and two for dramatic roles in TV mini-series. And he’s been a president of the Screen Actors Guild.

Of all the parts that he’s played, the one that resonated with Asner the most was that of Axel Jordache in the miniseries Rich Man, Poor Man. “I adored that role,” he says. “Axel was an immigrant as my parents were. He had done unspeakable things to stay alive, but he was a man who had a soul. A good soul. As originally written, the character was regarded as a beast. But in the TV version of the book, there are two scenes that humanized Axel for me. In one, as Axel, I go to my son’s teacher to talk about him, and the teacher gets ugly and slaps me. I slap her back. I did that for my son. And then later, I travel to make sure he’s not prosecuted and gets his freedom. Those two things showed me Axel’s soul.”

Asner has a lot of acting still to do. After 60 years in the business he’s vowed to keep at it, “until I keel over.”

This year, he’s traveling the country with two shows. The one-man “A Man and his Prostate,” was written by nine-time Emmy and Peabody Award winner Ed Weinberger, about his experiences fighting prostate cancer. The other show, “God Help Us,” in which Asner plays God, features an ensemble cast and was written by Phil Proctor, and Samuel Joseph Warner—collaborator on Asner’s forthcoming autobiography.

“Well there is one I’ll tell you,” Asner smiles.“When I was a kid,my best friends were two Mexican kids, Tony and Bonaire. At the time, there was this kid named Nicky at school who used to bully me, and Tony was my protector. He said to me, ‘Don’t let Nicky do that to you!’ and showed me how to stand up to him. So the next time Nicky came at me, I got in his face and shouted, ‘You can’t do that to me!’

And it worked! The bully backed down.” Fierce as ever, Asner’s still up in America’s face—fighting the bullies, both as an actor and as an activist. He supports such causes as aiding Holocaust survivors, and acting as an advisor to the Rosenberg Fund for Children, which benefits children of political activists. It’s the legacy of a living legend, one we are still watching, listening to, and learning from. So don’t stand down, Ed. We’re right there with you, with applause.

Don’t miss the chance to see Asner perform “A Man and His Prostate” September 8 and 9 at Piven Theater Workshop. For tickets go to boxoffice.diamondticketing.com/piven/events.