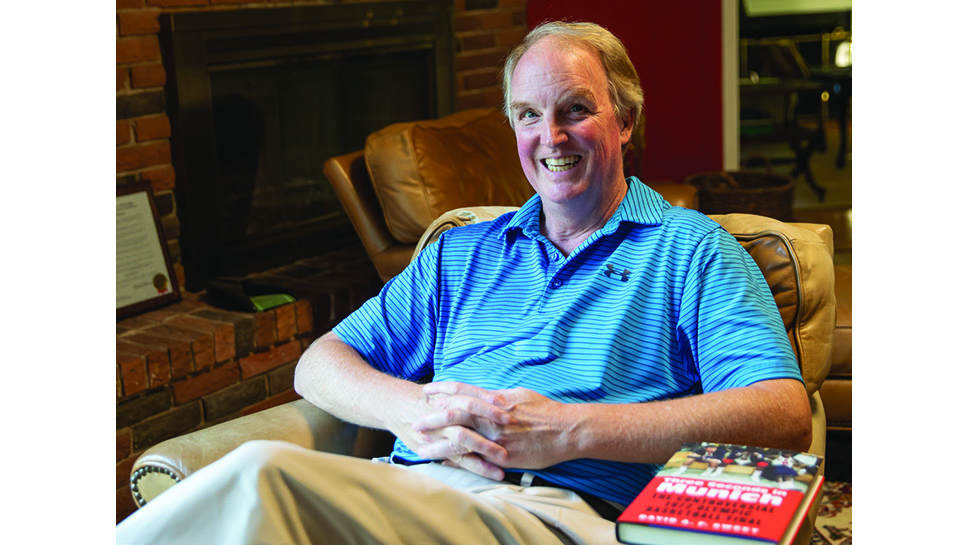 Their son David, during his formative years in Lake Forest, often welcomed Phil home from work—but only after digging for the afternoon edition of a daily newspaper in Phil’s briefcase.

“Both were huge readers,” David Sweet says of his late parents. Mr. and Mrs. Sweet consumed every page of the book Lamar Hunt: The Gentle Giant who Revolutionized Professional Sports in 2010 (Triumph Books, 256 pages).

David Sweet, now 56 and a former managing editor of North Shore publications, has authored a second sports book, and he dedicated it to his parents. Three Seconds in Munich: The Controversial 1972 Olympic Basketball Final (University of Nebraska Press, 2019) revisits the chaos and the confounding actions of officials and the chief of an international association at the end of Team USA’s 51-50 loss to Team USSR in the men’s basketball gold-medal game. Rules weren’t fol- lowed.

Sweet also vividly captures the horror that USA center Tommy Burleson endured on the eve of the USA-Italy semifinal in Germany. A West German guard pressed the barrel of his gun against Burleson’s head as Burleson heard Israeli athletes walking and sobbing in a parking garage.

The athletes would be among the 11 killed by Palestinian terrorists.

“Encountering the evil of terrorism and suffering an excruciating, unjust championship loss in only a four-day span—a sad and searing way for innocence to be shorn—shaped them then and continues to influence them today,”Sweet writes of Team USA’s amateurs, who had seemingly won their country’s eighth straight Olympic gold medal in men’s basketball and then refused to accept their silver medals after the Soviets had secured the stunning triumph on a buzzer- beating basket.

Sweet, who returned to Lake Forest in 2003 and lives there with his wife, Tricia, and theirchildren (Hannah, 16, David, 15, and Ford, 12), first thought about writing about the contentious result eight to 10 years ago.

Book publishers received his pitch and tossed it back with one of two reasons for the rejection: “Books about Olympics never sell. It’s too depressing of a subject.”
But Sweet kept chucking, kept hoping for a taker, and University of Nebraska Press gave him the green light. It took him two years to complete the book—while also working, full-time, as a writer for a company in the Willis Tower.

“I love researching and interviewing and writing,” says Sweet, who majored in English at Denison University and got his degree in journalism at the University of Southern California. “I could do all of that all day, especially when it involves a topic that interests me. Think about what those U.S. players gave up in 1972. They gave up an Olympic medal. It’s a young athlete’s dream, isn’t it, to earn such a medal? But all 12 of the players took a stand and didn’t want to validate the outcome of the game by showing up at the ceremony to receive silver medals.”

Two of the players—team captain and guard Kenny Davis and guard Tom Henderson—made sure none of their descendants will ever see the silver prize. It says so in their wills.

Sweet, a meticulous researcher with a lucid writing style, traveled to Kentucky to interview Davis, who loved basketball so much as a youngster that he’d often bounce a basketball while riding his bike. Davis attended the funeral of his father, Clyde, in Monticello, Kentucky, before returning to his home in Paint Lick to field questions from Sweet.

“Tough day for Kenny,” recalls Sweet, who interviewed eight of Team USA’s players for the book.

“I suggested we reschedule our meeting, but he agreed to see me as we had originally planned. Such a good, humble man. His wife, Rita, didn’t even know Kenny had served Team USA as captain until he was interviewed after the gold-medal controversy.”

Today, nearly 50 years after the gut-wrenching conclusion of a game that began at 11:45 p.m. in Munich, the 70-year-old Davis still can’t listen to a certain song of allegiance stateside without also feeling sorrowful.

“I never hear a national anthem being played without thinking that something was taken away from us,” Davis tells Sweet. “I couldn’t imagine the cold chills that would have run down my neck on the podium as they played the anthem and the flag was raised. I look back and think that was one of things we were cheated out of—hearing our national anthem.”

Sweet was a teen when he attended a Winter Olympics game in 1980. This one was staged in Lake Placid, New York, USA versus … USSR. Same matchup, different sport. The medal-round game in men’s hockey would become the “Miracle on Ice” game. The Americans struck for two goals in the third period in their stunning 4-3 victory.

Sitting next to Sweet in the 8,500-seat arena was his father, who couldn’t wait to read all about thewin in newspapers the next morning.

“It was special,” David Sweet says of the oppor-tunity to witness a game that “offered scintillating drama and streams of tears.”

Sweet was 9 when future Philadelphia 76ers guard and Chicago Bulls head coach Doug Collins, as well as future Bulls assistant coach Johnny Bach, represented Team USA’s men’s basketball team in Munich. Collins, 68, is a senior advisor with the Bulls; Bach, one of coach Hank Iba’s Team USA assistants in ’72, died in 2016 at the age of 91.

Sweet did not watch the USA-USSR men’s basketball gold-medal game on television 47 years ago.

“So why write a book about it?” he asks in the Three Seconds in Munich introduction.

Because, he explains, the 1972 Olympic basketball championship “possessed those qualities of that hockey game between upstart U.S. collegians and the USSR hockey juggernaut—along with time moving backward, as if God had intervened, what appears to be subterfuge to end a 36-year undefeated streak and, finally, an historic refutation by 12 angry men of perhaps the most coveted item in all of sports: an Olympic medal.”

To purchase a signed copy of David A.F. Sweet’s book, Three Seconds in Munich: The Controversial 1972 Olympic Basketball Final, contact the author at [email protected] The book will be available September 1 at Lake Forest Book Store and at amazon.com.