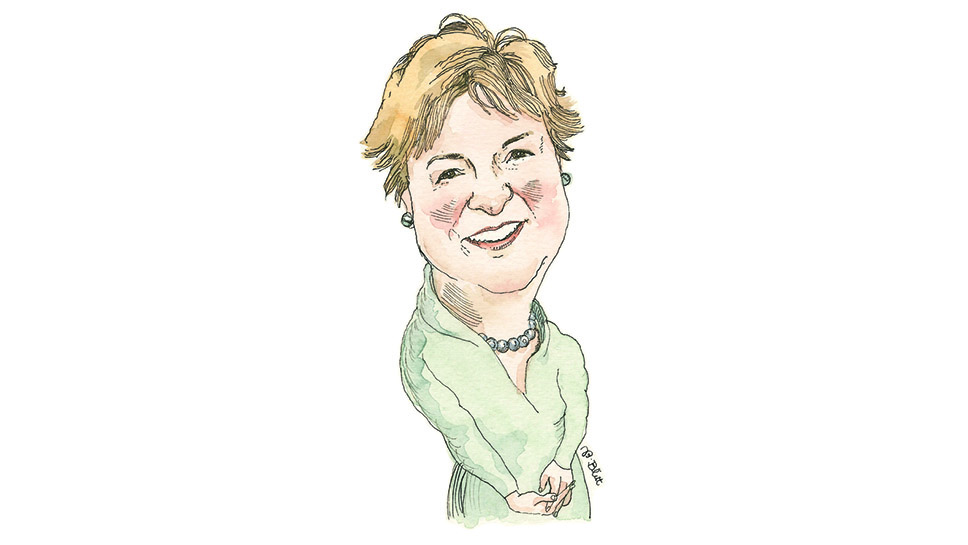 Toting a cake she had baked at home for a despondent youngster, Linda Burner enters the juvenile detention center in St. Charles. The volunteer from Naperville clears her throat. Soon it will be time to sing.

That cake isn’t just a cake.

The despondent youngster turns into a delighted youngster at the sight of the treat and during the first few notes of Burner’s rendition of “Happy Birthday to You.”

Burner would slice pieces and sing for another center occupant on another birthday. And another.

And leave quite an impression on her daughter Susan.

“She was funny, vivacious, and she loved people,” Susan Resko says of her mother, who died in 2009 at the age of 70. “Always happy, too, with so many friends. I thought that was just great and incredibly thoughtful, the time she spent to be there for kids who were lonely and must have felt unloved on their birthdays.

“My mother,” adds the Kenilworth resident, “wanted to show them that somebody cared about them.”

Resko, 56, cares deeply about The Josselyn Center in Northfield, about her selfless colleagues, about the center’s dedicated medical personnel, and about the 1,400 low- and middle-income residents it serves.The president of the nonprofit mental health services organization since 2015, she oversees a safe and welcoming space that provides compassionate, quality, and affordable care.

The Josselyn Center—established in 1951 and located in Northfield since 1969—is the only Medicaid provider of outpatient psychiatric services in a 375-square-mile region.

There’s a perception that all residents of Chicago’s northern suburbs are affluent. The reality: 1 in 6 residents in the leafy, picturesque towns and villages lives in poverty.

“I love what our amazing clinicians are doing to help people, and we’ve been able to expand our programming, thanks to a wonderful team effort and the commitment of people who felt strongly that the Josselyn Center needed to thrive in order to continue to be a part of this community’s safety net,” says Resko, who—via her effective leadership and innovative strategies—helped resuscitate a center on life support after state funding had essentially been reduced to a pittance for nonprof- its because of the Illinois state budget impasse from mid-2015 to mid-2017.

The Josselyn Center’s recent $3 million campaign soared north of that figure. A portion of the infusion of capital has been earmarked to renovate the center’s aging facility; a second Josselyn Center building, located behind the primary structure on Central Avenue, was purchased last year.

The Living Room—a comfortable, therapeutic alternative to emergency-room care, staffed by the center’s peer specialists—re-opened. Josselyn Center also houses a drop-in center, an art therapy room, and a space for tele-psychiatry, allowing patients access to a screen that connects them to offsite psychiatrists.

A math classroom at Miami University in Ohio was the setting for Susan’s first interaction with her future husband, Mike. Susan, a Naperville North High School graduate and finance major, sat in front of Mike in the class- room. Each was a freshman. They dated in college. They got married after college and raised three children.

The university officially classified the couple as one of its “Miami Mergers.”

“We get a Valentine’s Day card from the school every year,” says Susan, who earned a master’s degree in marketing at Northwestern University’s Kellogg School of Management and landed several high- ranking positions in the fields of change and relationship management before accepting the call to guide and enliven the Josselyn Center four years ago. “My husband is a rock of a person, loyal and faithful, and he’s a huge sports fan. He taught me how to play golf.”

But Susan Resko wants local residents to give their drivers and irons a rest and swim, bike, and run instead on September 15 at the North Shore Triathlon, which will be staged at Gillson Park in Wil- mette and presented by Evanston- based Precision Multisport. Money raised—up to $25,000—to support triathlon teams participating in the Josselyn Center’s “Try our Tri Challenge” will be matched by a generous North Shore triathlete. “We want to increase awareness that there is a powerful connection between physical activity and mental health,” Resko says, adding the Josselyn Center’s fall benefit at Ravinia Festival November 16 will feature speaker Crane Kenney, the Chicago Cubs’ president of business operations.

There’s a good chance Kenney will compare the Cubs’ resurgence near the middle of this decade to the Josselyn Center’s revitalization at around the same time.

“I’m a right-down-the-middle type of person at work, a person who likes to create a culture that’s both serious and fun at our center,” Resko says. “We’re about bringing people together, people who are willing to be their best for those who need assistance. One man we served came to us after the deaths of a couple of family members. He was depressed. He told us he wanted to become a teacher. People sometimes lose their jobs because of mental illness, but working can be therapeutic for people struggling with such an illness.

“That man got a job as a teacher’s aide, after first working as a school bus driver,” she adds.“We helped him get back on his feet.”

Resko and her cohorts prop children up, too. Children make up a third of Josselyn Center’s clients. The center partners with the Youth Services of Glenview to run Camp Neeka, a six-week therapeutic summer day camp. Led by trained professionals, it emphasizes team building, self-control, and positivity.

The camp’s environment wraps its warm arms around the children in a variety of ways and paves journeys to social and emotional growth.