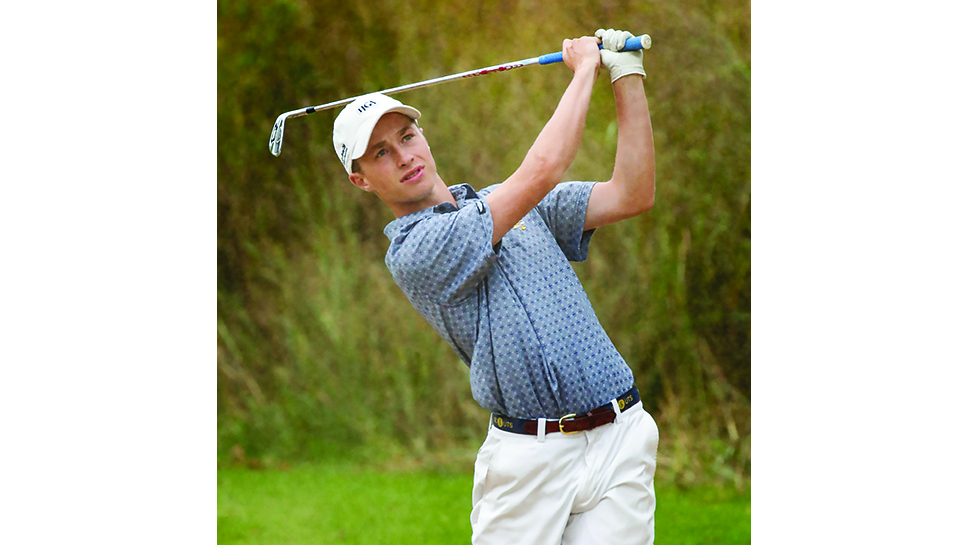 On the car ride home from Miami University in Oxford, Ohio last summer, Lake Forest High School golfer Danny Fisher stared out the window from the back seat for most of the 310-mile trip with his parents, Chris and Lesley.

He was as loquacious as a mime.

“I didn’t say a word,” Fisher recalls more than a year later. “Too disappointed.”

Miami men’s golf coach Zac Zedrick had informed Fisher of the partial scholarship—the Red- Hawks’ only Class of 2019 scholarship available— he offered to an Australian prospect.

The Aussie hadn’t accepted it, hadn’t turned it down.

That left Fisher in a state of limbo.

And not just while he and his parents motored across the ample state of Indiana.

“Miami was my dream school, and one of my other dreams was to play Division I golf at Miami,” Fisher adds.

But Fisher refused to sulk and didn’t let the tough news chip away at his strong golf game last summer. The 5-foot-10, 140-pounder reached the semifinal round of the highly competitive Chick Evans Junior Amateur at Itasca Country Club shortly after returning from Oxford, Ohio. He also continued to hone his skills against top-notch peers and collegians at Merit Club in Libertyville and work closely with both swing coach Chris Oehlerking and mindfulness conditioning coach Dr. Arthur Hoffman at The Golf Practice, a teaching academy in Highland Park.

A spot on the men’s golf team at Miami was available because that guy from “down under” had decided to shoot for under-par rounds at Arkansas State University.

“It’s your spot if you want it,”Zedrick told Fisher.

“Mind if I have 48 hours to think about it?” Fisher asked Zedrick, who played scholarship golf at Michigan State University.

The coach Okayed the request.
Fisher didn’t need 48 hours.
“I called him the next day and accepted the offer,”

Fisher, sporting a sand-trap wide smile, recounts. “I can’t wait to get there and get started. Red bricks are everywhere; it’s a gorgeous campus, a pretty special school. It’s year-round golf in college. It’ll be rigid and intense and structured, with 6:30 a.m. workouts. We’ll play Big Ten schools, and the team is scheduled for a trip to the Bahamas in early November.

“I’ll have a ton of motivation to do well.”

Those two words sum up Fisher’s performance at last month’s Chick Evans Junior Amateur. After shooting rounds of 69 and 70 to secure the No. 1 seed for match play at Itasca’s par-72 layout, Fisher recorded seven birdies in a bogey-free, 3-and-1 defeat of Chicagoan Samuel Mortell in the final round.

One month earlier, at the Illinois Junior Amateur held at Makray Memorial Golf Club in Barrington, Fisher paced another talent-packed field after rounds of 70 and 74 before settling for sixth place with a 54-hole total of 224.

“Danny had a pretty solid senior season,” says Erik Luedeking, another recent LFHS graduate, a varsity teammate of Fisher, and Fisher’s caddy at three tournaments this summer. “He’s now a lot more consistent, and he cleaned up his short game. I like his swing, his mental strength, his demeanor— he doesn’t get down in a round and he’s always in a good mood. Before the Chick Evans, Danny had the confidence to get it done, win that thing, and that’s exactly what he did.”

What made Fisher’s recent golf success sweeter was the way he responded to a rough stretch of golf in June. He had lost a valuable, trustworthy friend: his swing.

“Awful, I was awful,” Fisher says of his efforts at Ohio State University’s Scarlet Course and at the Western Junior at Rich Harvest Farms in Sugar Grove. “I had no idea where my shots were going. I got together with my swing coach after the Western Junior and told him, ‘Something has to change.’ ”

The Scout who helped LFHS to fourth-place and runner-up finishes at the last two Class 3A state tournaments returned to his “safety” swing.

Or, in the words of Oehlerking, “his Plan B.”

“We talk about having that for your swing in case you need it during a round,” says Oehlerking, Fisher’s swing coach for five years and a co-owner at The Golf Practice.“We also talk about the progression of competing, of developing skills. I like how Danny’s mind works, in addition to his discipline and athleticism. He’s a quiet kid with confidence. He uses mindfulness techniques to deal effectively with adversity.

“It’s critical for competitive golfers to be able to calm themselves and stay in the present moment,” he adds.

Fisher’s path to competitive golf began with a lesson on the driving range at Briarwood Country Club in Deerfield. He was 8, as well as a soccer player, a baseball player, and a basketball player. His first golf instructor was his grandfather, the late Stuart Gimbel.

“My grandfather was an avid golfer,” Fisher says. “I wasn’t sure about golf; I didn’t get into it right away. But my father thought I should pursue it because he liked my swing.”

Some four years later, Fisher entered a nine-hole tournament at Sportsman’s Country Club in Northbrook. He carded a first-place 40.

“I thought to myself, ‘Huh, I won something,’ ” says Fisher, whose twin, Elon University-bound Jake, started at point guard for the LFHS varsity basketball team last winter, and sister, rising LFHS junior Molly, helped the girls’ hoops squad reach a Class 4A supersectional game in February.

Danny Fisher eventually squatted more often to read greens than to receive fastballs and curveballs behind home plate. Hooked. A Fisher was hooked on golf.The former Lake Forest Baseball Association catcher caught fire on the par-71 Golf Club of Illinois course in Algonquin in April 2018, shooting a career-best 66 to top the field at a 36-hole tourney. Fisher had won another sanctioned tournament earlier in the month, with a 72-69 at Sanctuary Golf Course in New Lenox.

“As a golfer, the last thing you want to think, or accept, is, ‘OK, I plateaued,” says Fisher, who will enroll in Miami’s Farmer School of Business and would like nothing more than to have a stint on a professional golf tour delay his business career. “Pursue perfection—that’s what golfers do, endlessly.”

Oehlerking occasionally calls Fisher to get updates on his golf game, on his life off the courses. It’s what caring swing coaches do.

“When I call him, Danny asks me how I’m doing,” Oehlerking says. “Can you believe that? He has this wonderful awareness about things around him, about people around him. He’s respectful and very considerate of others. He’s genuinely interested in others. I find that pretty unique for someone his age.”