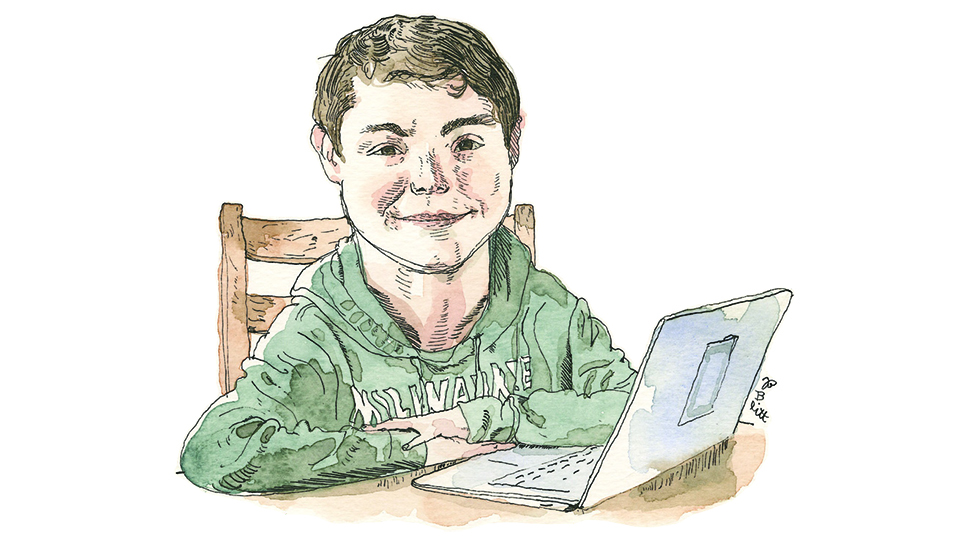 A few minutes into my Sunday meeting with Highland Park High School (HPHS) junior Zander Bush, he’s already intrigued me with a story both quirky, and inspiring. The story begins simply enough, with a third-grade Bush going with his mom to the Bradley Center to see the Houston Rockets play the Milwaukee Bucks. But that day, Bucks forward John Henson was signing autographs. The experience of seeing the game and meeting Henson not only wowed Zander and made him a Bucks fan, but also put him on the path to becoming a skilled sports writer and social media influencer.

The 16-year-old now operates two Instagram accounts (@bucksball and @giantsbball,) and his own website sportstag.org. He also provides the content for @anklebreaker, a basketball page with more than 70,000 followers.

“The Bucks and Rockets game was my first time attending a basketball game in person,” recalls Bush, dark-haired and slight, meeting me for the interview in a Milwaukee Bucks hoody. “I’d already been watching basketball, although I didn’t have a specific team that I was following, and I didn’t yet know all of the players. When they announced that Henson would be signing autographs, I was really excited because he had had a great rookie year. And it was really cool to stand in front of him. He’s six-feet-eleven inches tall, and sitting down, he was taller than I was standing.”

Once back at home, Bush’s interest in the Bucks and professional basketball grew. He bought and played NBA video games, watched ESPN, and over time, cued in to news from the Bleacher Report, beat writers, and fan pages.

The idea to launch @bucksball, an Instagram account for Milwaukee Bucks fans, was born on the school bus.

“I’d been thinking about it for a while,” says Bush. “Most of the national coverage on basketball focused on bigger market teams—overlooking teams like the Bucks, which at the time were smaller market even though they had a lot of promise. “

Also, of the existing basketball coverage, most was on Twitter— which to Bush seemed a more adult-focused outlet.

“I thought Instagram seemed more targeted for a younger audience,” he says.

And so, sitting on that bus, Bush launched @bucksball. For his first posts, Zander says he didn’t know how to edit or caption or engage an audience. But he quickly learned.

“I got the photos from Twitter or Google, editing them myself on Photoshop. And I started keeping notifications on all the time for the best basketball information sources,” he says.

Along the way, Bush learned the ins and outs of social media—including the best times to post to ensure the biggest audience and best engagement. He also learned that by asking questions in his posts, more people would respond to them with comments. This past year, Zander began thinking about analytics, trying different looks and content for his posts. He even started asking followers what they liked and didn’t like.

That all built a loyal following, but once the NBA playoffs started, Bush’s numbers really jumped.

“This past season, the Bucks finished with the best record in the NBA. As a result, the number people following @bucksball jumped from 6,000 to 15,400,” he says. “And even though they lost the Eastern Conference Championship to the Toronto Raptors, followers didn’t drop off.”

Beyond the visual and metric skills required to cultivate a following, Bush’s interest in sports writing also deepened. As he got to know others with fan pages and sports sites, he was asked to begin writing sports articles. Bush did that for one client, but eventually decided to start his own site, which has given him the opportunity to broaden his coverage beyond the Bucks.

“I really like engaging with the Bucks fans, but wanted to engage with fans from all sports—NBA, NFL, NCAA basketball and football, MLB, and some tennis,” he says.Bush writes many of the articles for sportstag.org, and hires others to write for the site as well. In addition, running @anklebreaker (an Instagram page featuring basketball highlights owned by @AceMedia) puts Zander in touch with another 70,000 followers.

Not just a sports spectator and analyst, Bush played varsity tennis during his freshman year at HPHS. He loved playing the sport, but realized the aspect he liked best was the team camaraderie. In fact, connecting people and encouraging team spirit and exchanges between fans is something Bush likes so much, he recently decided to create an Instagram account to post news about the HPHS basketball team, the Giants. Called @gianstbball, the account celebrates game days, and posts final scores for the games, plus photos and “Player of the Week” features.

Bush approached team coach Paul Harris last fall to ask if he could create @giantsbball to give students a new way to support and connect with the team. Coach Harris was not only enthusiastic, but invited Bush to travel on the bus to games, and included him in team events. He’s also always guaranteed good views for taking photographs of the team in action.

“Before @giantsbball, there was little info on the team out there,”says Bush.“Since it started,I’ve gotten a lot of feedback from people that they like having a place they can go for all this. It’s also been really nice for alumnae, who now have a way to stay updated.”

Looking ahead, Zander says his long-term goal is to go to Marquette University to take his sports writing to the next level.

“Ultimately?” he sums, “I’d love to run a professional sports team’s social media.That would be incredible.”