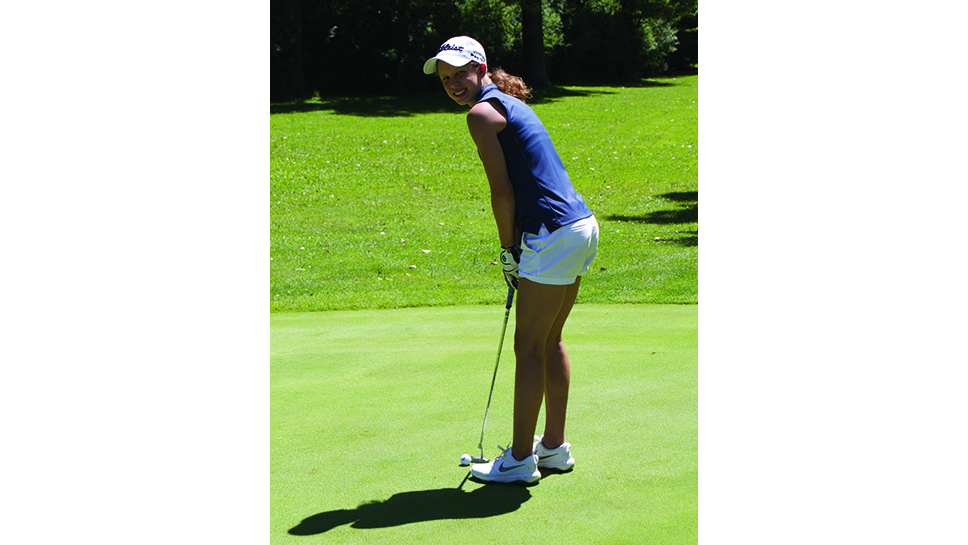 CS INFIELDER: Courtney Schumacher, who will be a sophomore at New Trier High School this fall, became the first female in school history to earn a spot on a baseball team at NTHS. She played second base for the Trevians’ freshman squad last spring. One of the multisport athlete’s goals is to play NCAA Division I women’s hockey. PHOTOGRAPH SUBMITTED BY THE SCHUMACHER FAMILY

It’s a school night inside the Schumacher house in Winnetka. Courtney Schumacher—who might hold the world record for most sports and physi- cal activities tried before the age of 15—is about to do push-ups in her room.

She had completed sets of pull-ups in the same space.

As she nears the floor at the start of her first push-up, the 5-foot-7 daughter of Bill and Allison Schumacher nears an open textbook. Or maybe it’s a sheet of paper filled with math problems.

Her thinking: Why only strengthen your arms when you can exercise your mind and complete homework assignments at the same time?

Allison Schumacher has caught her daughter— a sophomore-to-be at New Trier High School— multitasking in such a manner more than once, and you can’t help but picture the proud mother shaking her head and smiling at the same time. A Courtney Schumacher who isn’t climbing something or throwing a ball against a wall or juggling three bocce balls or trying a new water-ski trick or honing her hockey skills is a sound-asleep Courtney Schumacher.

“I’m determined in everything I do,” says a resolute Schumacher, who, at New Trier, plays golf, hockey, and baseball—yes, baseball, a sport played by only boys at the school from early last century until Schumacher made both the freshman squad and school history as a second baseman last spring. “I just want to play sports, work hard to get better in the sport I’m playing at the time, and do well in sports.”

Schumacher, who’s as humble as she is athletic and hopes to play NCAA Division I women’s hockey, competed in basketball, soccer, and tennis before enrolling at NTHS. She has played vol- leyball with friends, loves to swat shots in badminton every now and then, soars and flips atop a trampoline in the Schumacher backyard, and she would never turn down the opportunity—her packed schedule permitting—to battle in a game of Ultimate (formerly known as Ultimate Frisbee).

“A tennis pro at Midtown Athletic Club in Chicago saw Courtney play tennis, and I’m sure she would have liked Courtney to stick with tennis and develop in that sport, but she gave me the best advice,” Allison Schumacher recalls. “This tennis pro told me, ‘Let your daughter play the sports she loves to play, and don’t let a coach in any other sport tell you anything else.’ I appreciated hearing that. It’s exactly what we’re letting Courtney do.”

One of the questions Courtney has been asked since she started playing competitive baseball in the NT feeder program three springs ago continues to be,“Why not play softball with girls instead?”

Courtney’s straight-from-the-heart reply: “I love baseball, have for years, and baseball is different.”

Schumacher shared playing time at second base under NT freshman baseball coach Brian Loring last spring. A line-drive hitter, she typically batted No. 5 or No. 6 in the order and was always a threat to steal a base. Her quick hands and sharp eye-hand coordination allowed her to turn slick double plays.

Schumacher competed last weekend for the U18 Windy City Huskies, an all-girls baseball team, at the Baseball For All Tournament in Rockford.

“I watched her play catcher in baseball, when she was in middle school,” says Glencoe resident Margot Norehad, a good friend and a teammate of Schumacher on Chicago Mission AAA and North Shore Warhawks hockey teams.“Courtney is fearless. I am so proud of her for making the New Trier baseball team. The stuff she does off the ice, or off the field, to improve as an athlete is amazing. Her skills and speed are amazing, too. We love to be active when we’re together. We refuse to be people who sit on couches forever and do nothing. I just took a break from a bike ride to talk to you about Courtney.”

Schumacher’s most thrilling athletic ride of her life, to date?

Her debut as an American Ninja Warrior Junior competitor last fall. The demands of the competition’s obstacle course—Archer Steps, Tic Toc Pendulum, and Floating Shelf Grab, to name a few—intrigued her. She then trained for three months at Ultimate Ninjas Libertyville. Schum- acher applied online for a spot in the inaugural American Ninja Warrior Junior field by submitting videos of her athletic prowess. She flew to Cali- fornia with her mother and landed a Final Four slot in her age group (13-14). The competition aired on the station Universal Kids in October.

Schumacher lost to a boy in each of her two highly competitive one-on-one races. But each victor had entered the event with almost as much experience in American Ninja Warrior tests as Schumacher had accrued in hockey games.

“Courtney puts in the time, the extra time, away from the rink,”says Michael Glass,Schumacher’s Winnetka Warriors U12 hockey coach. “And the time she devotes to working hard on her game shows in her play. Great athlete, terrific kid, never quits. She keeps her feet moving, usually to the point of exhaustion.”

Schumacher, back in her third-grade days when she lived in Chicago, walked from one house to another on Halloween dressed as former St. Louis Cardinals slugger Albert Pujols, now with the Los Angeles Angels. She and her mother, a St. Louis native, had attended St. Louis’ Game 7 defeat of Texas in the 2011 World Series.

Schumacher has seen the baseball movie A League of Their Own at least five times.

But golf is on her mind these days. The sixth- place finisher at the Central Suburban League South JV golf tournament last fall, Schumacher— whose father is a single-digit handicap golfer— shoots for a varsity nod at NTHS tryouts later this month.