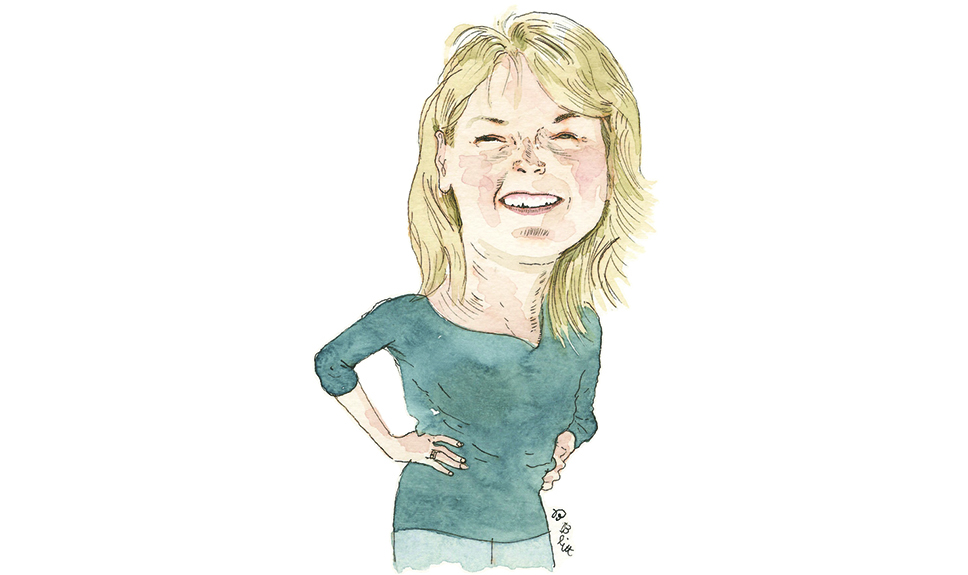 A few minutes into our conversation one summer morning in Lake Bluff ‚Äôs Scranton Alley, Forever Om owner Cilla Stoll demonstrated that she practices what she teaches.

We were talking about the anniversary of the yoga studio she opened a decade ago, what it means and what she will do to celebrate, when out of nowhere, I caught her taking a long, deep, cleansing breath.

‚ÄúI just found out that I have a serious maintenance issue I have to deal with, and that a crane and a roof might somehow be involved,‚Äù she says with a slight edge in her voice. ‚ÄúIt‚Äôs a good thing I practice yoga!‚Äù

But with a single exhale later, Stoll was present again‚Äîin the moment and ready to reflect on the yoga community she‚Äôs built.

‚ÄúI started practicing yoga years and years ago when I was playing lots of tennis and doing triathlons,‚Äù she says. ‚ÄúI was always getting injured and needed yoga to help my body heal and get stronger. I found that the more I did, the more energized I became.‚Äù

So energized, in fact, that wanted to open a studio of her own. Her husband Ryan seconded that motion and Forever Om was born.
‚ÄúI had no preconceived ideas of what the studio could be,‚Äù Stoll adds. ‚ÄúForever Om tookon a personality all of its own. It grew and morphed into this beautiful thing that I didn‚Äôt know it could be.‚Äù

Before opening her studio, Stoll admits to being painfully shy. ‚ÄúAs part of practicing yoga, I realized how much ego was fueling my shyness,‚Äù she explains. ‚ÄúI had to push through this. I had to move past what had been comfortable for me. After studying and practicing yoga for thousands of hours in order to own my studio, I knew that I also had to be a teacher. I couldn‚Äôt be who I wanted to be by being afraid to step in front of a class.‚Äù

Not only did Stoll overcome her fears and become a full-fledged teacher, she has also become a teacher of yoga teachers. Today,it‚Äôs important to Stoll and the Forever Om brand‚Äîwith locations in both Lake Forest and Vernon Hills‚Äîthat teachers lead classes the same way.

‚ÄúI want our community to know that everything we do has an intentionality behind it,‚Äù she says. ‚ÄúThe way we begin our classes, how we cue our poses, the words we use, and what we do to connect with our students. There is thought behind everything we do.‚Äù

While there is no set choreography for how a teacher leads a class at Forever Om, there is a simple template that all teachers use in leading classes.

‚ÄúAll of our teachers know the same poses, but how they use them will be totally different. There is a bell curve to every class‚Äîwhether it is a hot power class or not. My hope is that teachers will take their cue on what pose to move to next by what they see when they look at a body.When we do teacher training and I ask a student why they picked a certain pose and they don‚Äôt know, that‚Äôs not an answer. But if I ask the same question and they say that pose spoke to them in some way from what they saw‚Äîthat‚Äôs what I want to hear. That‚Äôs a teacher connecting with her class.‚Äù

It‚Äôs impressive that the typically Zen-filled Stoll can take such a hard stance when she needs to because it seems so counter to her more relaxed personality.

‚ÄúI knew when I opened the studio that I was going to have to switch between being a teacher and being a business owner,‚Äù she says. ‚ÄúI find that it‚Äôs easy for me to flip that switch.‚Äù

Even with her daughter Kelsey‚Äîa popular Forever Om instructor and owner of her own retreat business, Compass Hiking and Yoga‚ÄîStoll needs to go back and forth between being her mother and being her boss.

‚ÄúIt‚Äôs just something I have to do. But I‚Äôm beyond blessed with our amazing group of teachers who believe in what I believe and for our students who walk through our doors every day.‚Äù

You will never hear Stoll complain about her responsibilities at Forever Om because what once began as an entrepreneurial endeavor is now part of her journey as a yogi and as a compassionate human.

‚ÄúI completely believe that we can change the world with the energy we send out into the universe,‚Äù she says with a smile. ‚ÄúIf we can put kindness out into the world, we will change it. And if Forever Om can be a little part of making this happen, even better.‚Äù