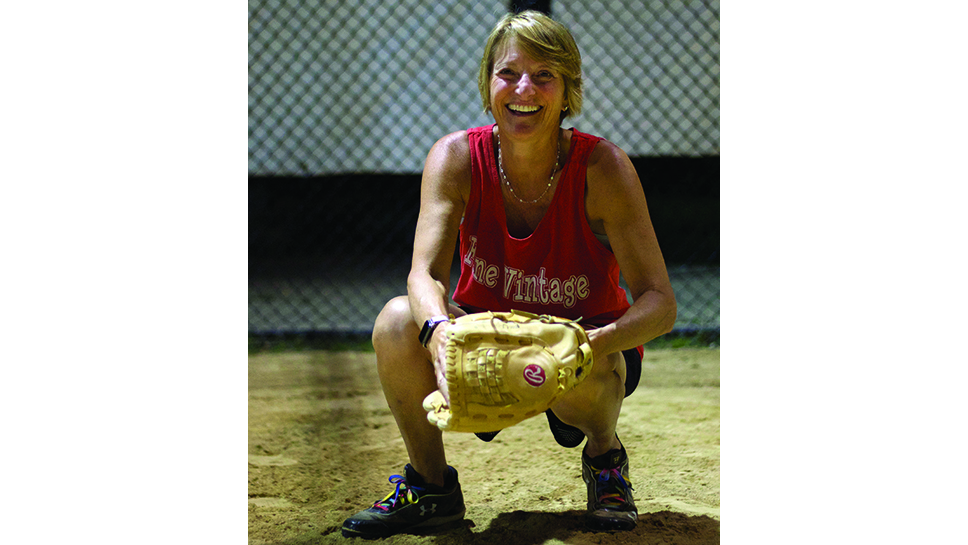 Laughter fills the air from an outside table at Buffo’s in Highwood.

The highly contagious sounds—produced by six animated members of Fine Vintage, a women’s 14-inch softball team in a five-team league in Highland Park—mingle with the aromas wafting from pizza and french fries.

It’s a Tuesday night, or Game Night, for the merry diners. Fine Vintage, sponsored by Buffo’s, will play the Flashbacks at Sunset Woods Park in Highland Park in about an hour.

“We always look forward to competing on Tuesdays in the summer,” says Amy Young, an ace tennis player at Highland Park High School in the mid- 1970s and at age 60, Fine Vintage’s ace pitcher. “On Wednesdays, we hope to be able to walk normally.”

The line elicits chuckles at the table. Some of the players then reach for slices of pizza with cheese, green peppers, and mushrooms; others grab fries.

“This means a lot to me, means a lot to all of us,” says Fine Vintage catcher and Deerfield resident Susie “Cap’n Crouch” Blau, also 60. “Sure, some of us on the team are older, going up against much younger players in the league. But we’re fine with that. We love that challenge. We’re smart players, and we have fun every game.”

Four of Fine Vintage’s athletes—including battery mates Young and Blau—get to enjoy competing on diamonds with familiar faces: their daughters. 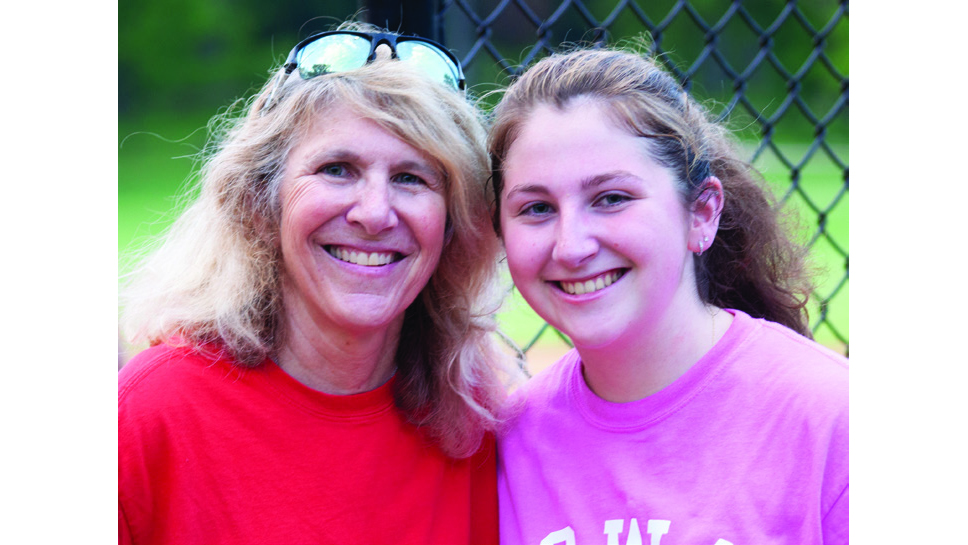 YOUNG AND YOUNGSTER: Highland Park native Amy Young (left) and her daughter, Erin Gilbert, are Fine Vintage softball teammates. Young, 60, played in her first league game 40 years ago; Gilbert, a sophomore-to-be at the University of Iowa, is in her second season with Fine Vintage. PHOTOGRAPHY BY BRAD LASH

None of the other teams in the league comes close to matching Fine Vintage’s number of DNA connections.

“I couldn’t wait to be old enough to play softball with my mother,” says Gilbert, who was an eager Fine Vintage bat girl and scorebook keeper for many seasons before turning 18—the required minimum age for league players—in 2018. “My first game, I was so nervous. I was scared I’d mess up.”

Gilbert, a left-handed hitter, would do just the opposite nearly two hours later against the Flash- backs on July 23, driving in the final two runs in the bottom of the sixth inning in Fine Vintage’s impressive 10-0 victory. Action in the scheduled seven-inning game was halted because of the 10-run mercy rule.

Gilbert’s mother was 20 years old and a University of Illinois student and tennis player when she received a phone call from Jan Ratliff, the wife of the late Bill Ratliff, a former tennis coach at HPHS. Jan had dialed to recruit Young to play softball for a local women’s team; the team name Fine Vintage— the brainchild of current player Joanne Biondi’s

“I was in awe of the players on the team, mostly because several of them were PE teachers at my highschool,”says Young, an under-level tennis coach at HPHS and DHS and a preschool teacher. “Another one of my teammates back then had been a cheerleader for the Chicago Bears. I couldn’t believe it, getting the opportunities to compete with women in their 40s. Forty was old to me at the time. Now, here I am, 60, and still playing softball. There’s no way I thought I’d play for as many years as I have.”

It’s the top of the fifth inning, with one out and Fine Vintage owning a 6-0 lead vs. the Flashbacks on July 23.

Young— who her proud daughter calls “the best pitcher in the league”—lofts a well-placed backspin pitch. The batter rips a sharp one-hop comebacker at Young, who calmly and cleanly fields the ball with her bare right hand, pivots smoothly, and fires another strike to first base for the second out.

The win ups Fine Vintage’s record to 4-6-1. Young had allowed only one hit, a single in the second inning. Alison Morgan, a tennis and paddle instructor at Birchwood Club in Highland Park, tripled home Fine Vintage’s first run; Niles West High School Athletics Hall of Fame inductee Shirley Katz made it a 2-0 game with a sacrifice fly in a four-run fourth inning; and Young knocked in her second run of the game with a single in the fifth.

Goldsher, a member of the women’s softball program at Rollins College the past two springs, batted third in the order for Fine Vintage on July 23. Other Fine Vintage members include: Sydney Levy, Hannah Matthews, Dar Rusch, and Sarah Spiro.

The clever, creative Roseth—the designer of Fine Vintage softball cards years ago, with a photo of each player on the front and individual statistics on the back—had the best walk-up song before each of her at-bats last summer. She chose The Beatles’ tune “When I’m 64.”

The playoffs start in early August, when Fine Vintage will attempt to capture its first league title since 2011. The team had amassed a slew of league championships between 1980-2010.

The league champion receives prize money. Fine Vintage spent all of its winnings on the team’s bash eight years ago.

But the primary rewards for playing softball with good, ageless friends have little to do with dollars and cents.

“My softball teammates today, I went to high school with many of them, kept in touch with them through college,” Young says.“We’ve been through so many wonderful life experiences together. Special, memorable experiences like weddings and the births of our children. Tough experiences, too, like deaths of parents. And we’re still playing softball, staying active, still having fun together. It’s neat. We’re close.”

Young and her teammates occasionally gather at Buffo’s for Monday Night Trivia. It never hurts to exercise the brain on Game Night Eve. Their trivia team nickname? It isn’t Fine Vintage.

It’s Sour Grapes. More evidence that no matter what their ages, these girls just want to have fun.