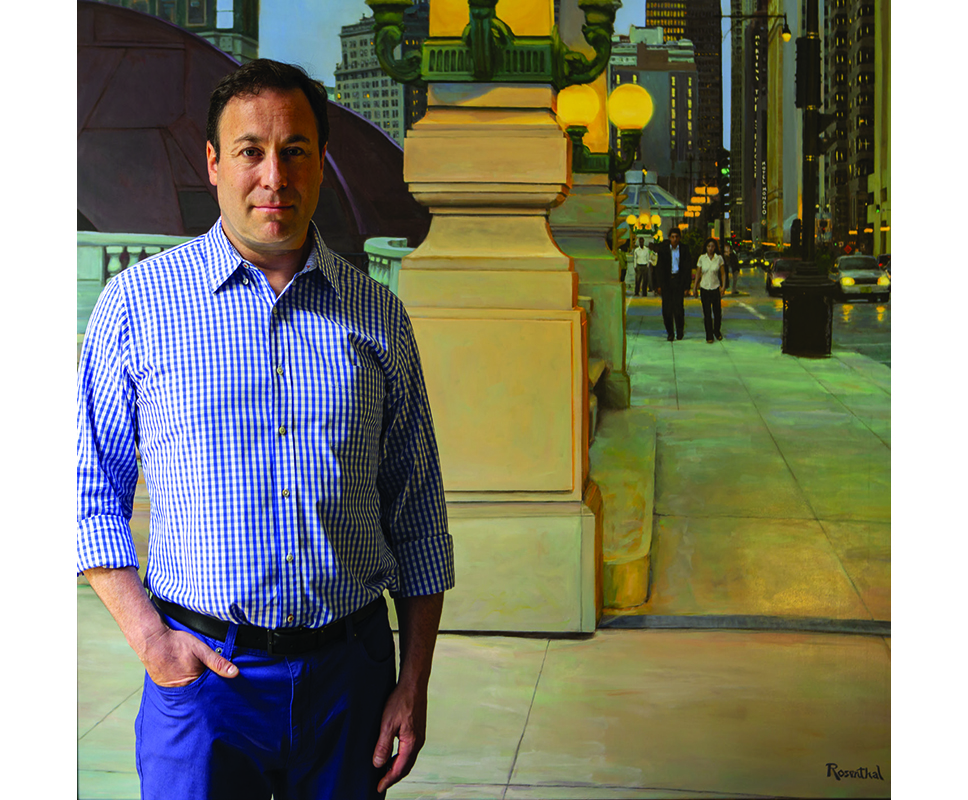 Sam Rosenthal of Lake Forest in front of his “Twilight on Wacker Drive” painting. PHOTOGRAPHY BY MONICA KASS ROGERS

We’ve all seen plein air artists at work, their easels pitched near lovely garden vistas, delicately painting miniature representations of the scenes at hand. But Lake Forest-based artist Sam Rosenthal takes this to a grand scale.

The “what” he’s doing just now, is capturing the interplay between natural and arti- ficial light, using his brush to apply dabs of oxide red and cadmium yellow—each visit to the location bringing him a little closer to finishing the work. When it’s finished, Rosenthal says the painting, still untitled, will be on display until March 25 at his one-man show at the Butler Institute of American Art in Youngstown, Ohio. The painting has been in progress for two months. But some of his works take much longer. 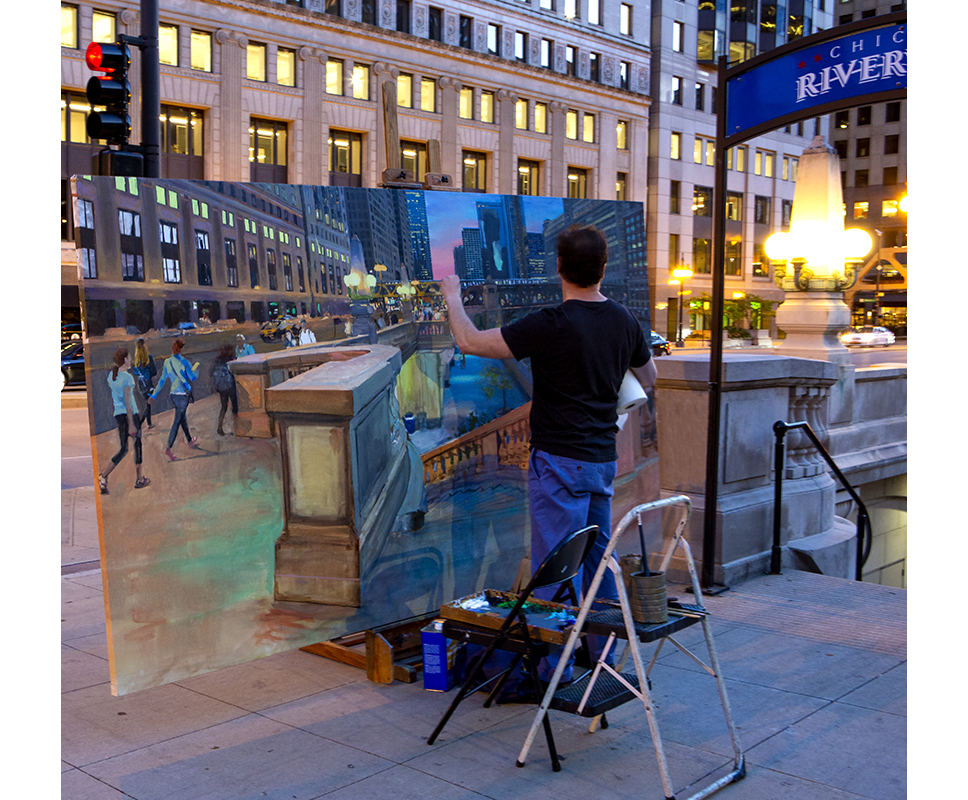 Sam Rosenthal, painting a city landscape on location at LaSalle and Wacker in downtown Chicago. PHOTOGRAPHY BY MONICA KASS ROGERS

City views are popular with Rosenthal’s clients who have commissioned him to do public works on display at institutions including the North- western Medicine Prentice Women’s Hospital, Northwestern Medicine Lake Forest Hospital, and even the Chicago Federal Reserve.

But Rosenthal’s work isn’t limited to urban landscapes. There are portraits such as “Funny Face,” and “Portrait of Ann Marie,” and still life paintings such as “Bowl of Peaches.” The year he was artist-in-residence at the Indiana Dunes, there were many peaceful, lakeside landscapes.

While Rosenthal’s work has been described as “immersive” and he is an impressionistic realist,he’s not bound to any specific technique.

Rosenthal grew up in Lake Bluff, the third son in a family of four brothers. As an infant, Sam contracted spinal meningitis, a serious illness that dealt a blow to his early verbal expression. But Rosenthal overcame this quickly, showing an interest in illustration and developing mad mathskills that had him at the gifted level by grade school. He started painting and drawing when he was a child, taking classes at the Art Institute of Chicago, and then the American Academy of Art.

After getting a BA from Washington University in St. Louis, Rosenthal kept painting, studying again at the American Academy of Art; Palette and Chisel Art Academy in Chicago; the Lyme Academy of Fine Arts in Lyme, Connecticut; and Bougie Studio in Minneapolis. He took a several year sojourn to Europe and Australia. He moved to Lake Forest with his family in 2015, establish- ing a private gallery, and has been busy painting ever since.

“People often go through their daily routines without noticing the beauty around them,” he
says, gesturing thoughtfully. “I’m doing my best to change that with my paintings. Beyond the
physical, I want to show a little of the drama, mystery and complexity that’s right there beneath.”