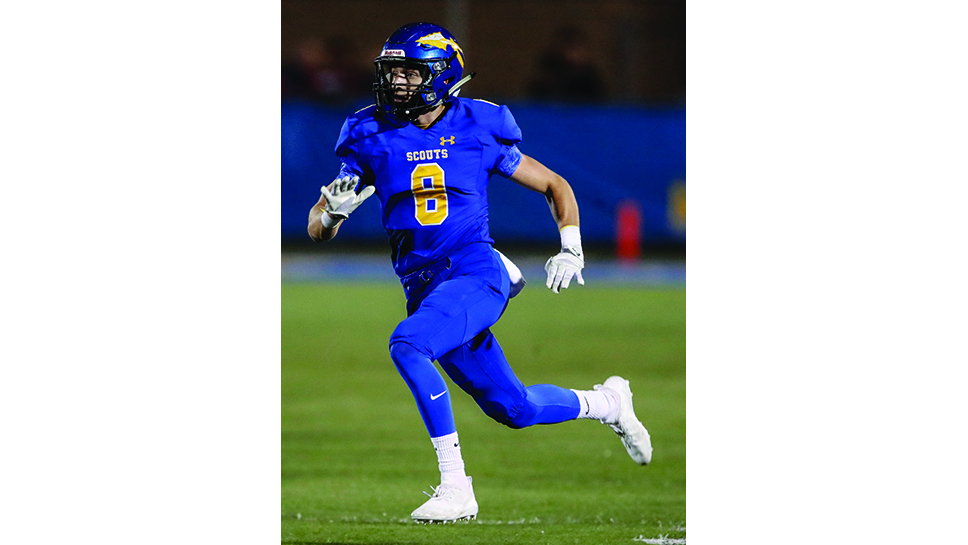 On one of the best days of his young life— March 19, 2019, when he found out the University of Notre Dame had accepted him for admission—Eddie Scheidler said good-bye to an old friend: organized football.

“I thought, ‘OK, that’s it,’” recalls Scheidler, a 2019 Lake Forest High School graduate and starting defensive back for the Scouts in the 2017 and 2018 seasons.“Time to hang up my football cleats. I was going to play flag football at Notre Dame.”

But that plan changed abruptly later in the spring. The series of events that led to his status as a preferred walk-on football player at Notre Dame began when Scheidler went to retrieve his lunch in a locker room at school but got stymied because the doors were locked.

The hungry teen then searched for LFHS football coach Chuck Spagnoli, also a member of the Technology Education/Wellness Department at LFHS. Surely the coach would have a key to the locker room.

“My coach,” Scheidler recounts, “was in a classroom, talking with Tommy Rees.”

LFHS and ND football fans know all about Rees, the former LFHS star quarterback who holds the career record for passing completion percentage among ND quarterbacks. Rees, who played for the Fighting Irish from 2010-2013, now serves as ND’s quarterbacks coach under head coach Brian Kelly.

“Coach Spagnoli knew how much I loved Notre Dame and Notre Dame football, and he introduced me to Tommy in the classroom,” says Scheidler, whose parents, Ed and Ann Marie, are ND graduates. Eddie’s sister Grace—one of his four siblings—will be a sophomore economics major in South Bend this fall.

Scheidler and Rees talked in Spagnoli’s classroom. Rees encouraged Scheidler to get in touch with Dave Peloquin, Notre Dame football’s director of player personnel. Scheidler, an all-North Suburban Conference selectee after his senior season, sent game film of his highlights to Peloquin.

“Never did go back for that lunch,” Scheidler cracks. “In the middle of May, Mr. Peloquin called me and told me, ‘You can go to bed knowing your roster spot is secure.’That was such great news to hear. Part of me has a hard time believing I’ll have the opportunity, if all goes well, to suit up and stand along a football sideline as a preferred walk-on during Notre Dame home games. Another part of me thinks I’ll be on a field at Lake Forest High School next month, getting ready for a fifth season of prep football.”

In the meantime, the 5-foot-11, 170-pound Scheidler continues to work gobs of hours as a does-a-little-bit-of-everything shop boy in the Onwentsia Club golf shop and lift weights practically every day with University of Pennsylvania-bound Chase Bahr, a 6-4, 290-pound offensive lineman who co-captained the Scouts’ varsity squad and earned all-NSC honors last fall.

“Penn sent Chase a summer workout program,so I’m doing the best I can to keep up with him while following that program,” Scheidler says, adding their lifting sessions take place at Lake Forest College’s Sports Center. “It’s not easy; I’m half the size of Chase.”

But the smaller of the pair—a hard-hitting tackler with speed and experience at the cornerback and safety positions—reached a big milestone in the weight room earlier this month. Scheidler bench-pressed 225 pounds for the first time.

Not once. Not twice. But three times in a row.

“Eddie,” Bahr says, “had been struggling to lift that amount of weight all summer. He was getting frustrated. But he did it and got excited after doing it. I was excited for him. Eddie, one of my best friends, is an extremely hard worker, always has been, and he loves to grind. The guy works all those hours at Onwentsia and then heads to the weight room for another two or three hours. He loves to do whatever he can to become a better player.”

They conversed for nearly 45 minutes.

“As a freshman, he was small, just like I am,” says Scheidler, who intends to major in business with a focus on either marketing or finance. “Chris was great, very helpful, during our phone call, and I was less nervous after it. I asked him a lot, including,‘What should I be doing during workouts this summer to make sure I’m ready?’ He also told me what it’s like to be a preferred walk-on and what to expect when I arrive on campus.”

Scheidler dealt with anxious thoughts for most of the day on March 19. Ann Marie wondered if her son wanted to be at home when he found out—via a message, delivered to his phone—if Notre Dame had either accepted him or denied him admission.

Eddie Scheidler wanted to be alone.

“I was working out at the Lake Forest Rec Center on that day,” he recalls. “It was one of my worst workouts. It was close to 5 p.m., and I kept refreshing the admissions status portal. Finally, I read the decision—the great news. I drove home, with the windows down and the Kool & The Gang song ‘Celebration’ blasting.”

Scheidler parked his car in the Scheidler driveway but didn’t get out of it until he had gathered himself.

Eddie broke the “sorrowful” news to Ann Marie in the kitchen. He sobbed and stammered and wailed about his fate—all while burying his head in his shirt. Later, when he saw how distraught his mom was, he slid his phone across the kitchen island.

Ann Marie stopped the phone, picked it up, and read the super news from Notre Dame.

Mom beamed. So did Eddie.