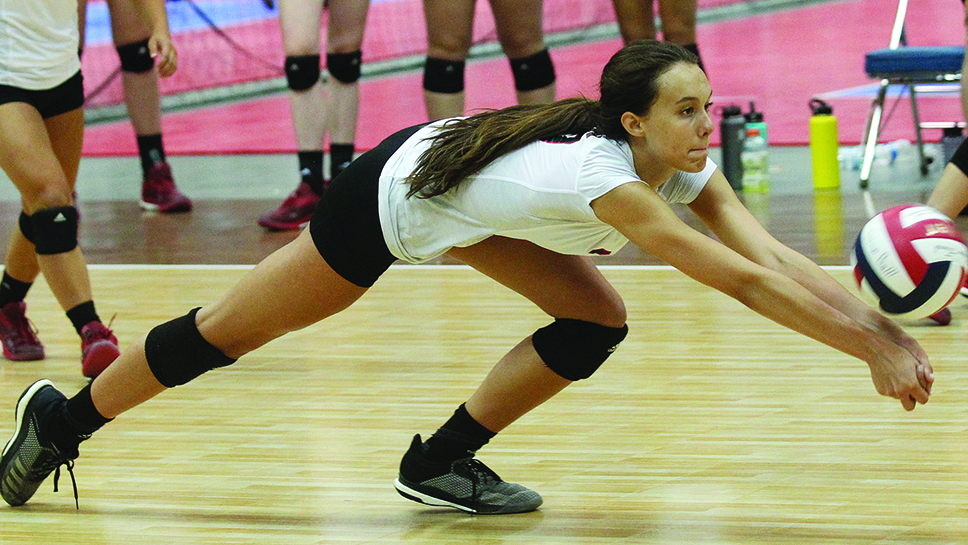 Paddleboarding is among Caroline Graham’s favorite escapes from volleyball.

The Lake Forest High School junior-to-be—a 6-foot-1 outside hitter and standout front-row force for the Sky High 16-1’s North Shore club team—negotiates her way atop bodies of water either near her home in Lake Forest or during visits to the home of grandparents Bill and Gretchen in Door County, Wisconsin.

“Sometimes,” Graham says, “I’m on a paddle- board with two others. It’s not always easy, staying on the board when we’re out there. At times all three of us have fallen into the water.”

But on land, specifically on and off volleyball courts, Graham has found that enviable balance of being aggressive and highly competitive in matches—all while maintaining her humble and kind nature around two sets of teammates, friends and family, and peers at school.

“Teammates have asked me,‘Why don’t you talk about your volleyball success more?’”says Graham, who paced 16-1’s North Shore squad in kills and helped it finish in 18th place in the Bronze division at the USA Volleyball Junior Girls National Championships in Indianapolis earlier this month.“That’s just not me, talking about myself. I play as much for my teammates as I do for myself. Yes, I want the ball, always want the chance to attack and win the point for my team, but what drives me is toget better as a player for my teammates. I also enjoy working with my teammates toward the same goals.”

Show kindness toward others—that’s what her parents, Steve and Sara Graham, have urged Caroline and her twin, Katherine, to demonstrate in all settings.

It isn’t unusual for Caroline Graham to blast a resounding winner on match point and then find the time to listen to a good friend or praise a teammate’s efforts minutes later.

There’s an ‘I’, but not an ego, in Caroline Graham.

“Nice and really sweet,” Lake Zurich High School rising junior and 16-1’s North Shore team- mate Morgan Davis says of Graham, an all-North Suburban Conference Honorable Mention selectee last fall. “I liked her right away, on the day I met her two years ago during Sky High tryouts. She’s one of my best friends, absolutely hilarious. Humble, too, without a mean bone in her body. And she’s a phenomenal all-around player for us, our go-to in the front row. An amazing hitter, an accurate passer, Caroline also has a crazy-good topspin serve.”

Born in St. Louis, Caroline and her family moved from Portland to Lake Forest before Caroline and Katherine, a right-side hitter, entered the fifth grade at The School of St. Mary. Caroline

had attended golf camps in Oregon because her father was, and still is, an avid golfer.

“My dad, I think, suggested I give volleyball a try in the third grade, after I had participated in golf camps,” Graham says. “I remember enjoying volleyball almost immediately, though my sister and I didn’t like the club volleyball experience in Portland because all of the other players on the team were older than we were.”

The twins competed as seasoned veterans for The School of St. Mary fifth-grade volleyball team in 2013; all the other spikers were first-year competitors back then.

Caroline Graham, a former Sky High 13 Purple club player, battled for the LFHS sophomore team, as a middle hitter, in her freshman year and made the Scouts’ varsity crew in 2018, when she shifted to a six-rotation outside hitter. The Ultra Ankle Junior Volleyball Association named Graham to its 2019 Watch List, and coaches f rom 12 Division I college volleyball programs have shown interest in her 4.95 GPA, volleyball abilities, and leadership traits. She and Davis, also an outside hitter, served as 16-1’s North Shore co-captains in the 60-match 2018-19 club season.

“Smart kid, with a very good approach. She’s un- stoppable when she’s ripping down-the-line shots. Dominant. Her confidence, as it grows, will make her even more of a dominant player. Her consistency and overall game are impressive. Caroline pushes herself, truly wants to improve, and, as a coach, you couldn’t ask for more than that.

“It’s been fun for me, watching her learn and develop as an athlete,” adds the coach, in his 25th year at Sky High. “Her next two years—in high school and club volleyball—will be special ones.”

Graham attended girls’ volleyball camp at LFHS on July 15, a day after returning from a well-de- served family vacation in Door County.The camp concludes on July 25.

The Scouts, seeded 10th in the Class 4A Gray- slake Central Sectional last year, lost to Mundelein High School’s eighth-seeded Mustangs in a re- gional semifinal. LFHS lost six of the 16 varsity players to graduation in 2019; the Graham twins and libero/outside hitter Kelly McCaskey collected varsity letters as sophomores.

Who knows? Maybe you’ll see that trio sometime this summer, laughing and adeptly navigating a paddleboard without tumbling into Lake Michigan.