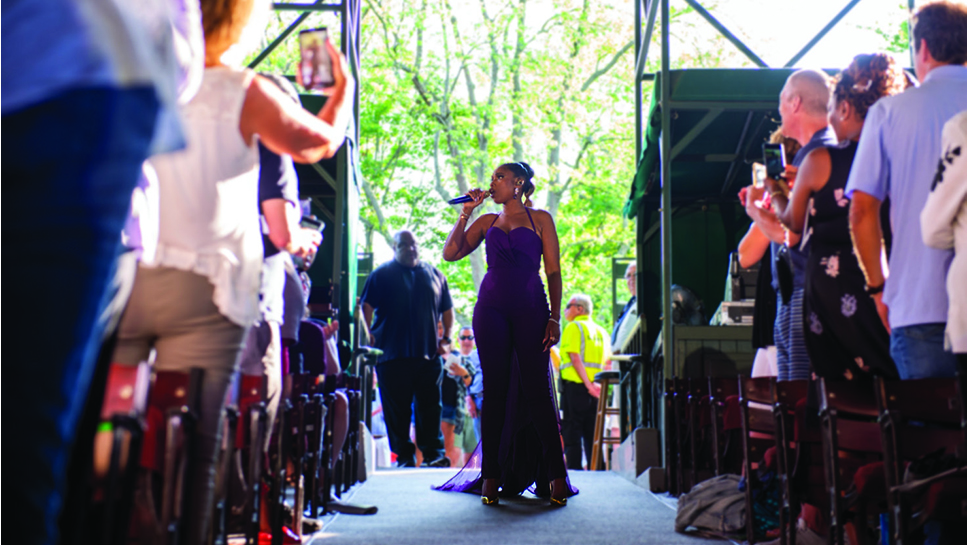 The temperature was sultry, the air was calm, and Jennifer Hudson—Chicago’s own Oscar-and Grammy-winning performer—dramatically began her Chicago Symphony Orchestra concert fundraiser at the back of the Ravinia Pavilion on Sunday, July 14, with a deep, soulful rendition of “How Great Thou Art.”

Dressed in purple (a hue that matched both the gala invitations and the party décor) Hudson followed that compelling opening by walking the stage for the Ravinia Women’s Board’s annual Gala Benefit Evening—shaking hands with audience members every step of the way. Met with thunderous ovations, her set featured tributes to Prince and Whitney Houston and included her big song from her Oscar-winning role in Dreamgirls, “And I Am Telling You I’m Not Going.” Hudson, who made her Ravinia debut in 2011, will soon sing the Andrew Lloyd Webber classic “Memory” as Grizabella in the film adaptation of the Broadway mainstay Cats as well as star in the big-screen biopic Respect about Aretha Franklin, whose final full concert occurred at Ravinia in 2017.

“There was a raw excitement when Ravinia first introduced Jennifer Hudson to our audiences in 2011, and for tonight’s gala we welcomed back a masterful artist in full control of her adoring audi-ence and her phenomenal talents,” says Ravinia President and CEO Welz Kauffman of Highland Park, who booked this gala and all Ravinia concerts.

“As she said onstage, Jennifer often comes to Ravinia as an audience member to watch our headliners perform, and it’s that love of music that makes her connect so beautifully with an audience. This was an event people will be talking about for years.”

Nearly 800 guests attended the black-tie-optional gala, which grossed more than $1.1 million, making it one of the most successful in the 53-year history of the concert fundraiser—the only event Ravinia puts on for itself each year. Proceeds support the festival and its Reach Teach Play education program. George Hanson, who had served an assistant to Leonard Bernstein, conducted the CSO for the July 14 concert.

Hudson’s knockout concert was followed with cocktails on Ravinia’s famous Lawn. A sumptuous three-course dinner catered by Food for Thought followed, featuring an appetizer “Summer Trio” of melon gazpacho, heirloom tomato panzanella, and marinated gulf shrimp on an avocado purée and criolla salad; followed by Chermoula-rubbed sea bass and whole roasted beef tenderloin over charred sweet corn, summer beans, and new potato cassoulet; with a lavender opera cake for dessert. The party was held in an 80×220-foot tent (accompanied by a 20×110-foot food- prep area) erected over a seven-day period just for the occasion. The jewel-tone design, populated by oversized Chihuly-like flowers, was created by Kehoe Designs. The concert was also open to the public and broadcast on a 48×56-foot LED video screen on Ravinia’s Lawn.

The concert was sponsored in memory of Keene H. Addington II. The Chairman of Ravinia’s Board of Trustees, Jennifer Steans of Chicago, thanked the Women’s Board for more than 50 years of dedication as the nonprofit festival’s greatest financial supporter.

It was Ravinia’s Women’s Board that initiated Ravinia’s education programs more than four decades ago, and the all-volunteer board remains the largest supporter of Reach Teach Play, which now serves more than 85,000 people each year. It features such programs as the pioneering Jazz Scholars, which identifies the best high-school jazz musicians and teams them with seasoned professionals to create study groups and working ensembles that perform real gigs, and Sistema Ravinia, which creates orchestras for elementary schools in Cook and Lake Counties without music programs of their own by providing the instruments, teachers, and curriculum.

A short video that played before the gala concert told the story of how one such school, Catalyst Circle Rock, recently named its new public performance space the Sistema Ravinia Auditorium in recognition of the festival’s long-term investment in the Austin neighborhood.

“Work begins on a Ravinia gala almost the day after the current one ends, so it’s wonderfully gratifying to see guests enjoying every beat of such a complicated evening, and know that not only are they having the time of their lives, but that they are giving other people throughout Chicagoland a chance to be touched by music in an equally moving way,” Vender says. “I’ve watched the children in our Reach Teach Play programs grow. They aren’t just learning about music; they are learning self-esteem and how to take a leading role in society.

There’s no better feeling in the world than knowing you contributed to that growth in some small way. All of our gala guests can share in that sense of pride.”

For more information about this program or the remainder of Ravinia’s 2019 season, visit ravinia.org.