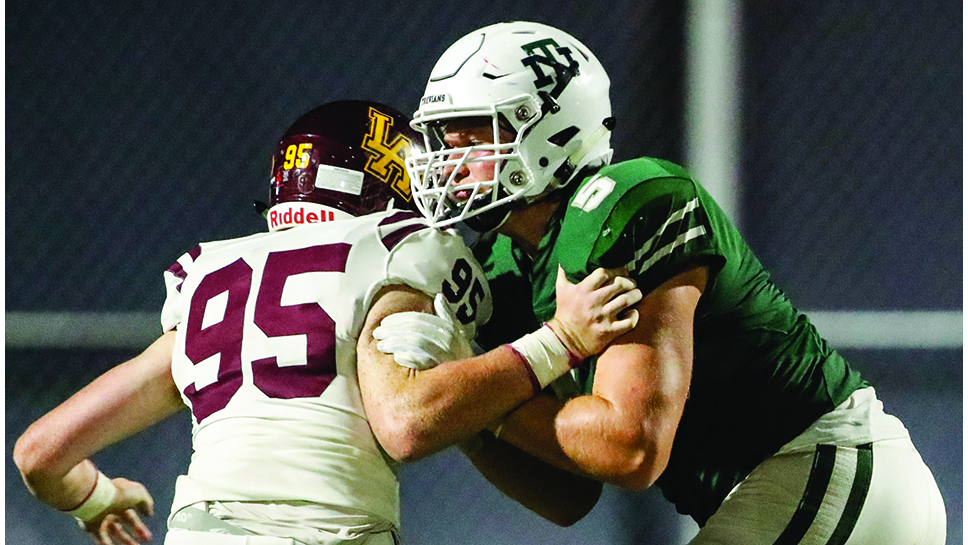 NOT SO FAST: Duke Olges (right), seen here blocking a Loyola Academy pass rusher in a New Trier High School football game last fall, will suit up for Northwestern, which has won three straight bowl games. Olges finished with 102 tackles and five sacks for the Trevians in the 2018 season. PHOTOGRAPHY BY JOEL LERNER

Big-time college football coaches didn’t care that Duke hadn’t played football for many years. You don’t see nearly 300-pound football players move around a field the way he does. No wonder coaches saw film of him and were quick to say, ‘We want him.’

“I observed others in that cafeteria for about an hour,” recalls Olges, who’s also taking an NU philosophy course this summer and intends to major in economics. “I had to make sure nobody noticed I was there just to watch; I didn’t want to make anybody feel uncomfortable. I observed, I reflected, and then I came to conclusions based on what I saw.”

Olges, remarkably, hadn’t seen action in an organized football game until his freshman year. The Winnetka resident was a baseball player from the time he could hold a bat, mashing monstrous homers for youth squads at a scary-good clip. He also was a karate enthusiast, having earned fifth-degree black belt status in Shotokan in his early teens.

“My first tackling drill, in the summer football camp before my freshman season, I was terrible,” Olges, a varsity baseball player at NTHS in 2018 and ’19, admits. “But I was also lucky. My coaches pushed me, encouraged me. I was raw, super raw, and the opportunity to be aggressive in a sport excited me. My coaches did all they could to maximize my potential.”

At New Trier football games, he towered over all the other players. “It never took me long to spot Duke on the field,” Pelinski adds. “No. 5 was his jersey number. Nobody at games ever had to wonder, ‘Where’s No. 5?’”

Olges stood out in karate circles, too. He was 3, maybe 4, when he was introduced to the discipline. Had he not stuck with it for 12 years, transitioning to football as late as he did might have been too daunting of a task to complete.

“Karate, without a doubt, helped me as a football player, had the biggest impact,” says Olges, who also lined up as a tight end in his Trevians career. “It developed my balance, my focus, my coordination. I became physically and mentally tougher because of my karate years. To be an effective defensive lineman you have to be good at hand fighting, and I had years of experience with hand fighting through karate.”

A captain for a Class 8A playoff team last fall, Olges finished with 102 tackles, 69 of the solo variety. The disruptive force also recorded five sacks, 15 tackles for loss, 15 quarterback hurries, and four pass deflections. Olges also burned teams from the other side of the ball after lining up in a vacated left-tackle spot, churning for 30- and 40-yard gains on catch-and-run plays against Evanston Township and Niles North high schools, respectively.

Olges displayed his impressive speed in NT’s baseball opener against Lane Tech this past spring. The designated hitter/first baseman had drawn a walk before stealing second base, easily, via a head- first slide. But he suffered a dislocated left shoulder at the end of the slide and underwent surgery in June.

The defensive tackle recruit will sit out the 2019 season at NU—winners of three straight bowl games—as a medical redshirt.

“I’m OK with that,” says Olges, the eldest son of Scott and NTHS graduate Mary, a pair who met at the University of Missouri and graduated together as MBA students at the University of Chicago. “It will give me more time to get stronger and be fully ready for D-I football. I’m excited about playing for Pat Fitzgerald, a players’ coach with a winner’s edge and mentality. He cares. Everybody loves Coach Fitz. The program buy-in for me was super easy, and the new football facilities there are amazing.”

The size of his freshman class at New Trier stunned him in the fall of 2015. Olges was only a 6-foot,190-pounder then, one of 1,000 or so fresh faces at the school’s Northfieldcampus.

“Totally overwhelming at first,” he recalls, adding the number of students at the middle school he’d attended was around 200. “There I was, part of a huge cluster of people. It was such a different atmosphere. But I got used to it.”

Did he ever. In the classroom. And on the football field. Anybody could see that.