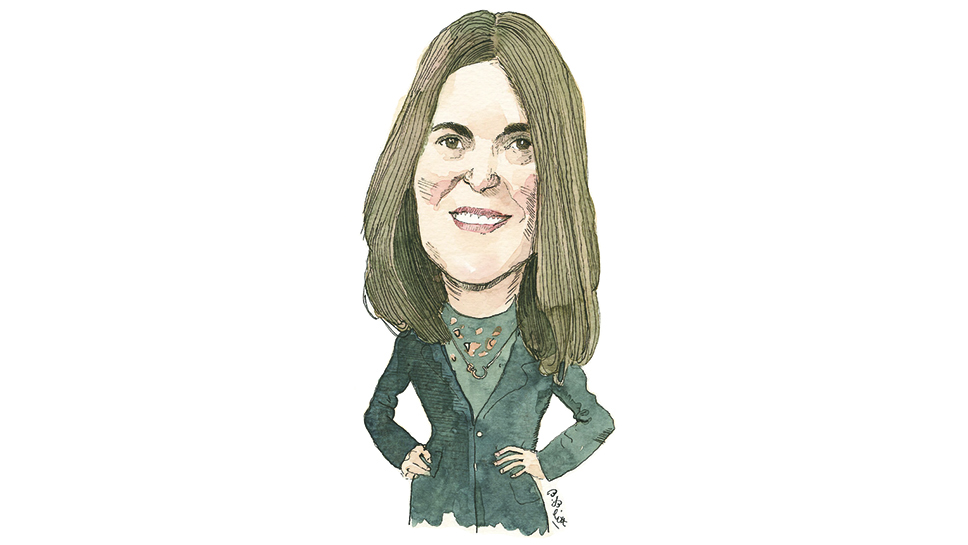 When school board members of Township High School District 113 in Highland Park meet to discuss strategic plans, policies that govern the district, or any of the other initiatives necessary to make the education in the district the best that it can be, Elizabeth Garlovsky is very pleased to facilitate. First elected to the board in 2017, voted in as president in 2018, and again in 2019, Garlovsky, a probate and estate planning attorney and mom of three, is a big believer in public education. She’s especially a champion of the Deerfield and Highland Park High School District.

“Education has always been very important to my family,” she says. “My grandfather, Ben Palmer, was an Illinois State Senator and he sponsored legislation that created the Illinois Lottery, which was originally drafted as a vehicle to pay for the educational system in Illinois. I wasn’t interested in serving politically, like he did, but when an opportunity to be on the school board came up, that interested me. My husband and I have had great experiences sending our children through the district. And I wanted to give back to the community.”

Garlovsky has always taken education very seriously. Her father, a urologist who now works for the Captain James A. Lovell Federal Health Care Center in North Chicago, and her mother, a longtime real estate agent, always instilled in their children the importance of education in finding the path to be everything they could be.

For Garlovsky, who came from a family full of lawyers—not only State Senator Palmer, but one uncle who was an Assistant Public Defender for Cook County, and another who is aretired Appellate Court Justice—the inspiration to be an attorney was there from a very young age.

“I was 12 when I decided I wanted to be a lawyer,” she says. “We talked about law all of the time. And from the start, I was very drawn to the people-driven aspect of the law, the opportunity to advocate for people who couldn’t advocate for themselves.”

Initially, Garlovsky wated to go into divorce law in order to help women. “Back then—this would have been the ’80s—there were fewer divorces, but among those that happened in households I knew of, the typical scenario was one in which the wife had committed herself to full-time care of the children in the home, rather than having an outside career. So when the divorce happened, there was a lot of hardship and injustice for those women.”

But one of her uncles challenged her to look at additional law branches, before making a final decision. “I realized there were so many types of law I could practice that would be helpful to people in difficult situations,” she says. And so,when a college friend working at the office of the Cook County Public Guardian suggested that Garlovsky was a good match for a job there, she went for it.

She started volunteering at the office while still in law school at Loyola University, and ended
up working there for two and 1⁄2 years—a year and 1⁄2 of that as a licensed attorney. While emotionally draining and physically taxing, representing and advocating for children
who had been abused and neglected by their parents was very rewarding.

“I loved the work,” she says. “As an Assistant Public Guardian, I worked very hard advocating for these children. They really mattered to me and I got very attached to them.”

Garlovsky moved on to estate planning and probate law for several law firms, a career that has spanned more than 20 years.

“I really like what I do, because it’s so people driven,” she says. “There’s such a big human aspect to dealing with people who are going through difficult times in their lives. Even if they just need to prepare a will or trust, this can be a very trauma provoking process. Maybe they are coming to you because they just lost a family member, or they themselves are ill. In most instances, they are facing mortality. Understanding the psychology behind that and the need to build trust is crucial, because often these clients are telling you something they may never have told anyone else.” Taking the law practice all the way home, Garlovsky is married to an attorney. Her husband, Richard Saldinger, does commercial litigation as a partner with a firm in Chicago.

“With two lawyers in one household, there is a lot of negotiating that goes on that we aren’t even aware we are doing,” Garlovsky laughs.

But the two learn a lot from one another.

“Sometimes he learns from me how the more human/psychological element can factor into helping him with a case,” she says. “And when there is a case I am dealing with that is procedurally complicated litigation-wise, he can help me sort that out.”

Now that her children are almost out of high school, Garlovsky has had more time to lecture and publish articles in the law community. She is proud to have recently been elected as a fellow to the American College of Trusts and Estates Counsel.
But in addition to these endeavors, finding time to give back to the community that gave her the educational foundation to start on her path is also a priority.

“My mom always instilled in me the belief that I could be anything I wanted to be,” Garlovsky concludes. “She was never able to finish college, so it was important to her that I have the secondary education that I have had. She encouraged me to use my intellect and to work to my fullest potential as an independent, strong woman—a pathway best accessed through education. So having the opportunity to give back to a community by serving as school board president is a privilege for me. The worth is immeasurable.”