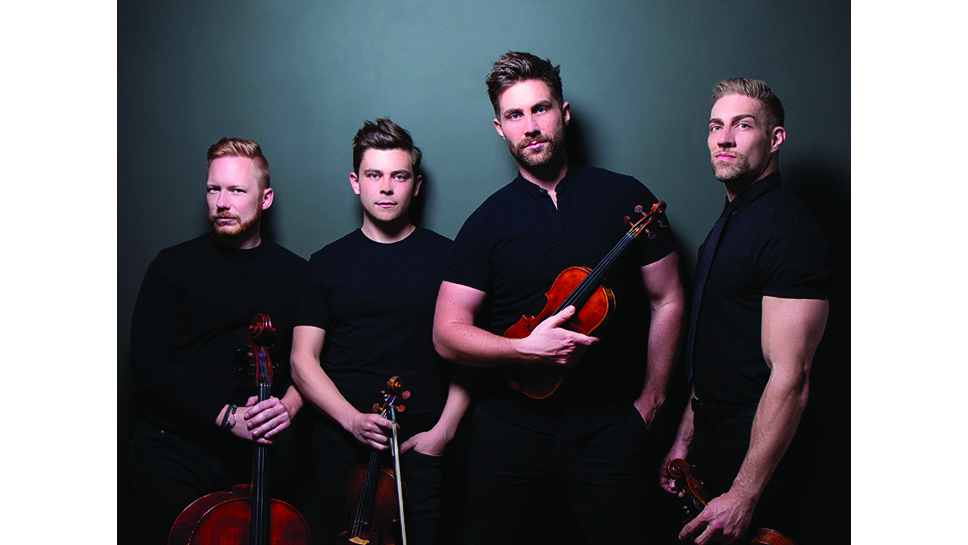 Classical crossover act Well-Strung has got it going on (yes, that’s a reference to the NY-based string quartet’s viral video parody of the Fountains of Wayne hit “Stacy’s Mom”).

We had the pleasure of speaking with first violinist Edmund Bagnel shortly before Well- Strung returned to Ravinia for the second time (Monday, July 15).

Edmund, at what age did you first pick up a violin?

I was 7 years old. My grandparents bought me a violin from an antique store. It was a full-size violin which is way too big for a 7-year-old. I liked messing around on it, so my parents got me lessons on a violin which was a quarter of the size.

Do you play other instruments?

What can you tell me about the genesis of Well-Strung?

It’s been an interesting journey. We started as more of a theatrical thing. We formed in New York City in 2012. We did a short off-Broadway run. We had a very set show at that time. We had a director and our manager and producer, Mark Cortale, who’s still with us. It was funny, we were more of a theatrical piece at that time, so we had monologues and stuff. But people really responded to our music and these arrangements of pop songs that we were doing, and the fact that we were singing while we were playing. Eventually, the theatrical element cage way and we began operating more as a group.

Did you all know each other before you came together as Well-Strung for the theatrical piece?

Yes. I had met Chris (Marchant), the second violinist, previously. I had been aware of Daniel (Shevlin), the cellist. I did not know Trevor Wadleigh, the other violinist/violist in our group. He came on at the last minute. We had someone else who was set to be our violist before our first performance in New York City. A friend of a friend recommended Trevor and he came over. We had our first rehearsal with him basically a week before our first performance.

Who came up with the name?

The name originated from Chris. It’s a little cheeky. You can take it how you want.

On Under the Covers, Well-Strung’s most recent album, some pop songs are paired up with classical numbers, others aren’t. How is that determined?

That’s something we really like to do—to mash-up the pop with the classical at the same time. That’s not something we did immediately. We used to perform a movement of a classical string quartet and then perform a Britney Spears song. But we presented them very much in the same spirit and energy. People responded to that. About two years in was when we did our first pop/ classical mash-up where we brought the two together in one song. I guess the thing is, whether it’s a classical piece or a pop song, it always starts from us liking the music.We never try to force it. In some cases, if a song is good on its own, we’ll just leave it as is. If there’s a great way to combine a pop song with a classical piece, we go for it.

There are vocals on some songs, including “Moon River” and Ed Sheeran’s “Perfect,” while others are instrumentals. What’s involved in the decision-making process regarding whether a song will be sung or an in strumental?

With some songs, it’s nice to just leave it alone and let it be instrumental. I guess it depends on what’s in our wheelhouse and how can we best serve the music we’re working with. Since year one, we’ve been playing “I Will Always Love You.” That’s definitely an instrumental. It’s beautiful instrumentally and we just don’t want to go there.

Are you a violinist who sings or a singer who plays violin?

At this point it’s hard to say. I’ve been playing the violin since I was 7. I’ve been singing since I was a little kid. In high school, I started training vocally. It’s kind of equal in my brain. I guess I’ve been a violinist the longest. Both have always been a large part of my life and career. It’s kind of hard to separate them.

Do you know if artists Well-Strung has covered, including Lady Gaga, have heard Well- Strung’s versions of their songs, and if so, what do they think?

A few years ago, Britney Spears heard our version of “Toxic.” She saw a video of us playing it. That was really cool.

What can people attending Well-Strung’s concert at Ravinia expect?

They can expect a good time. We’ve got a lot of new arrangements.This is our second year coming back. We’re so thrilled. I love Chicago and that whole area. We’re excited to be back. If someone hasn’t heard us before and will be seeing us for the first time, I would say they’re probably going to be a little surprised. Some people say they’re not sure what to expect going into our concert. They wonder if it’s going to be a stuffy classical thing or a frivolous pop thing. Not to sound boastful or anything, but I think most people walk away thinking,“Pop music is good music and it’s very serious.” There’s a lot to work with if you’re coming from a classical background. People who are coming more for the pop music are surprised at how accessible classical music is. How beautiful and rich the classical history is.