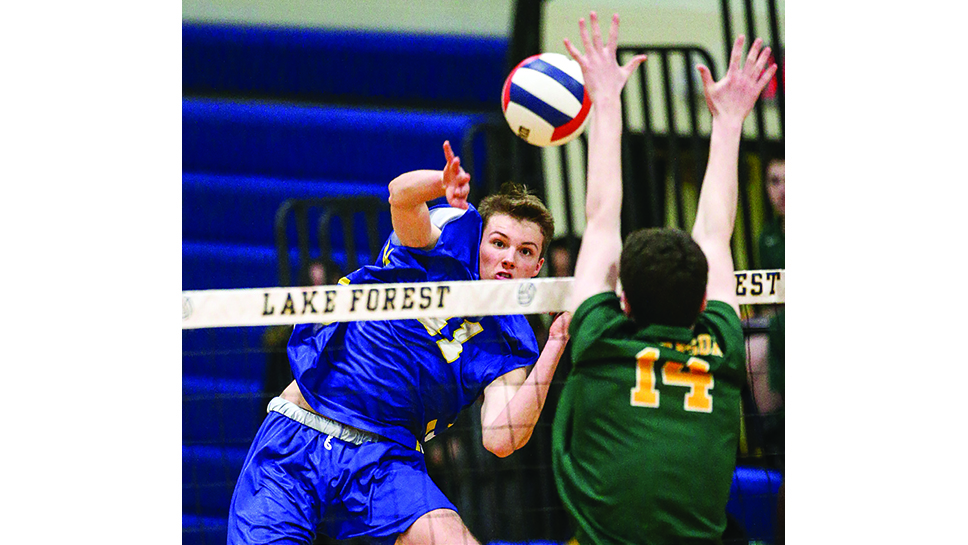 Lake Forest’s Kevin Lamp spikes the ball during the match against Stevenson. PHOTOGRAPH BY
Joel Lerner

The future Lake Forest High School graduate was a third-grader in Lake Bluff at the time, cel- ebrating his birthday. He opened the present from his older brother, Henry Lamp (LFHS, ’12), and wore the gift—a red-and-white-and-black Stanford

“I still have it,” says Kevin Lamp, a 2019 LFHS graduate, a four-year varsity starter for the Scouts’ boys volleyball program, and a 2019 member of USA’s U-21 Men’s Pan-American Cup. “It’s deep in one of my drawers at home.”

The 6-foot-5, 180-pound Lamp earned the right, thanks to an athletic scholarship, to don an official Stanford University Cardinal men’s volleyball uniform beginning next spring.

One of the nation’s top outside hitters and a third-year Sports Performance Volleyball Club performer, Lamp—slated to start his next chapter as a student-athlete in mid-September—fielded a host of questions at a Starbucks in Lake Forest last month.

The North Shore Weekend: What excites you about Stanford and men’s volleyball at the Pac-12 conference school?

Kevin Lamp: The incredible academics, the culture of the program, the world-class facilities on campus. I’m thinking of majoring in either architecture or computer science. Stanford lost in the quarterfinals of the Pac-12 Tournament in the spring, but the preseason national volleyball rankings for next year are out already, and Stanford is quarterfinal at the Pan-American Cup in Peru in May.

No. 2. I’m looking forward to battling for a starting role.

TNSW: Care to share memories of your first day as a freshman volleyball player at LFHS?

KL: It was a day in January, an open-gym session, months before the start of the season. I started on a court with freshman and sophomore players. Some of the players on the varsity court had seen me play in club tournaments. Libero Will Tadel was one of the older guys. He and others pulled me off the court with the younger players and let me compete with them. That season was such a blur; I don’t remember much.

TNSW: You started your prep career as a setter and ended it as an outside hitter. Why the shift to the front row?

KL: I attended a summer volleyball camp at Loyola University after my freshman year.The LU coach, Mark Hulse, told me to give outside hitting a try at the camp. I loved it right away. I still enjoy the impact an outside hitter can have in volleyball matches. My first five or six matches in my sophomore season, I played outside hitter. But I returned to setting after our setter Justin McCartney got hurt. I set the rest of the season.

TNSW: You endured a tough ending to your senior season after returning from the Pan-Amer- ican Cup in Peru. What happened?

KL: I strained a meniscus (knee ligament) in a match against Stevenson. Bad landing. I thought I’d be able to recover and play in the playoffs. But, after warming up before our match against Bar- rington for a regional title, the decision was made to sit that out, too. I wanted to play. I was told playing would have been too risky; playing on it could have worsened the injury.

TNSW: What do you like most about the Aurora-based Sports Performance Volleyball Club (SPVC)?

KL: We practice a ton, we’re a super-disciplined group, and the coaches work you really hard (Lamp and his SPVC U-16 Elite teammates took runner- up honors at club nationals in 2017). I don’t mind the hard work and the dedication you need to show to reach a high level in volleyball. I’m certainly not going to miss the drives to and from Aurora; some- times it takes two hours to get there. My mom and dad, Kirsti and Lennart who are natives of Estonia, did most of the driving. I’d have to eat dinner at 2:30 or 3 in the afternoon, before the drive, because I wouldn’t be able to eat again until 10 p.m.

TNSW: Your favorite moment as an LFHS Scout?

KL: Junior year, we beat Warren at Warren for a regional championship. We had split our two previous matches with Warren that year. That meant a lot, winning a regional title, because it had been 10 years since our program last won one. Everything came together for us that night. Everybody played well. We were super locked in.

TNSW: What are the sports backgrounds of some of your family members?

KL: My dad was very good at volleyball and track when he was young. He was a decathlete in track, and he made national volleyball teams. My mom, she was a heptathlete. My grandfather Jurgen is in his 70s, and he’s a world champion in the long jump, the event I did when I was in middle school. When my grandfather was here for my graduation, he worked out and trained at my school. He looks great; he looks like he’s 55 years old, maybe 60.

TNSW: What drew you to volleyball at a young age?

KL: Watching my brother (Henry, now an en- gineer) play the sport at the club level was basi- cally my introduction to volleyball.The sport looked really fun. He was an outside hitter and middle in club and an outside hitter for the high school team. Henry is still my closest friend, a big supporter. My whole family, really, has been my best support system since I started playing volleyball seriously.

KL: Not sure. My ultimate goal, in volleyball, is to compete in the Olympics. Later, when I’m 5 or so, getting the opportunity to work in San Francisco, maybe in the Silicon Valley, would be nice. We’ll see where my major takes me.