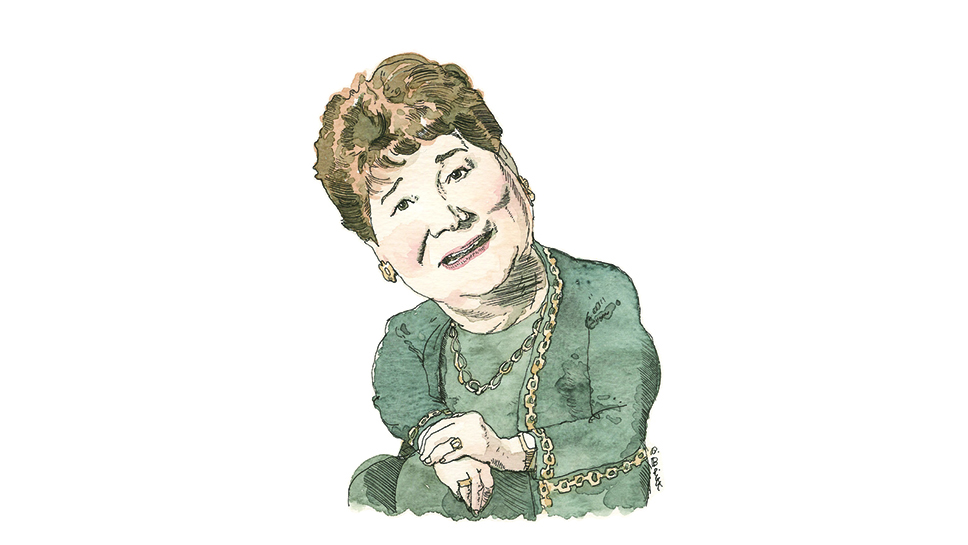 You want to talk about her modeling career, and how as a single mother in the 1960s, she defied all the odds by climbing the corporate ladder at Sears and forging an identity and life all her own.

But these days, the accomplishment Mary Lou Bilder-Gold of Winnetka is most proud of is the work she did caring for her late husband Norbert Gold, who died in November 2017 after a 77-year battle with diabetes.

“Life has been different for me these past few years. I’m not that interesting anymore,” she says, explaining that the fact that her “Norb” lived so long is its own sort of miracle. “I’ve done a lot in my life but I feel that this was the most important part. My loyalty was to Norb during these last eight years. He was diagnosed with diabetes at age 16. He was supposed to die at 30 years old and he lived to 93. He used to say, that’s because of you— because you take such good care of me.”

In a life that’s worthy of its own screenplay, these are the scenes that round out a happy ending. Now 82 years old, Mary Lou was a working single mom in the 1970s when she met Norbert, an accomplished lawyer and a single parent at a Parents Without Partners meeting. They were married for 45 years and lived in Evanston before moving to Winnetka in 1993.
However, to understand the rest of the story behind the woman who served the North Shore community for decades, we must start at the beginning.

Flashbacks of those times can be found in Mary Lou’sscrapbooks, oversized“lookbooks”from her days as a model. To say she looked like Audrey Hepburn is an understatement. The likeness and look is uncanny. And right there it is, blazoned across the top of her portfolio and headshots: “The TODAY girl for tomorrow’s assignments.”

These memories seem to come in modest, matter-of-fact snippets, when you least expect them to, like a novel unfolding. But just when you think you “know” Mary Lou, she will say some- thing—or show you something, like this portfolio and “look book”from her days as a fashion model— that will astound you.

“I never thought when I was a little kid that I’d be living in this beautiful community,” she says, recounting her modest childhood growing up in an apartment building on Chicago’s north side.

“My mother was an opera singer, singing in the chorus at Civic Opera House. She had a beautiful voice, but my grandfather never wanted her to be on stage,” explains Mary Lou, who spoke more Greek as a child than English. “Nice women didn’t flaunt themselves on stage. I never sang but as I got older, I guess I was determined to do something on stage, whether it was modeling or being a commentator.”

Mary Lou’s mother, Irene Konstans, was born in Greece in 1910, but fled to America with her family in 1912. “My mother never wanted to go back to Greece,” she says, “All of the stories
they used to tell at the dinner table about how horrible it was. They used to say that my grandmother came to Ellis Island with my mother hanging on her skirt, a baby in one arm, and one in her stomach.”

The immigrant culture and work ethic stuck with her.

Mary Lou’s first job was at the age of 14. “I was a check writer at a place called William A. Lewis, where models buy their clothes.” From there she quickly got into beauty contests, modeling, and fashion shows, things that went hand in hand in the 1950s. “Stores would select girls
from various schools and post their photo in the junior teen department. They looked to the teens to find out the latest trends in fashion.”

Her modeling resume became a romp through Chicago’s fashion world. She worked fashion shows at Wieboldts and Marshall Fields. Took to the runway at Chas. A. Stevens, Bonwit Teller, and Carson Pirie Scott. But Mary Lou wasn’t your typical, devil-may-care model. She married
at 21, and had her daughter, Marina, at the height of her modeling career. Fortunately, her mother was never far away.

The full-time career wouldn’t be too far off though, as Sears tapped the beautiful young Audrey Hepburn lookalike to head up their charm schools. Her job as fashion coordinator would be to teach teens and women’s group “charm and personal development classes” at three Chicago Fashion” shows. “It was a traveling musical fashion show,”Mary Lou explains.“We would do clothing changes on stage, behind a screen.”

By the 1970s, Mary Lou was on the corporate ladder, eventually taking over public relations for Sears’ fashion divisions, bringing in such celebrity names as Stefanie Powers, Cheryl Tiegs, and tennis star Evonne Goolagong. Mary Lou Bilder was “that girl”—independent, determined, and not afraid of anything life would throw her way.

At 27, she bought her first building, a six-flat near Lake Michigan in Chicago’s East Rogers Park neighborhood, where she raised her daughter after getting a divorce from her first husband. She owns that property to this day.

“I was still in working mode, just retired, ready to take on another challenge. I almost felt like I was back at Sears when I joined the Winnetka Woman’s Club,” Mary Lou says, recalling her marriage to Norb and their move to the community. One of her first triumphs at the woman’s club was putting on a fashion show with a Greek theme. “I went to every store in Winnetka and pulled merchandise. We selected models, fit them, and delivered the show.”

Mary Lou has been “delivering” on her volunteer commitments ever since. Even today, she’s not ready to stop supporting the organizations that welcomed her and her family all those years ago.

“You never know how life is going to change,” she says. “There’s disappointment and there’s joy.”

The day she buried her beloved husband in November 2017, she experienced joy of a different kind. It was bittersweet but well deserved. In her final years of caring for Norb, the Winnetka paramedics were a fixture in their home. She estimates they made 80 visits over the last eight years. “They’re my best friends,” she says.

And true to that statement, and in a testament to what the couple means to the community, the Winnetka Fire Department paramedics drove a fire engine down to the funeral mass at Saint Andrew Greek Orthodox Church on the north side of Chicago.