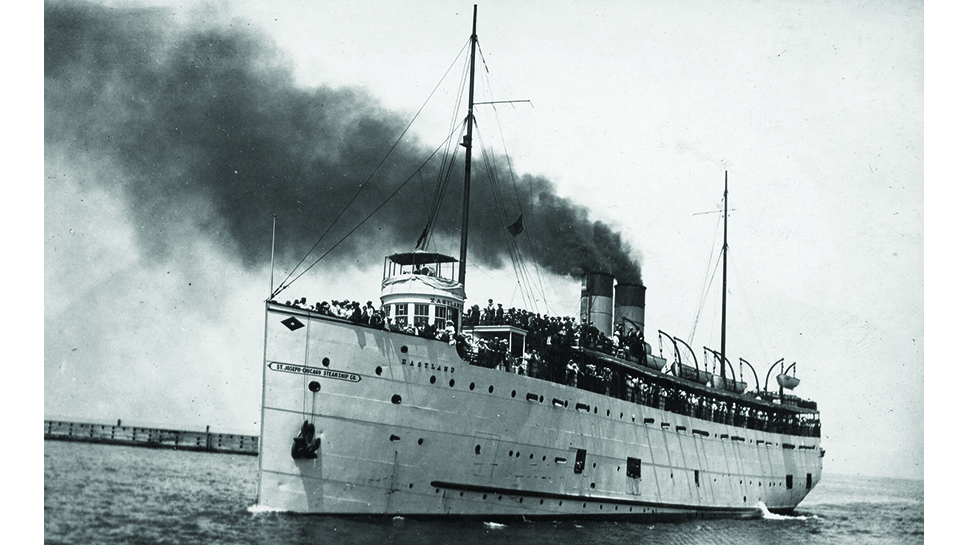 Within 20 minutes on the misty, damp morning of July 24, 1915, death sat down at the party. The day had been carefully designed as the social beacon of Chicago’s working-class summer that year.

Within those 1,200 seconds, it would become the day Chicago wept.

Only a plaque on the Chicago River’s south wall at the LaSalle Street bridge marks the tragedy. The Eastland capsized at that spot—killing 844 Chicagoans, mostly young Czech and Polish immigrants.

For 18 years, Evanston native Harvey Moshman has been obsessed with the worst single tragedy in Chicago history. He could not escape curiosity and anger. And now, with his second WTTW-Channel 11 television documentary on the Eastland disaster debuting at 8 p.m. July 25, he can put down the sword and relax.

“I think,” he says with a long pause to calculate his words, “that this is my last one.”

As for producing partner Chuck Coppola, is he done? “Hundreds of family members’ stories left to be told.” He still grips the sword.

What happened to the mostly young women and children who perished still angers both, 18 years after their first documentary.The more they learn makes them angrier. Anger is appropriate, because humans caused this tragedy, and were never held accountable.

Eastland: Chicago’s Deadliest Day might make you angry, too.

At the very least, the 85-minute documentary forged with a team of North Shore filmmakers and funded by the Chicago Marine Heritage Society will reveal how Chicago’s heart was broken that day. Music composer Steve Rashid and audio designer Sam Fishkin also are Evanston-based participants who joined the team for three years of heavy film design.

A documentary that opens a wide lens will hint why the Eastland casts a barely discernible blip on Chicago’s cultural radar. There were no Astors, Guggenheims, or Strausses on Eastland as they had been on Titanic. Just immigrant kids. No one spoke for them.

But in those 20 minutes, as the Eastland’s empty ballast tanks fought pointlessly to keep the ship upright, it began to list left—then faster as the crowd was pushed below decks, before suddenly there was no escape. The “Speed Queen of the Great Lakes” lurched once and rolled on its side in one horrific fall that killed 844 partiers within minutes.

Said a rescue worker on the shore: “The sound of the children screaming was too much to bear.” Those on the left side of the capsizing ship died.

Those on the right side lived. Whole families perished in each other’s arms—including 22 families of mother, father, and children. Three sets of engaged couples died clutched in embrace.

Amidst the tragedy and chaos, there were stories of personal heroism—strangers, police, and fire-fighters jumping into the Chicago River to save anyone they could reach.

Moshman and Coppola dived into a rich cache of data unknown 20 years ago. Each of four authors who have produced scholarly works in the interval added sinew to history.
This collaboration seems to answer several puzzles, including employing CGI (computer generated imaging) that visually shows the minute- by-minute death throes of Eastland as eyewitnesses say it occurred.

But why does Chicago not commemorate the event as a larger human tableau than the Chicago Fire (300 deaths) or even the Hindenberg (36 deaths)?

First, the Eastland should never have been cleared to sail that day, or any other day, with passengers. Two marine architects, a decade apart, independently had issued stern, unequivocal warnings that the ship was inherently unseaworthy. A succession of five owners all ignored the warnings in favor of extending profits. Compliant maritime regulators stood mute.

It was a shallow, top-heavy ship designed for cargo. It had almost capsized twice before with half as many aboard. Every one of the constant refinements over 13 years turned it faster, and more unsteady. Eastland was beautiful, but bore a bad reputation.

Secondly, the 844 who died, 1,300 who escaped, and the thousands of relatives left behind were never compensated for the horror. No one even tried. The corporate owners swallowed up the evidence in two trials. Moshman and Coppola clearly imply the fix was in.

“We didn’t go looking for villains—but we found them,” Coppola says. Famed attorney Clarence Darrow successfully defended the captain at trial, but never again said a public word about his legal role in hiding the truth.

Another discovery was that the owners’ not-so- subtle spin on the story that passengers had rushed to the left side of the 265-foot ship, and caused the catastrophe, didn’t happen. “The passengers were squeezed together too tightly to move at all,” Moshman says without equivocation.

A handful of factors—original awkward design, 100 tons of post-Titanic mandated lifeboats stored on top decks, concrete decks replacing rotten wooden planks, totally inadequate ballast tanks—all made the Eastland a ship built to die. Chicago’s heartache was intense, but relatively brief as an officially noticed event. Gravediggers and morticians worked around the clock. Some immigrant parishes conducted simultaneous funerals 30 at a time. Chicago’s mayor ordered that newsreel motion pictures taken at the scene of the disaster be banned in local theaters. “They were seen around the world, but not in Chicago,” Moshman says. “Our documentary shows those films for the first time. If I have one hope for this documentary is that it leads to the Eastland story being taught in Chicago public schools. It’s not now as far as I know.”

The most surprising discovery of all?
The Eastland did not die that day. It was refloated, saved at auction for $45,000,redesigned again, and sold to the Navy Reserve as a Great Lakes training gunboat. It was renamed, oddly enough, the USS Wilmette after the North Shore community.

Why Wilmette? No one knows … yet. Be sure to tune in later this month. WTTW’s schedule on the new documentary is here: https://schedule.wttw.com/episodes/478920/Eastland-Chicagos-Deadliest-Day/