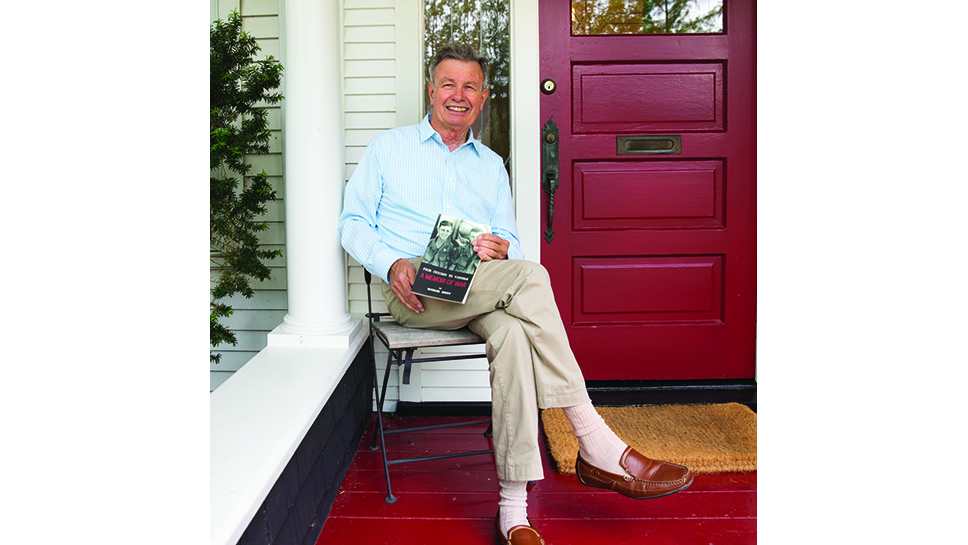 Michael Duffy at his home in Wilmette. PHOTOGRAPHY BY ROBIN SUBAR

Taking the Army’s offer of officer candidate school was an easy choice at the time for Michael Duffy. Now a Wilmette resident, then he was a draftee making less than $100 a month as a private. Lieutenants could get nearly $800 a month.

A year later, as the young lieutenant stepped off the C130 cargo plane at the massive base in Saigon, Vietnam, the deal didn’t seem quite as sweet.

His introduction to Vietnam literally was an introduction to war. As he departed the plane at 2 a.m. on January 31, 1968, Viet Cong bullets were flying in every direction at Saigon’s main military airport.

They were flying at him, over him, and past him. He had no weapon or jungle camouflage khakis; only a tan officer’s uniform. The Army lost his duffle bag and all his possessions so he ripped off his uniform, racing for a helicopter escape and bloodied his hand on the tarmac for good measure.

It’s a story that could make a good book. Luckily for fans of history, his memoir about that year is a very good book.

From Chicago to Vietnam: A Memoir of War

was a rich enough narrative that even three years after it was published, Barnes & Noble selected it in May as one of the bookseller’s national “15 Heroic Books for Memorial Day.”

With Independence Day coming up next week, we thought it was the perfect time to celebrate our own local hero.

The book is brimming with virtually hour-by-hour details of the life of a young officer on the edge.

A private stuck an Army pamphlet in his hand. It was an introduction to Vietnam’s rich cultural history. The private also suggested Duffy get a rifle as soon as possible.

The kid who had grown up a budding artist in Rogers Park had landed in the middle of the first day of the historic Tet Offensive in which 85,000 Vietnamese guerrillas and North Vietnamese army regulars were simultaneously attacking every American installation in Vietnam.

The country, and every place in it, was in a chaotic firefight.

Today, Duffy lives in Wilmette, where he also runs his own successful men’s clothing distributorship. What he brought forward with him though the 51 years from 1968 to now is every intact memory of that year.

For those who might wonder how 50-year-old memories can be reconstructed precisely for historical credibility, Duffy didn’t have to do that.

“I’ve been writing this book for 30 years, and I figured it was about time to publish it,” he says. “I wrote the entire book—320 pages—in longhand. I have this stack of pages a foot high. There are loose leafs and notes all piled up. Then eventually, I got a word processor and transcribed it.”

He was the boss of Company C, 7th Battalion, 9th Artillery. But as the year progressed, he became more aware of the realities of that war.

“When the sun went down, we had our six howitzers ringed with concertina wire. But you took your life in your hands if you went outside at night. It was then I

I started to realize that I didn’t know if this was winnable. Maybe it had to be negotiated. We had a half million men there; the Australians had 60,000

There were even troops from Korea and Thailand, plus two million South Vietnamese soldiers. And yet the guerrillas made it unsafe to go outside.”

The Tet Offensive had been designed to show that the Viet Cong would never surrender, and no number of troops would make Americans safe there. It took another seven years for that argument to be validated when Saigon fell.

Duffy had long since left for home, though he was offered Captain’s bars in return for a second year managing artillery at a higher level.

“If you talked to any soldier in Vietnam then, they all said they had one goal. Just to go home. That was it. To go home.”

The judgment seemed to be vindicated that year when the Viet Cong overran Duffy’s firebase in the old French provincial capitol, killing 22 American soldiers, including Captain Allen Ross Culpepper.

Culpepper won a posthumous Bronze Star, Distinguished Service Cross, and Purple Heart for his heroism that day.The captain’s bars Culpepper wore that day might have been Duffy’s had he stayed.

Duffy has spent a year telling his story of war and life growing up in Chicago for library patrons in Wilmette, Glencoe, Lake Forest, and up and down the North Shore.

Duffy self-published his book at Inkwater Press, but the recent notoriety and sales have opened other doors. Pemic Books and Volvox Globator, two publishers who saw his book at the Book World Prague 2019 Catalog Show, have now expressed interest in publishing it in the Czech Republic.

“To be honest, I always thought the book would be successful, because each of the memories was very vivid when I wrote them,” he says.

From Chicago to Vietnam: A Memoir of War, is available at Barnes & Noble as well as amazon.com