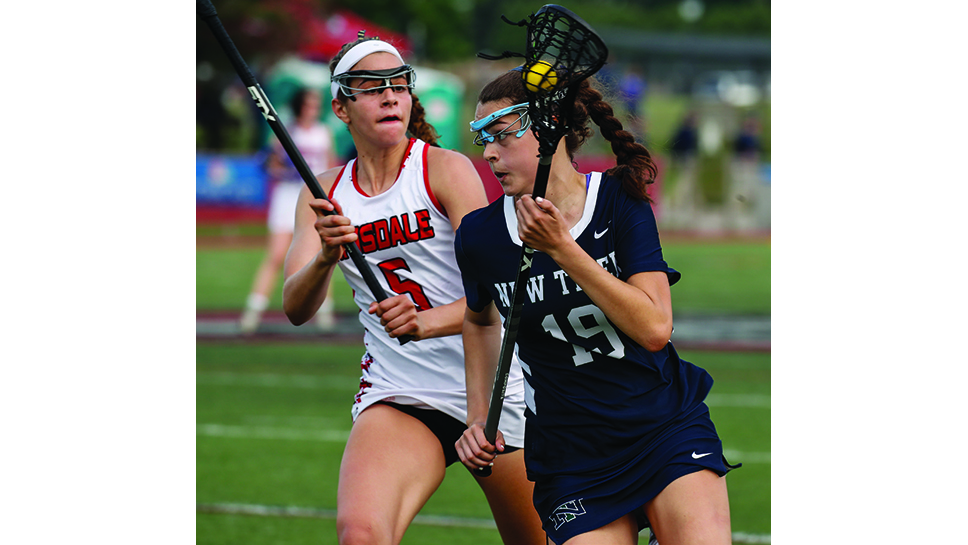 Forget any of the many goals Lucy Murray scored for New Trier High School’s girls lacrosse teams in four seasons.

Forget any of her oodles of assists, too.

For Trevians girls lacrosse coach Pete Collins, the most memorable moment in the career of Murray—a 5-foot-10, Dartmouth College-bound attack—was the time she went full-blown “NASA” after a teammate’s goal this past spring.

Murray’s celebratory liftoff in the regular-season game against reigning state champion Hinsdale Central High School on May 15 left quite an impression.

“I’d never seen Lucy jump as high as she did on that day,” Collins recalls. “I’ll remember that for a while. And then, watching her come down and embrace that teammate [junior attack Annie Thompson], who had just scored, truly captured what she was all about for us: a player who always showed genuine enthusiasm for her teammates.

“Lucy, the athlete,” the coach adds, “is tough, gritty, and determined. But there’s also a side of her that likes to have a good time in competition, especially following a teammate’s success in a game. She was focused. She had fun. Lucy had good balance.”

The latter title was the program’s first in 11 years.

“It was a good year,” Murray, a Wilmette resident, understates.

Their mother, former Brown University women’s lacrosse player Kristen Murray, serves as one of Collins’ assistant coaches and has passed along at least 3,215 lax tips to Kelsey and Lucy since Kelsey wielded a stick for the first time in the late 1990s.

“I grew up with lacrosse; it’s been a huge part of my life, and I got to learn so much from my sister—an incredible person and role model, in addition to being such an amazing player,” says Lucy, whose father, Todd, played basketball at Brown. “I wouldn’t be the person I am today without lacrosse, which has given me a lot of opportunities. I love all the connections I’ve made through the sport, especially through the New Trier lacrosse program.

Collins’ sentiment, too—for the positive impact Murray had on his program from 2016-2019. Murray, who set up behind foes’ goalkeepers all four years, was asked to focus primarily on feeding the ball to open or cutting teammates during most of her freshman season. Her assist total, no surprise, surpassed her goal total.

“We had so many threats on offense that year, like we had this year,” says Murray, who displayed her proficiency on offense in ensuing seasons. “The most rewarding aspect in a lacrosse game, for me, continues to be making a pass to a teammate, who then scores.”

Murray, a first-team all-stater in ’19 (also her jersey number), notched her share of significant lacrosse goals, perhaps none bigger than the game- winner—part of her three-goal, three-assist effort—in New Trier’s 15-14 defeat of Glenbrook South High School in a state semifinal on May 31. Her leadership and positivity lifted the Trev- ians in the late stages of a tight contest with perennial power Loyola Academy earlier in the season.

“Loyola,” Collins says, “had just scored to break a tie. But there was Lucy, shouting, ‘We’ve got this, we’ve got this, we’ve got this,’ to her teammates. We asked her to fulfill a lot of roles in her career, and she never failed to do so. She was a coach on the field for us her senior year, as well as the quarterback of our offense. Lucy did such a great job reading defenses and moving the ball for us.”

NT’s reliable signal caller played hurt for most of her career. A stress fracture in her back sidelined her for six weeks in 2017. The injury lingered. And lingered some more. Countless appointments with a chiropractor during Murray’s senior season couldn’t keep her from pacing a 22-1-2 Trevians club in assists (65) and finishing second among teammates in goals (82) to junior middie Claudia Shevitz’s 94.

“It helped, seeing a chiropractor,” says Murray, also a member of three lacrosse state runner-up teams and a field hockey state runner-up crew. “But the pain never went away. I tried to play without thinking about it. My goal this summer is to stabilize my core and get in the best shape possible before I head to college.”

The Dartmouth College women’s lacrosse coach for the past three seasons, Danielle Spencer, chose to head west earlier this month.The former Northwestern University lacrosse standout and three-time national champion (2007-2009) was hired to guide the women’s lacrosse program at none other than Kelsey Murray’s alma mater, Stanford. Spencer earned Ivy League Coach of the Year honors in each of the last two seasons; her last Big Green team tied Princeton’s Tigers for the Ivy League regular-season title.

“Kind of a bummer that I won’t get to play for her,” says Murray, who is thinking of majoring in psychology. “She’s an incredible teacher of the game and developer of players. Good for Stanford, and what an opportunity for Danielle.”

Regrets, sports-wise, in Murray’s first 18 years? Murray has only one.
“That I didn’t play varsity basketball at New Trier,” she says. “I liked to shoot around in our driveway, and I had fun competing in ‘Night League’ [intramural basketball].”

As for her vertical jump, she downplays it. “I don’t have much of one,” Murray insists. A certain girls lacrosse coach begs to differ.