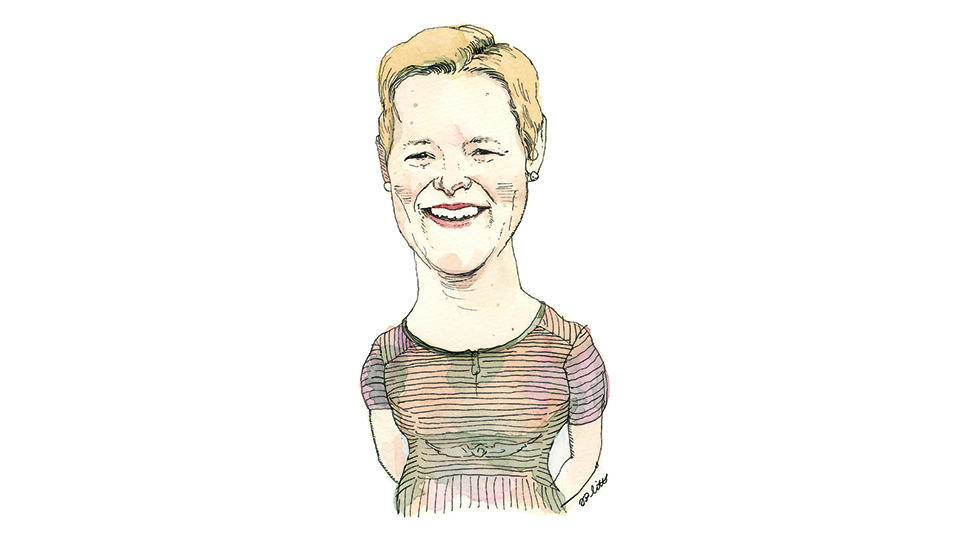 Smiling and bright in a periwinkle blue T-shirt and jeans, Rachel Wills looks surprisingly fresh for someone who just finished the grueling 200-mile Dirty Kanza gravel bike race in Kansas the day before. But race she did, covering 200 miles on rough road through high temperatures in 14 1/2 hours, finishing before sundown—a personal goal.

Currently racing with The Meteor // Intelligentsia, the only all-women’s gravel cycling team in the U.S., Wills has become an ambassador for women in bike racing—appearing and participating at competitions such as the upcoming Northwestern Medicine Lake Bluff Criterium on July 27, which is part of the Intelligentsia Cup, a ten-day series of bike races around the Chicago area.

This year, the series includes eight criteriums and two road races as well as the Illinois State Road Racing Championships, making it one of the biggest race series in the country.

Wills is optimistic that the sport will continue to evolve, giving women greater parity in an arena that has for decades been male-dominated.

“Traditionally, bike racing has been a male-dominated sport, with participation numbers, team support, and in prize money. Race organizers are more actively reaching out to get women to participate, and parity is one of those hot topics. Equal race distances, racing opportunity, and yes, equal payouts are all important.

The Intelligentsia Cup has stepped up and has equal payout at every venue and in the overall omnium for the
pro fields, which is fantastic.”

However, unlike tennis, basketball, or other team sports where there is a natural on-ramp to potential athletic careers through youth leagues and high school teams, bike racing lacks that infrastructure.

“It’s more difficult for young people to learn about and train for bike racing because there are very few bike racing teams in college and even fewer in high school or junior high,” says Wills.

But on the plus side, bike riding has a positive image with the potential to be a lifelong pursuit.

For Wills, who grew up three and a half hours north of Minneapolis in Grand Rapids, Minnesota, camping trips to the North Woods with her outdoorsy family always included bikes.

“We weren’t cyclists; we were bikers, who rode just for fun,” she says.

Her first bike was purple, with a matching umbrella, followed by a series of pink and purple Huffys and Schwinns. But when 10-year-old Wills saw a sparkly teal Schwinn in her hometown bike shop, pink went by the wayside.

“I saved my allowance and Christmas and birthday money for three years to buy that sparkly teal bike,” Wills laughs. “It was a Schwinn Sidewinder and was the first of my bikes to have gears!”

But Wills’ switch to competitive racing didn’t happen until several years later. A swimmer from the time she was 6 months old, Wills says she felt much more comfortable in the water and never thought she could be a “land” athlete.

“I loved swimming competitively, which I did all of my life,” she says.

Winning a local triathlon relay for three subsequent years with two friends who did the biking and running portions of the race (Wills did the swimming leg) plus, having a boyfriend who was a triathlete, opened Wills eyes to what being a multi-sport competitor could look like.

After completing a business administration degree with specialization in marketing, recreation, and leisure services at the University of North Dakota where she was on a swim scholarship, Wills took a business job in Minneapolis for several years.

Wills bought her first real road bike, moved to San Diego, and did her first triathlon one month later. Two years later, she did her first Ironman Triathlon and the following week, she was on a bike again, this time racing in her first criterium race. (Called “crits”for short, these are high-speed races held on closed loop courses between .5 and 2 miles in length.)

Wills laughs as she says, “Yeah, that was probably a bad idea, but I was hooked! Going fast was fun!”

As Wills’ skills in biking matured, she also went to professional bike-fitting school—the skilled trade of fitting bikes to the people who are going to ride them. Now with Velosmith Bicycle Studio in Wilmette, Wills is one of the few female bike fitters in the country. She says she is passionate about fitting.

“For me, it’s about the integrity of it, making sure a bike is fit perfectly for its rider. People don’t realize how crucial it is that they are fitted to their bikes appropriately. It’s paramount— whether it’s a $1,000 bike, or a $12,000 bike, the fit is the most important thing. If the fit is wrong, riding will be uncomfortable and injuries can happen, making it unlikely that someone will persist with riding.”

Wills’ relocation to the North Shore brought with it the invitation to be on the Chicago Women’s Elite Cycling team, and then The Meteor // Intelligentsia team, which gives her the opportunity to do crit racing, road racing (professional bike racing on paved roads), and gravel racing. Unlike crit and road races, gravel races are generally between 60 to 200 mile courses on rough terrain and require great endurance.

Wills says being on The Meteor // Intelligentsia team has been empowering.

“Being on the first all-women’s gravel racing team, we have been privileged to have a platform as role models to talk about the sport, and what cycling is doing for various communities. We are especially thrilled at the opportunity we have to get more women on bikes in races. There is growing interest in bike racing, and in gravel racing in general—an endurance sport that gives people the chance to explore parts of America off the beaten track,” says Wills.

Her word to young women?

“Get on your bike. Ride. And keep riding. Do it for fun, and if you love going fast and are interested in racing, get to know people who are into cycling. Come visit our tents and cheer us on at Lake Bluff Crit and the other IntelliCup races. Once we cross the finish line, we’re all pretty approachable.”

To learn more about The Meteor // Intelligentsia team please visit matchestoburn.com And for more information on the Northwestern Medicine Lake Bluff Criterium go to lakebluffcriterium.com.