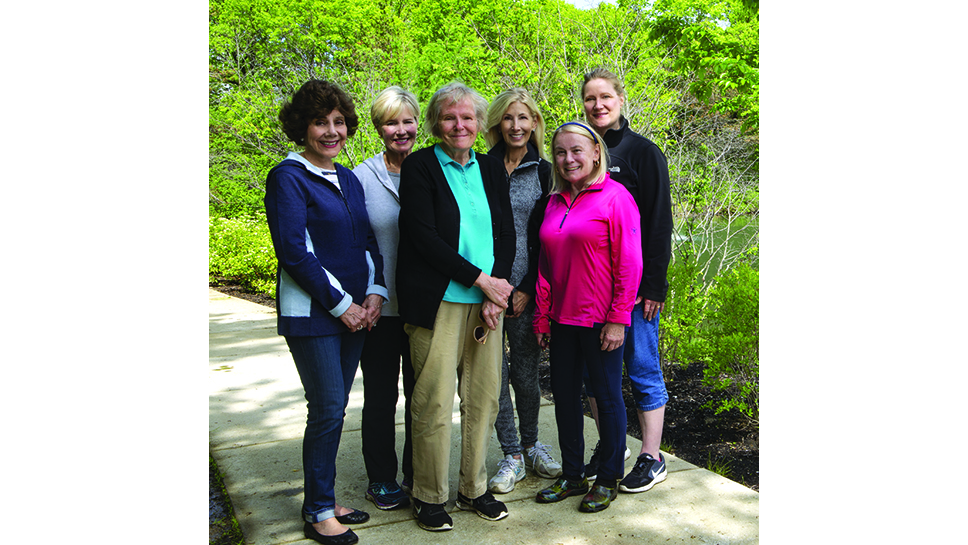 By 6:30 a.m. on a recent Tuesday, soft shafts of morning sunlight had already worked their way past the West Lake Forest Train Station, and across Telegraph Road. There, they lit up the baby leaves of freshly emerged perennials, a cluster of holly bushes, sumac shrubs, hibiscus plantings, red twig dogwood, and assorted grasses.

And down on the banks of the pond at their feet, a pretty little grove of young larch trees showed off the bright red buds that, come fall, will mature into pine cones.

Not long ago, this peaceful oasis was nothing more than a retention pond, edges choked with a tangle of underbrush. But the Deerpath Garden Club of Lake Forest (DGC) saw potential for something more. And after two years investing resources, planning, and partnership with the City of Lake Forest, the pond and encircling garden have been reborn as a Garden of Remembrance dedicated to garden club members past and future. 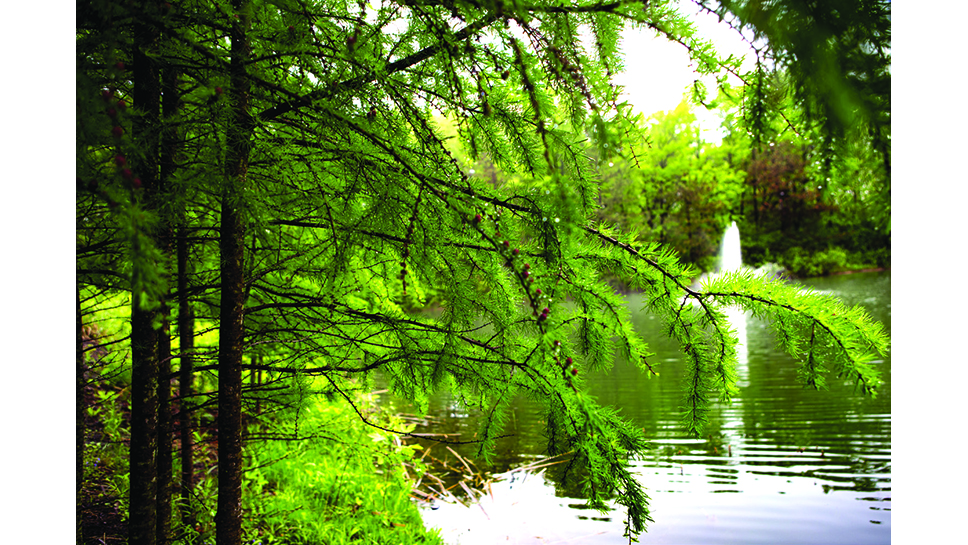 Garden of Remembrance was created in honor of garden club members past, present, and future. PHOTOGRAPHY BY MONICA KASS ROGERS

“We couldn’t be more thrilled that this has come to fruition,” says Connie Maines and Mary Carlson, DGC philanthropic co-chairs.

The group will hold a ribbon cutting to unveil the new garden to the public at 9:30 a.m. on Wednesday, June 19—followed by a garden walk with members and friends.

As Maines and Carlson stated, it’s been a long time coming.

The idea of cultivating gardens on the west side of Telegraph was a natural outgrowth of extensive work DGC had already done around the train station. In 1992 when the West Lake Forest Train Station had just been completed, the club took on the task of designing and installing gardens near Everett Road—an award-winning effort that continued to evolve with the addition of large plots of annual and perennial plantings, a limestone walkway, terrace, and limestone benches. The club also installed and dedicated a Blue Star Memo- rial Marker at the south end of the garden to honor the men and women who have served in the armed services. 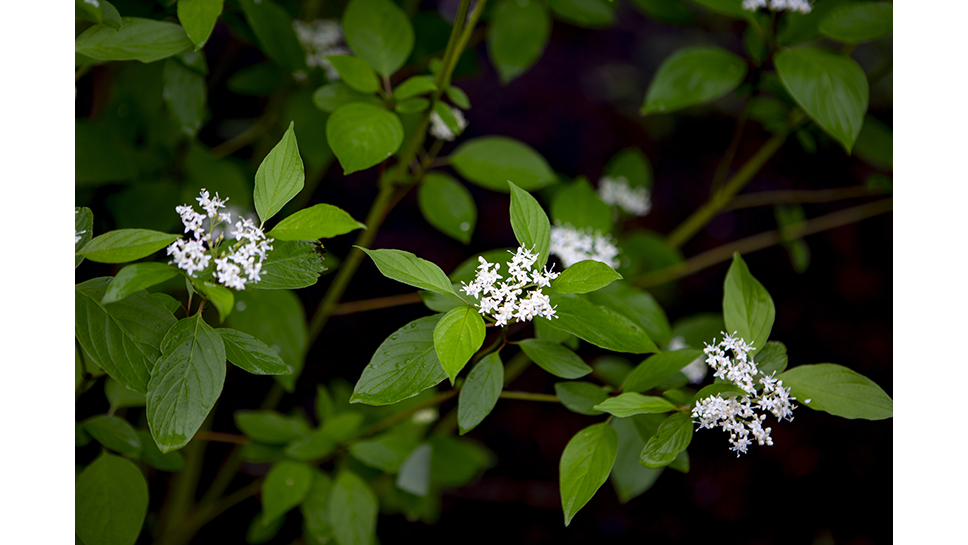 The new gardens to the west of Telegraph have poignant purpose as well.

“We had recently lost three of our members and really wanted to do something special to commemorate all of the work they, and other members, have done to beautify Lake Forest,” says Maines.

“Just planting a tree didn’t seem enough. With this garden, we’ve had the opportunity to make some- thing beautiful out of a neglected space. People used to pass by this spot without notice. Now, with the park benches, memorial stone, garden, and the newly-functional fountain in the pond, people have a place to pause and reflect on the natural beauty of this landscape.”

For this location, a naturalistic plan was the way to go. Once underbrush was cleared, larch trees growing along the banks of the pond came into full view—a rare and lovely thing. Larches—deciduous trees that look like evergreens but drop their golden needles each fall—are difficult to source, but love a water-fed location. Filling in around these trees with plans from Craig Berg- mann Landscape Design and the partnership of city planners, low-maintenance plants were chosen that could both take hold on the steep grades of the embankment and draw from the water in the pond.

“We also took into consideration seasonal interest, including plants that will look beautiful throughout the year,” says Carlson.

Plantings include serviceberry trees, Accolade elms, holly and sumac shrubs, and a mix of short, medium, and tall grasses—including sporobolus and andropogon. And, at the water’s edge, there are aquatic plantings of hibiscus, pontedaria, and liatrus. 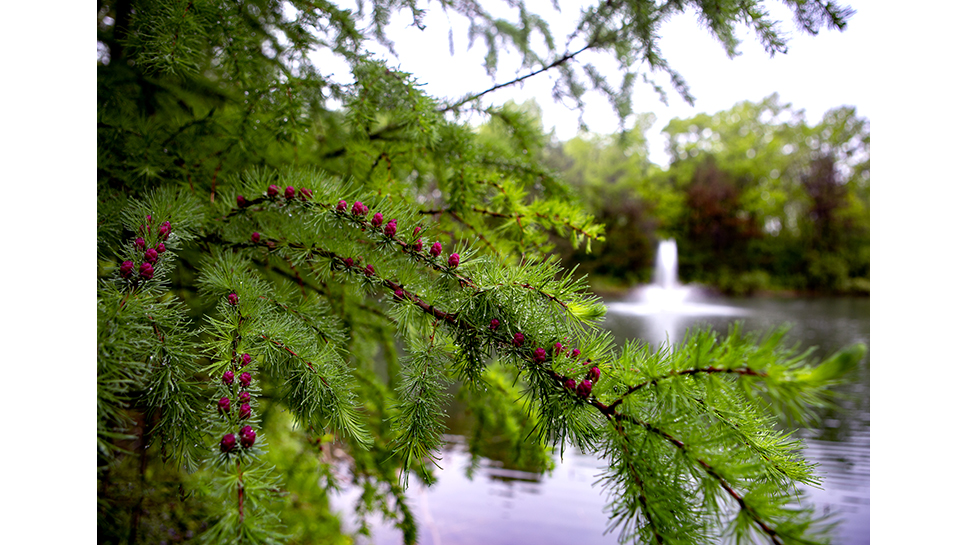 A seating area at the southeastern corner of the garden is situated next to a commemorative boulder emblazoned with the tribute: “The Deerpath Garden Club of Lake Forest dedicates this Garden of Remembrance in memory of past members and in celebration of those who continue our mission of Beautification.”

Founded in 1960, the DGC was created by a group of friends in the Lake Forest and Lake Bluff area who wanted to share their love of horticulture, learn more about floral arranging and landscaping, and promote civic beauty. Their locally-focused philanthropic efforts have included everything from funding projects at Elawa Farm Foundation to Lake Forest Open Lands Association, Forest Park, Stirling Hall, Ragdale, Belvedere, and the Lake Forest Library.

To learn more about the club and how to support its efforts, please visit deerpathgardenclub.org.