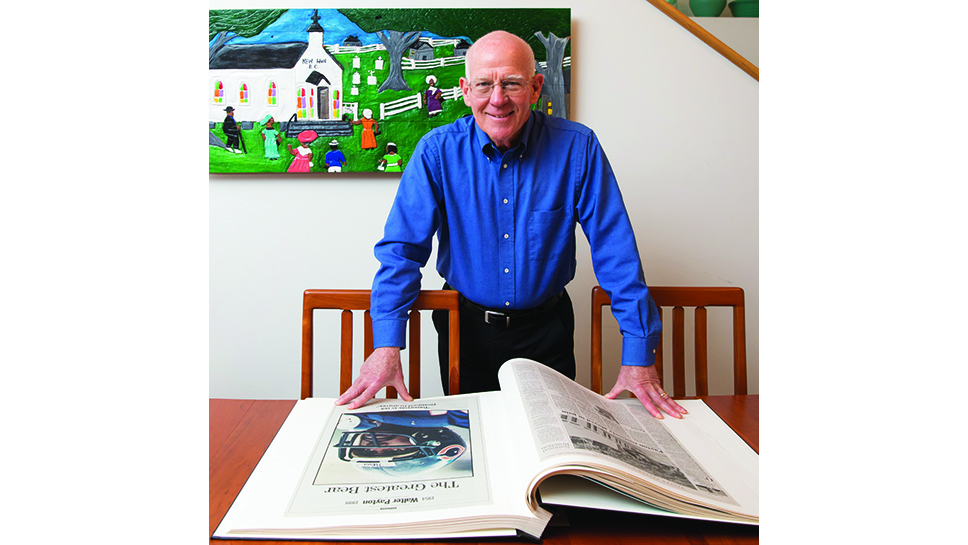 Don Pierson of Lake Forest has penned a history of the Chicago Bears. PHOTOGRAPHY BY ROBIN SUBAR

While tackling the century-long history of the Chicago Bears is a staggering task, it would be hard to find someone better equipped for the job than Lake Forest resident Don Pierson.

After all, he still has his 1957 copy of Sport magazine—with Chicago Bears’ fullback Rick Casares pictured on the cover by the headline

“New Monsters of the Midway”—that he received as a boy growing up in Ohio. The Chicago Tribune assigned him to cover the team starting in 1968, meaning he endured the lows of the Jim Dooley-Abe Gibron era and wrote about one of the most famous teams in the history of sports, the 1985 Bears.

Along with The Athletic’s Dan Pompei, Pierson has co-authored the Chicago Bears Centennial Scrapbook. Covering ownership, players, rivalries, championships and more, the coffee-table book selling for $55 commemorates the team’s 100th season in 2019. He and Pompei will appear at the History Center of Lake Forest-Lake Bluff on Thursday, June 13 at 7 p.m. to talk about their 320-page work. That same evening, the History Center will open an exhibit on the Bears that will emphasize their long ties to Lake Forest, which began in the mid-1970s and continue today in their facility near the I-94 tollway.

“The whole thing was more fun than I thought

it would be,” said Pierson about the three-year project. “I really enjoyed looking up the old games. But about halfway through the book, I said to Dan,

‘This isn’t funny enough. We need to do stuff on guys who are just characters.’They blew it up into a major section.”

Perhaps the most obvious character is Mike Ditka. Once, when he played for the Bears, a fan ran onto the field near the end of the game at the Los Angeles Memorial Coliseum. Ditka knocked him to the ground. As legendary Chicago columnist Mike Royko wrote, “The fans booed Ditka, but that was wrong. Ditka has been trained since high school to knock down anything that moves.” Of course, Ditka coached the 1985 Bears, and Pierson was an eyewitness.

“They were such a fun team to cover. They were so open,” Pierson recalled. “I make the argument in the book that was the best NFL season ever.

“They weren’t a dynasty. But I defy anyone but the most rabid sports fan to tell me the difference between the 1962 Green Bay Packers and the 1965 Packers. The 1985 Bears—people in China knew who The Fridge was.”

Though Pierson’s ties to the team run deep (he covered them until 1987, when he moved to the Tribune’s NFL beat), they aren’t as long or thorough as those of one woman: team owner Virginia Halas McCaskey. Born in 1923 to George Halas— founder of the Bears—she is old enough to remember the cross-country barnstorming days of halfback Red Grange and the 1940 championship victory over the Washington Redskins by the as- tounding score of 73-0.

“She hasn’t forgotten a thing,” said Pierson, who with Pompei spent about 14 hours interviewing McCaskey over numerous visits. “Red Grange would carry her through train stations in the 1920s so he wouldn’t be bothered by autograph seekers. It’s just fascinating.”

Though Pierson knew plenty about Halas, he was still inspired by his impact on the sport from the beginning of the NFL in 1920.

With the deadline for the book slated for the middle of the 2018 season, Pierson had a question for the editors that summer about the squad coming off a 5-11 campaign.

“I said, ‘What if they make the Super Bowl?’ Everyone laughed.”

Then, as the Bears thrived under new coach Matt Nagy, going 12-4, the deadline was pushed back. But the double doink in the playoffs ruined any chance of a Super Bowl ending to the opus.

From Sid Luckman to Dick Butkus to Walter Payton and beyond, there was plenty to write about. Pierson pointed out the Bears gave a free hand to cover what he and Pompeii wished, even if it wasn’t flattering.

Said the veteran scribe, “I would say this is the definitive history of the entire operation.”