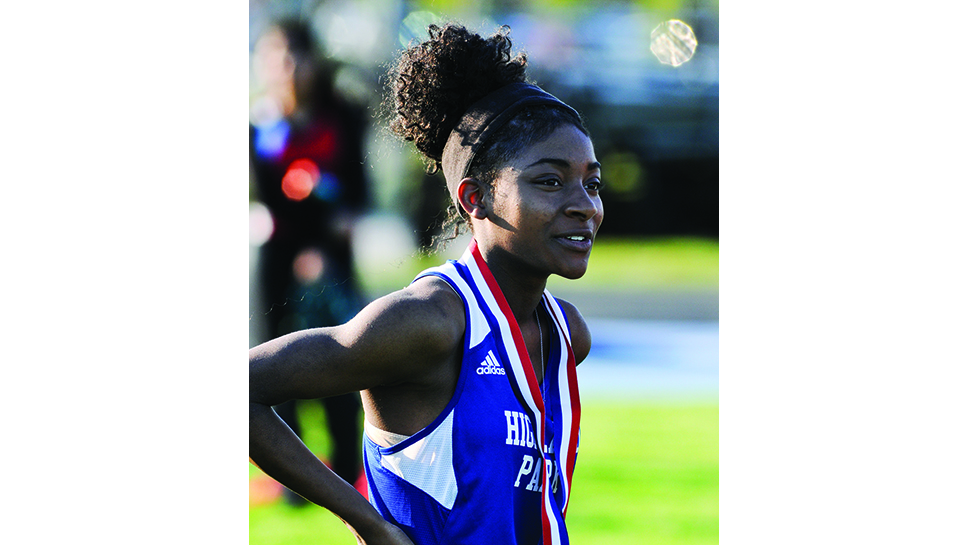 ‘TAY’-DA!: Highland Park High School senior Taylor Gilling bolted to a pair of sprint titles at the Class 3A girls track and field state meet in Charleston on May 18. She will race for the women’s track and field team at the University of Wisconsin next spring. PHOTOGRAPHY BY GEORGE PFOERTNER

Taylor Gilling might not have to purchase another bag of Skittles until Halloween.

The Highland Park High School senior earned a bag of her favorite candy by racing to a pair of spectacular finishes at the Class 3A girls track and field state meet in Charleston on May 18.

Athletes in Palmberg’s program receive their favorite treats after recording a personal-best effort in an event.

It’s a yummy tradition at HPHS.

Results don’t get much sweeter than that for sprinters.

She won both tests convincingly.

“Taylor looked surprised after the 200, and then she appeared to be shocked,” Palmberg recalls. “Her time in the 200 was phenomenal. But then, as I watched her continue to react, I noticed joy. You could see, from the look on her face, the joy—the pure joy she was experiencing while taking it all in. Taylor appreciated the moment.”

Gilling made program history at state. Twice. A female track and field athlete at HPHS had never won an event at a state meet until Gilling beat runner-up Ameia Wilson (11.55), a Danville High School senior, in the 100. Wilson also settled for silver in the 200, after clocking a 23.57 at Eastern Illinois University’s O’Brien Field.

“Those were my goals all season, winning those two races,” says the gregarious Gilling, who took runner-up honors in the 200 (24.37) and placed fourth in the 100 (11.89) at last year’s Class 3A state meet. “Reaching those goals made me happy.

Gilling, bound to achieve special feats as a scholarship athlete at the University of Wisconsin from 2020-2023, felt she needed to work onher starts between her junior and senior seasons and between her delightful rounds of highly contagious giggles. She tweaked her technique, determined to add firepower to her explosiveness from a start block.

Don’t be surprised if she’s asked to serve as a consultant during filming of the next Fast and Furious flick.

“I’d never seen a sprinter come off a block like Taylor does,” Palmberg marvels. “She’s powerful and quick, with acceleration—incredible accel- eration. What she accomplished at state this year, looking at her margins of victory in particular, was not normal. After sprints you usually have to wait a while to find out who won because so many sprinters seem to finish together, at around the same time.

“Not this year,” the coach adds. “Taylor built sizable leads in both races. It was clear, immediately, who had won each sprint this year.”

Last fall, in Palmberg’s office, Gilling consumed her favorite Jimmy John’s lunch order: a Turkey Tom, with lettuce and tomatoes. No cheese, no mayo. The occasion? A celebration in mid-November, Gilling having signed a letter-of-intent earlier that day to study nursing and hit the track oval for the women’s team at the University of Wisconsin-Madison.

“She was happy all day, giggling a lot,” Palmberg recalls, adding Gilling’s teammates at her Mount Prospect-based track club, TNT, call her “Giggles.” After that lunch we had together, a lot of excitement followed. Both of us, at that point, started to really look forward to the season.

“We’d been talking big things for a while.”

But that didn’t stop Gilling from winning, winning, and winning some more.

Spring arrived, finally, at the state meet. Or was it summer?
The high temp in Charleston on May 18 was 86 degrees.

“Taylor did a nice job taking care of herself all day,” Palmberg says. “She stayed out of the sun. She stayed focused. She sure rose to the occasion in the warm weather. It all came together for Taylor.”

Each victory at state is worth 10 points. Gilling’s 20 points—also her team’s point total at state, good for a tie for 14th place—broke the program record (14 points) she had set last year for most points amassed by an athlete at a state meet.

“Elite athletes aren’t always approachable people,” Palmberg says. “But Taylor, with all of her talent and outstanding work ethic, was approachable to her teammates. She was a mentor to them, a teacher, and she helped them gently. Taylor had time for everyone because she valued her teammates.

“Teammates respected her,” the coach adds. “They also appreciated her track knowledge.”

After collecting her second gold medal of the day at state, Gilling hustled home using an entirely different set of wheels—the ones that don’t need footwear.

A vehicle delivered Gilling to her school’s prom.

The color of her dress?
“Gold,” the two-time state champ says.