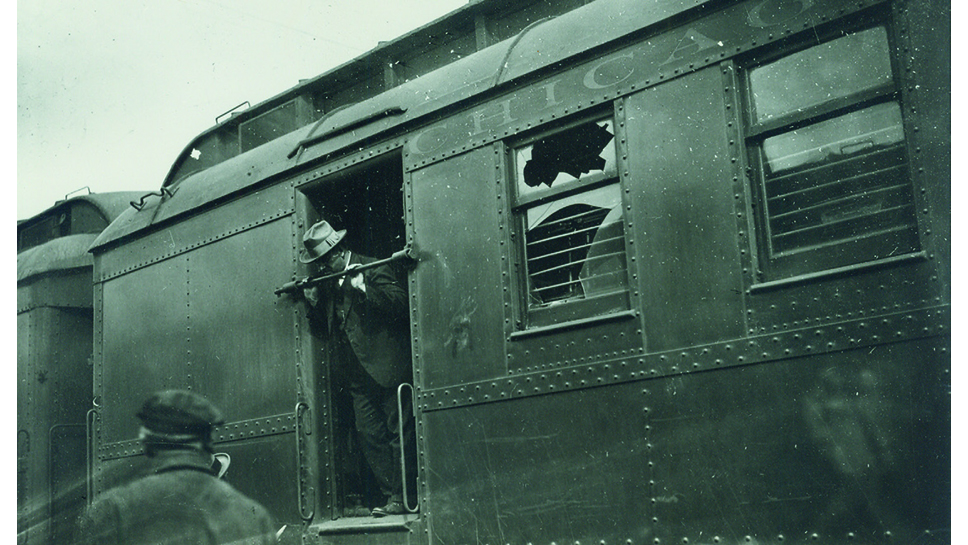 A postal inspector looks over the mail car on the C.M.& St. Paul mail and express train that was held up near Rondout on June 12, 1924. Bandits hurled tear bombs through a smashed window to subdue mail clerks. The robbers made off with more than $2 million in cash, liberty bonds, and other valuables.The photo was made upon the train’s arrival in St. Paul. PHOTO COURTESY OF THE LIBERTYVILLE- MUNDELEIN HISTORICAL SOCIETY

North Shore residents pride themselves on knowing their local history. But did you know that on the evening of June 12, 1924, a gang of Texas outlaws stopped a train just north of Lake Bluff and pulled off one of the biggest heists in the nation?

Sure, there is a historical marker on Route 176 near Roundout that marks the spot where the notorious Newton Brothers and their accomplices got away with more than $2 million in cash and other valuables. However, the story has been more well-known nationally than here locally (Matthew McConaughey even starred in The Newton Boys, a 1998 comedy-drama about their outlaw escapades).

Next week, that’s about to change.

The presentation will revisit the Rondout train robbery story in detail and get to the bottom of how it happened. What were these Texas hoodlums doing in Illinois anyway? How were they caught, what happened to the loot, and what happened to the robbers? In their later years, the Newton broth- ers were the subject of social history research on crime in the early part of the 20th century. In addition to the 1998 movie, this research resulted in several articles and books, as well as TV appearances.

This new series is another example that Lake Bluff History Museum is more than a museum. The organization researches, preserves, and shares area history through a variety of activities and events, including programs like these tours. Museum displays tell stories of Lake Bluff ’s past and its archives provide individuals with access to documents, records, photographs, and other materials preserved in the museum archives.

Tickets to the program are $25 and include a cocktail and light snacks. North Shore Distillery is located at 13990 Rockland Road in Libertyville. Purchase tickets online at lakebluffhistory.org/events.

Tickets will be sold at the door on a space-available basis.