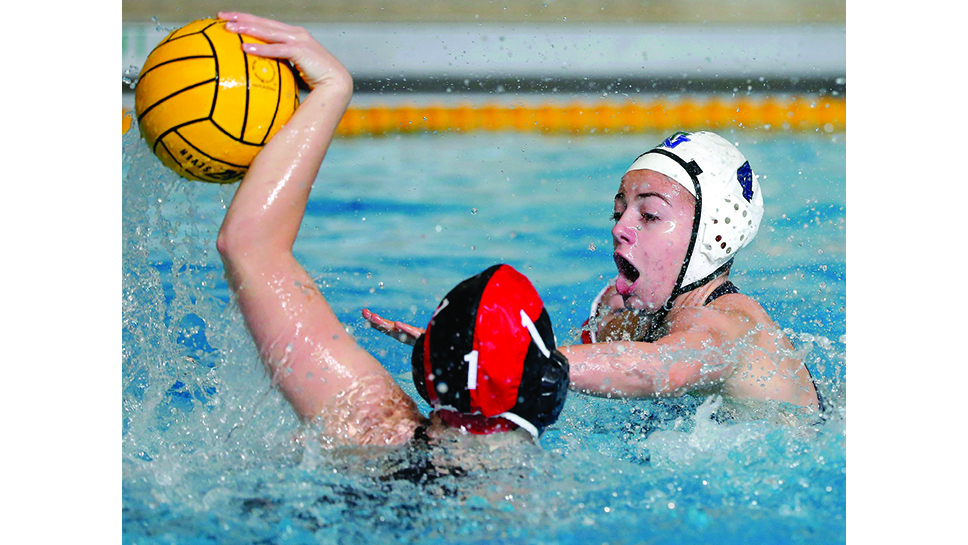 “I heard his voice in my head as I took tests in school,”a smiling Beacom said. “And what I heard most of the time had something to do with patience.

The student in Beacom aided New Trier in its 8-3 defeat of Conant High School’s formidable Cougars in a state quarterfinal on May 16. She made nine saves against a team that had lost only twice in 33 games and entered the SHS natatorium on a 10-game winning streak.

“Maddie,” Wendt said, “did her homework, and you could tell because she was in the right spot at the right time many times. Maddie was a star tonight. Tough; Maddie was tough.”

So were New Trier’s next two foes at state. Wendt’s crew lost an 11-6 semifinal to Naperville North on May 18 and bowed 11-6 to Mother McAuley in the third-place game later in the day.

New Trier’s fourth-place effort in Lincolnshire last weekend was the program’s best state finish since its runner-up showing to Stevenson in 2015.

Wendt assumed the helm at New Trier in 2010, and seven of his 10 squads ended up among the state’s Elite Eight.

His daughter, freshman defender Emma Wendt, scored two goals—on two attempts—in the quarterfinal win against Conant, which didn’t tally its second goal until the 4:17 mark of the fourth quarter.

“I liked the confidence Emma showed while taking those shots,” Matt Wendt said.

Trevians senior tri-captain Leah Caywood and sophomore Emily McKenzie also netted a pair of goals in the team’s seventh consecutive victory; NT sophomore Bridget McKenna and junior Emilia Zientara contributed one apiece in a clash that was tied at 1 at the half.

Neither team scored in the first quarter.

Only one team lost its top scoring threat in the first quarter. Cougars senior 2-meter/utility Olivia Olszewski, who had scored 155 goals in 33 games, missed her first three shots against New Trier before picking up her third exclusion (major foul) with about 90 seconds remaining in the period.

Olszewski had to sit out for the rest of the game.

“She’s a wonderful player,” Matt Wendt said. “With her out, that changed the game.”

New Trier scored six unanswered goals in the second half to secure a 7-1 advantage. Caywood beat Conant’s goalkeeper twice in a little more than a minute in the third quarter, first on a deft loft shot and then off a nice lead pass from senior Ana Kirie.

The second tally upped NT’s lead to 4-1. Caywood and Kirie swam toward each other near mid-pool after the goal, with the former extending her right fist. Kirie bumped it gently with her right fist.

“We’re a tight-knit team, and many who played tonight for us had never competed in a game at state,” Caywood, a shrewd and passionate polo player,said after the quarterfinal.“Emma [Wendt] takes coaching so well. She’s full effort, full energy, all the time; you saw that from her tonight.

“What our coaches stress all the time is, ‘Every possession is a new beginning.’ You want to think that way in games, especially in a close game or when your team is behind.”

New Trier won at least 20 games for the fifth straight season this spring. Its nine losses in 2019? All came against Elite Eight squads.

New Trier boys water polo: A tough state quarterfinal loss last weekend failed to dishearten New Trier boys water polo coach David Rafferty-Flatter. “There’s no better time of the year than this,” Rafferty-Flatter said after his Trevians fell 8-7 in overtime to Lincoln-Way East’s Griffins at Stevenson High School on May 17. “That game was awesome, with the sportsmanship and competitiveness displayed, along with the camaraderie.”

His club scored three of the game’s first four goals, led 4-3 early in the third quarter, and trailed 6-5 at the 6:17 mark of the fourth frame.The teams called a combined three timeouts in the final 2:57 before NT junior Nick DiPatri’s goal tied it at 6 with only 6.8 seconds left in regulation.

Senior quad-captain Matt Ghiselli had chucked a perfect pass to DiPatri from the right wing.

“He found his voice as a leader this year,” Rafferty-Flatter said of Ghiselli, who poured in three goals and finished with a team-high 62 tallies in 2019. “At one point in our sectional final [against Evanston Township High School, on May 11], Matt reminded his teammates, ‘Be positive, be positive, be positive.’ We needed to hear that. We’re going to miss him.”

Lincoln-Way East (23-8) struck for the only goal in the first of two three-minute OT segments. NT junior utility Will Clark skipped a five-meter penalty shot past the Griffins’goalie, cutting East’s lead to 8-7 at 2:15 of the second OT segment.

DiPatri scored twice, and NT senior utility Eli Cohen recorded his goal in the first minute of the contest.

Senior 2-meter/defender Bo Barrett delivered two assists for New Trier (21-13), which won only seven of its first 15 games this spring.

“Our schedule was tough,” Rafferty-Flatter said. “But we didn’t mind taking those losses because we knew they’d get us ready for the big games at the end of the season.”

NT’s Elite Eight appearance at state last weekend was the program’s fourth in five years and first since falling 10-9 in three overtimes to Stevenson in the 2017 state championship game.